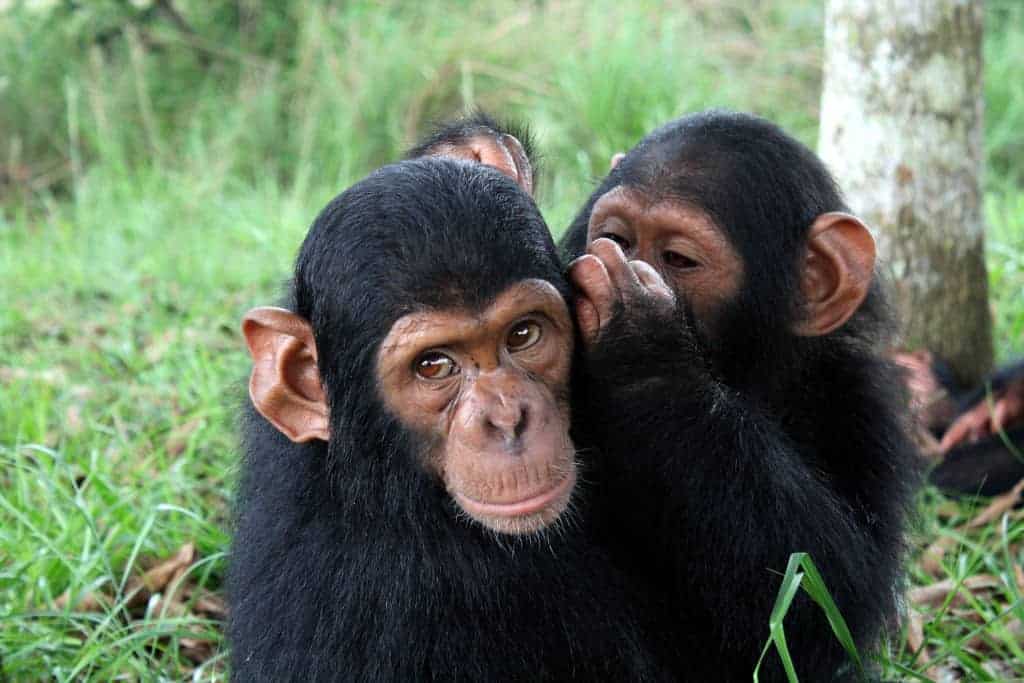 In one of the most dangerous regions of the planet, against all odds, a huge yet mysterious population of chimpanzees appears to be thriving – for now. Harboured by the remote and pristine forests in the north of the Democratic Republic of Congo (DRC) and on the border of the Central African Republic, the chimps were completely unknown until recently – apart from the local legends of giant apes that ate lions and howled at the moon.

But researchers who trekked thousands of kilometres through uncharted territory and dodged armed poachers and rogue militia, now believe the group are one of the last thriving chimp “mega-cultures”.

“This is one of the few places left on Earth with a huge continuous population of chimps,” says Cleve Hicks, a primatologist based at the Max Planck Institute in Leipzig, Germany, who says the group is probably the largest in Africa. “We estimate many thousands of individuals, perhaps tens of thousands.” A unique set of customs and behaviour is shared by the apes across a vast area of 50,000 sq km, revealing how they live naturally.

A mother chimp passing her tool-use expertise to her young

The unusually large chimps of the Bili-Uele forest have been seen feasting on leopard and build ground nests far more often than other chimps, as well as having a unique taste for giant African snails, whose shells they appear to pound open on rocks or logs. Motion-activated video cameras left in the forest for eight months also recorded gangs of males patrolling their territory and mothers showing their young how to use tools to eat swarming insects – although the footage did not confirm the lunar howls.

Gangs of males patrolling their territory

The camera traps also revealed an extraordinary range of other forest dwellers, including forest elephants, olive baboons, spotted hyena as well as red river and giant forest hogs, crested guinea fowl and aardvark. “We saw incredible amounts of wildlife on our camera traps, but we did not catch a single film of a human,” says Hicks. “It remains one of the last untouched wildernesses in Africa.”

One camera even recorded its own destruction as it came under attack from a leopard, but all two dozen cameras were nearly lost when poachers invaded the area and burned the researchers’ camp. Only a swift two-day rescue mission retrieved the footage.

Hick’s team first identified the existence of the Bili chimps in 2007 but their new survey, published this week in the journal Biological Conservation, reveals a vast, thriving mega-culture. Elsewhere in Africa, human damage has fragmented the continent’s chimp population from many millions to just a few hundred thousand over the last century.

However, while the chimp numbers have apparently remained stable, the numbers of forest elephants have crashed by half due to poaching. The slaughter, to feed the highly lucrative illegal ivory trade, mirrors the bloody picture across central Africa, where two-thirds of all forest elephants have been killed in the last decade. “We found the burned skulls of a mother and baby skull at a poachers camp,” says Hicks.

Footage of elephant skulls, a sign poachers are venturing deeper into forests to hunt elephants

“The area is at great risk of being opened up,” says John Hart, one of the team and who has spent decades in DRC at the Lukuru Wildlife Research Foundation. The team’s work was interrupted previously by gunmen protecting illegal gold mining operations in nearby areas but the security situation is getting worse, Hart told the Guardian. Speaking from the town of Kisangani, on the eve of returning to the forest, he said: “The Lord’s Resistance Army are moving through the area as we speak. Also refugees from the Central African Republic (CAR) war and armed brigands from the CAR’s Seleka and opposition groups are establishing bases in the region.”

The researchers fear that these increasing incursions into the virgin forest will draw in more hunters seeking to feed the enormous bushmeat trade in the Congo basin, that targets chimps and other animals. “The incredible bushmeat trade we discovered [in the southern part of the forest in 2010] was totally without precedent.” Hart says, with an estimated 440 chimps being killed a year. “But with the availability of bushmeat declining elsewhere, commercial bushmeat hunters are going further and further into the forest.”

The chimps are an endangered species and fully protected in DRC law. “But it is only a law on paper,” says Hicks, who identifies both official security forces and militia as the source of much of the danger, as well as endemic corruption. “I think the military are giving guns to the poachers.” He says the forest and the chimp mega-culture it contains are currently completely unprotected. 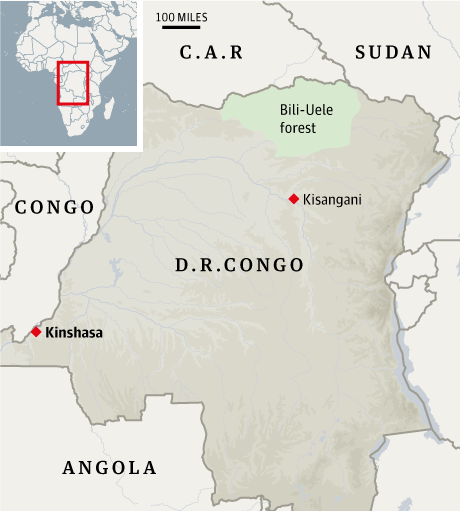 The prime minister, David Cameron, and Prince William are due to host the highest level global summit to date on combating the $19bn-a-year illegal wildlife trade in London next Thursday. Delegates from more than 50 nations, including all African countries, will focus on the poaching crisis facing elephants and other species, which is not only driving many towards extinction but is strongly linked to international organised crime and the poverty of many vulnerable communities. The aim is to deliver an unprecedented political commitment, along with an action plan and funding pledges, and Hicks says the Bili-Uele forest is in need of urgent help.

“It is one of the last great expanses of pristine African wilderness,” he says. “Elephants have already taken a major hit and unless we can muster the resolve to protect this precious area, we are at risk of losing it forever. At the very minimum need 20 wildlife guards who are able to sweep through the forest and set up roadblocks to stop the poachers and other hunters.”

Hart agrees: “It is a very significant opportunity to preserve a whole ecosystem of chimpanzees: elsewhere on this continent this opportunity just does not exist.”

This article was written by Danian Carrington for the Guardian.