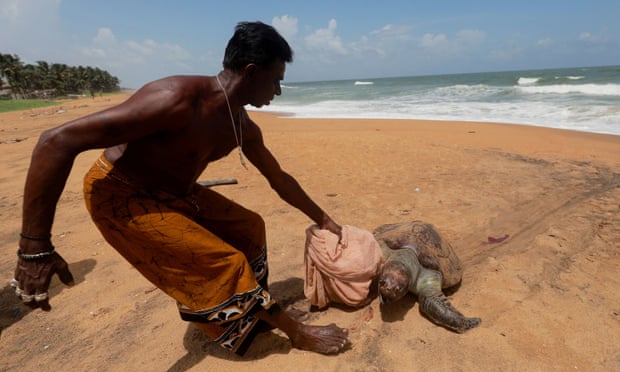 Hundreds of turtles have washed ashore after a ship caught fire and sank off the west coast of Sri Lanka in June in the country’s worst-ever marine disaster, a court in the capital Colombo has heard.

A fire erupted on the Singapore-registered MV X-Press Pearl on 20 May, carrying 1,486 containers, including 25 tonnes of nitric acid along with other chemicals and cosmetics. It sank on 2 June as a salvage crew tried to tow the vessel away from the coast.

The Russian captain of the ship appeared in court on Thursday but has yet to be charged in a case environmental experts say is Sri Lanka’s worst man-made environmental disaster.

The toxins released from the ship have killed 176 turtles, 20 dolphins and four whales, deputy solicitor general, Madawa Tennakoon, said at an initial court hearing on Wednesday.

A video by a local television station seen by Reuters showed carcasses of dead sea turtles and countless plastic pellets scattered over the shore with several volunteers working to clear them.

“There were more than 190 items of cargo (on the ship) and most of it was plastic-based,” environment minister Mahinda Amaraweera told reporters.

“During the south-western monsoon season, sea creatures never die in this way. Most of these carcasses are found on the west coast directly affected by the shipwreck.”

The government has named 15 people – including the captain, Tyutkalo Vitaly – as co-accused in cases over the damage caused. Vitaly made no comment when leaving the court on Thursday after the procedural hearing and could not be reached for further comment. He has been barred from leaving the country.

Authorities said last week they had lifted a ban on fishing in parts of the affected coast, though experts say risks to marine life from the disaster remain.

This article by Reuters was published by The Guardian on 2 July 2021. Lead Image: A man pulls a dead sea turtle that was washed ashore on a beach weeks after the MV X-Press Pearl container ship caught fire and sank off the coast of Colombo, in Mount Lavinia, Sri Lanka 24 June 2021. Photograph: Dinuka Liyanawatte/Reuters.