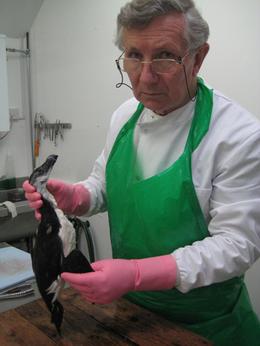 Conservationists are saddened and extremely concerned about the continued deaths of seabirds caught in nets in west Cornwall. On just one day in early January, an estimated 200 birds were found in a net to the north of St Ives and others washed up on local beaches. The Cornwall Inshore Fisheries and Conservation Authority (CIFCA) has now used a local bylaw to close part of the fishery due to birds being caught in nets nearby.

Paul St Pierre, RSPB Conservation Officer in Cornwall said: ‘This is of great concern. At this time of the year birds such as guillemots and razorbills are frequently found near the coast feeding on sprats in the same areas used by local fishermen.’

Birds are trapped in nets and then drownHe added: ‘Unfortunately conditions have conspired to bring them into greater proximity than normal with the result that large numbers of birds are being trapped in the nets and drowning.’

Cornwall Wildlife Trust picked up a number of dead birds from Porthmeor Beach over the weekend. These were examined by a local vet and their deaths were found to entirely consistent with drowning while feeding on sprats.

Ruth Williams, marine conservation manager at Cornwall Wildlife Trustsaid: ‘The birds that have been examined were healthy, had very recently been feeding, but had definitely died as a result of drowning in these nets.

‘We feel confident fishermen will act responsibly’‘This is a sad event, but we praise the CIFCA officers for their rapid intervention and enforcement of the by-law. Unfortunately, the area covered by this by-law is very small and the issue has continued outside the recently closed area of the bay, so we would hope that as part of their investigation and future discussions, the CIFCA may see fit to extend the area covered by it to give the protection needed to these seabirds.’

Conservationists are now urging local fishermen to work with CIFCA on a solution to the problem outside of the area covered by this bylaw.

Paul St Pierre said: ‘We have been talking with CIFCA and think there are a number of potential solutions to this immediate problem that should be explored such as restricting the setting of nets to the hours of darkness in the short term. Seabirds only feed by day so this could reduce much of this bycatch.

No clear plan to tackle problem in European waters‘We feel confident that we can rely on fishermen to act responsibly for the benefit of the birds with the encouragement of CIFCA. However, all parties do need to act quickly.’

The issue of bird bycatch around St Ives highlights a wider issue at a European level. Although much good work has been done in the southern oceans to prevent this with respect to albatross, there has to date been no clear and coherent plan to tackle bycatch of seabirds in European waters. This is of concern for a large number of seabirds, including the globally endangered Balearic shearwater that regularly feeds off north Cornwall at this time of year.

Paul St Pierre added: ‘The introduction of an action plan to tackle seabird bycatch in Europe is sadly much delayed, but we feel these awful incidents over the past week are a further reminder of the need for urgent action.’