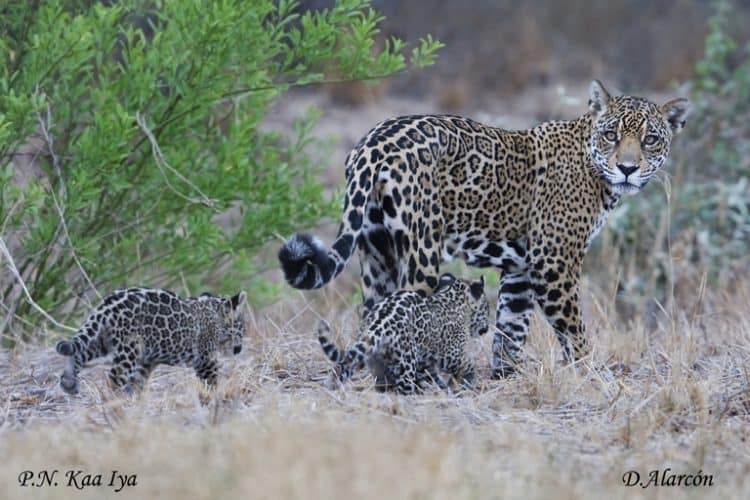 New research finds that one-third of critical jaguar habitat in the Gran Chaco, South America’s largest tropical dry forest, has been lost since the mid-1980s.

According to the study, led by researchers at Humboldt-Universität zu Berlin (HU Berlin) and published in the journal Diversity and Distributions this week, deforestation driven by agricultural expansion — mainly for soy and cattle production — has caused the steep decline of jaguar habitat in the region.

Meanwhile, the conversion of jaguar habitat into cropland and pastureland gives hunters easier access to the forest. Thus over-hunting and persecution by cattle ranchers has also become one of the chief threats to the survival of the big cat. Jaguars (Panthera onca) are especially vulnerable to hunting because they occur at very low densities and must range over large areas. The species is listed as Near Vulnerable on the IUCN Red List.

Alfredo Romero-Muñoz of HU Berlin’s Geography Department, the study’s lead author, told Mongabay that the 82,000 square kilometers (nearly 20 million acres) of jaguar habitat lost between 1985 and 2013 represents an area the size of Austria.

“Furthermore, by 2013, a third of the remaining jaguar range was affected by both threats simultaneously. Jaguars may be at higher risk of disappearing — if they are not already gone — from these latter areas as both threats may interact and multiply their impact.”

“It is this synergistic cycle of deforestation, and hunting or poisoning, that are now the principle threats looming over one-third of the jaguar’s remaining range in the Gran Chaco,” study co-author Anthony Giordano, the director and chief conservation officer of the NGO S.P.E.C.I.E.S., emphasized in a statement.

In order to study how jaguar habitat changed in the Gran Chaco between 1985 and 2013, Romero-Muñoz and team worked with several other jaguar researchers from across the region to compile a comprehensive dataset of jaguar occurrence and the variables that affect the charismatic big cats. The researchers then used computer models to reconstruct jaguar habitat in 1985, 2000, and 2013.

“Our approach doesn’t only allow us to identify key jaguar habitat, but also areas under hunting threats, areas under threats of agricultural expansion, and areas where both interact within jaguar habitat,” Romero-Muñoz explained. “Assessing these maps through time can inform us how habitat changed over the last three decades across the Chaco, and also within countries and inside and outside protected areas.”

Some study findings point to measures that can be taken to safeguard the future of jaguars,the top predator in the Gran Chaco eco-region. Larger protected areas were found to be better at preserving habitat than smaller protected areas, for instance.

“Small protected areas lost jaguar habitat, either because forests were converted inside them, because hunters penetrate protected areas, or because jaguars are killed when they leave the reserves,” study co-author Tobias Kuemmerle, who leads HU Berlin’s Conservation Biogeography Group, said in a statement.

The 1.1-million-kilometer Gran Chaco region extends from southern Bolivia, through western Paraguay, and into northern Argentina. “Among countries, Bolivia lost less key jaguar habitat than Paraguay and Argentina,” Romero-Muñoz said. “The main reason for this difference is probably the large, 3.4 million-hectares, Kaa-Iya National Park. Indeed, we found that larger protected areas lost proportionally less key habitat than smaller ones since the 1980s. However, 95% of the key habitat loss occurred in unprotected areas.”

About 68 percent of the high-quality jaguar habitat that still remains is currently unprotected, the researchers found. But if the governments of Argentina, Bolivia, and Paraguay were to coordinate efforts to protect those areas, most of which are found within 200 kilometers of the countries’ international borders, the big cats might have a shot, the researchers suggest. “Our maps can inform us where conservation actions to save the jaguar should take place,” Kuemmerle said.

Consumers can help play a role in saving the jaguars of the Gran Chaco, as well. “In this increasingly interconnected world, what we eat can have an impact in far-away regions,” Romero-Muñoz said. “Much of the beef produced in the Chaco is exported to Europe and Asia, and soy produced in the Chaco is also exported, mainly to feed animals. Therefore, a way to reduce our potential impacts on jaguars may be to reduce our individual consumption of meat, especially beef.”

This article by Mike Gaworecki was first published on Mongabay.com on 05 Oct 2018.