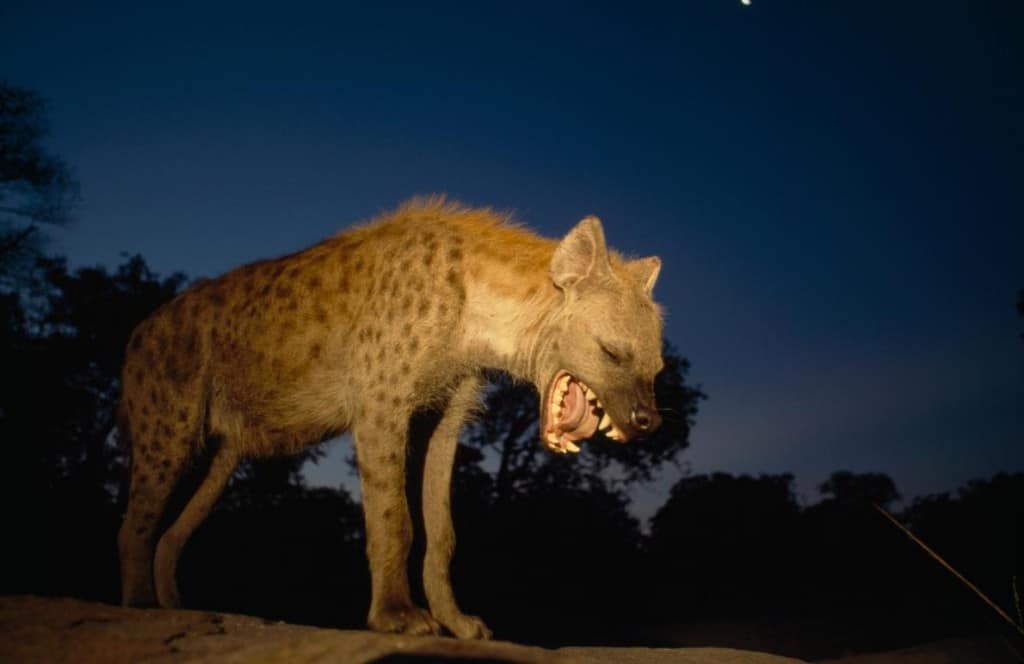 Ugly. Villainous. Thieving. The insults leveled at hyenas are so nasty you’d think they were running for office.

These predators, inhabitants of Africa and Asia, have been maligned for centuries as grave robbers, witches’ steeds, and even “were-hyenas,” according to the International Union for Conservation of Nature’s Hyaena Specialist Group.

In hopes of clearing up some modern misconceptions, Weird Animal Question of the Week took the author’s prerogative to ask, “What are common myths—and truths—about hyenas?”

Truth: Hyenas are brainy as well as brawny.

Spotted hyenas can solve problems by opening puzzle boxes, according to a 2012 study.

Not only that, the animals experiment with a variety of ways to get the job done, which suggests innovative thinking, Sarah Benson-Amram, a zoologist at the University of Wyoming and study co-author, says by email.

They can also count. Sort of.

“Hyenas can accurately assess the number of intruders in their territory,” Benson-Amram says, and will “respond aggressively” only if they outnumber the other side.

The carnivores also form coalitions and strong bonds with their kin, which enables them to coordinate hunts and defend against lions, says Amiyaal Ilany, a postdoctoral researcher at the University of Pennsylvania.

All this despite having less room for their brains than other carnivores: “Hyena skulls evolved to hold the massive muscles they need to chew meat and crush bones.”

Truth: A hyena’s hind legs are shorter than their front legs, which gives them that guilty-looking gait. In reality, though, they’re great endurance runners.

“They are coursing predators,” Benson-Amram says, meaning they “can outrun their prey species, not with speed but with endurance,” like wolves or wild dogs.

As for cowardly … Did we mention fighting with lions?

Truth: Hyenas are neither. They have their own family, Hyaenidae, comprising four species: the spotted hyena, striped hyena, brown hyena, and the aardwolf, which isn’t a wolf but looks like one.

Aard means “earth” in Afrikaans, a language in their native home of southern Africa. Like the aardvark—whose name means “earth pig”—the aardwolf feasts on insects in termite mounds.

Truth: This myth may come from the fact that spotted hyena females are generally bigger than males and have a pseudo-penis.

These pseudo-penises, or pseudophalluses, are paired with “testicles”—actually fused labia filled with fatty tissue. Both sexes get erections when they’re excitedly greeting each other, Benson-Amram says.

These pseudo-penises aren’t just for show: Females give birth through their “penis,” which “has to tear when the first cub passes through,” she says. (Read more about hyena sexual quirks in How Can You Tell a Female Animal from a Male?)

Part of this perception comes from people watching hyenas and lions fighting over a carcass. Many assume that the hyenas are stealing from the lions, but “if you look carefully, the hyenas are often covered in blood,” she says.

That means the hyenas actually made the kill, and the lion then stole the carcass from the hyenas—which are trying to steal it back.

Frankly, scavengers should get more respect—they help keep our world clean and tidy. That’s more than we can say for our own species, which wastes nearly three trillion tons of food a year.

This article was first published by National Geographic on 28 May 2016.