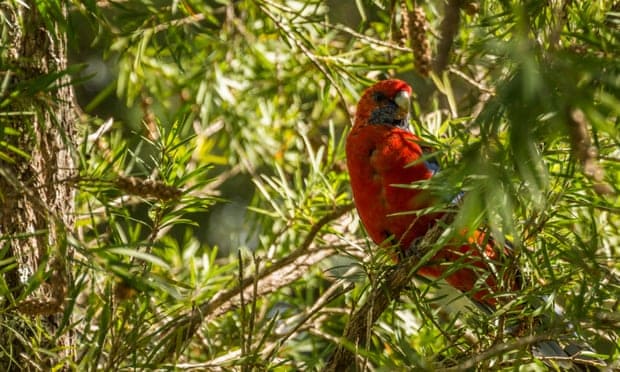 A flash of colour that takes my eye at the age of 10 in 1968 and learning that it is an Adelaide rosella.

Reaching the edge of a vast swamp north of Birdsville in 1982 thinking, “This is perfect habitat for grey grasswrens. They must be here.” And they are! Right at the edge of the road – just the third population ever discovered until then of an inland Australian bird only described to science in 1969.

Seeing a flock of hyacinth macaws, the world’s largest parrot species, on a ranch in central Brazil in 1985.

Or just catching up with the beach stone-curlew north of Broome earlier this year for the first time in, well, too many years!

A silver lining of the pandemic has been knowing that birds are bringing these same kinds of joy to so many others’ lives. For me these joys led me to a career in science where I now have the honour and privilege of being the director of CSIRO’s Australian National Wildlife Collection.

The crimson rosellas that I see every day and which, every day, I think of as stunningly beautiful remind me of those Adelaide rosellas and my journey to a career in ornithology.

Here in lockdown in Canberra, we feel the joy of birds and ornithology whether through the spring return of noisy friarbirds and olive-backed orioles and other migrant species, or through watching the live video feed of Melbourne’s courageous Peregrine falcons at 367 Collins Street.

And yes, I am reminded too often of the tragedies our wildlife face in dealing with humans, our cars, and feral predators.

Australian birders, whether hardened old campaigners or new recruits, can take pride in the role our continent has played in the evolution of birds. From DNA-based research, we know that the world’s songbirds, for example, originated right here and that a distant ancestor of our robins gave rise to the rest of the world’s songbirds.

Some of the most distinctive traits of songbirds arose in Australia such as female song and cooperative breeding (young of previous years help their parents raise more offspring).

Australian songbirds even gifted to the rest of the world’s songbirds the ability to detect sweet tastes.

At least twice, once in hummingbirds and once here early in the evolution of Australian songbirds, birds evolved a workaround to a tough problem: the gene you and I use to detect sweet taste is missing in all birds! Hummingbirds and Australian songbirds co-opted and modified the genetic mechanism for detecting savoury or umami tastes to evolve new ways to detect sweet tastes and so open up entirely new evolutionary pathways.

Every bird has its own unique DNA, right?

For me as a researcher, it has been fascinating to learn just what is going on in birds’ genes that we can’t see when we admire the birds themselves.

The genetic basis to the distinctive appearance of chestnut teal probably lies on one sex chromosome, the Z chromosome.

The mitochondrial DNA of the pale-headed rosella has completely taken over that of the eastern rosella except in Tasmania!

The same piece of DNA of New Guinea’s spot-winged monarchs is in the process of taking over the spectacled monarch’s populations in Australia. That one reminds us that sea level changes affect biodiversity in a big way.

That moment I saw Adelaide rosellas was the moment that my life pivoted.

It also began a lifetime of treasured camaraderie venturing with friends and colleagues into the bush whenever possible to see and study birds.

And that’s how far back in my life I trace a sense of the obligation we humans have to care for the biodiversity that was here first and with which we share our continent.

I cherish never having lost the thrill of seeing birds in the wild, hearing the wondrous diversity of their sounds, and learning about their evolution.

So, this afternoon on my lockdown walk when I go looking for “my” favourite grey currawongs, quietly feeding on the forest floor here in Canberra, I will thank my lucky stars for those Adelaide rosellas.

This article by Leo Joseph was first published by The Guardian on 6 October 2021. Leo Joseph is director of CSIRO’s Australian National Wildlife Collection. Lead Image: ‘I cherish never having lost the thrill of seeing birds in the wild, hearing the wondrous diversity of their sounds, and learning about their evolution.’ Photograph: Gary Clarke/Alamy Stock Photo.