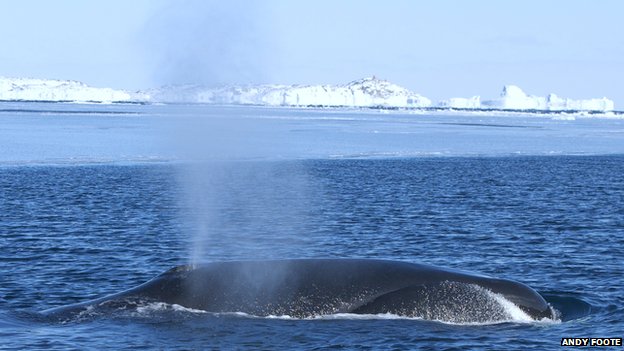 Ancient DNA shows that bowhead whales bucked the trend to survive the last Ice Age, say scientists. The demise of cold-adapted land mammals such as mammoths has been linked to rising temperatures around 11,000 years ago. But researchers were surprised to find a contrasting population boom for whales living off the coast of Britain. Their study is also the first to discover that the ocean giants lived in the southern North Sea.

Dr Andy Foote from the Natural History Museum of Denmark, based at the University of Copenhagen co-authored the paper published in the journal Nature Communications.

“Based on all previous studies using ancient DNA to estimate the population size… it seems the trend was for cold-adapted species either [to] go extinct or decline in numbers at the end of the Ice Age as the temperature increased,” said Dr Foote.

But while the fate of now-extinct land-based Ice Age animals is well documented, little has been known about how marine animals were affected by the rapid temperature warming.

Bowhead whales today are found in Arctic seas and rely on sea ice where they feed on tiny crustaceans.

The research team wanted to find out how the whales fared during the rapid climate change of the Pleistocene-Holocene epoch transition when the essential sea ice retreated from their North Sea habitat.

Scientists analysed ancient DNA of partly-fossilised whale remains found in waters between Britain and Holland and around Denmark and Sweden.

They were able to use the data to create a habitat prediction model and build a picture of the whales’ past movements and probability of survival.

“The retreat of the ice in that particular case actually opened up very large areas where you all of a sudden had these ideal habitat conditions for these Arctic species,” said Dr Kristin Kaschner, research affiliate at the University of Freiburg, Germany.

Explaining why these marine animals may have thrived at the end of the last Ice Age while many land mammals populations declined, she added: “Most marine mammals are used to migrating very long distances anyway… I think that’s one of the things that worked in [the whales’] favour, that they were able to track their habitat.”

“And then that combined with the fact that the retreat of ice actually opened up habitat was really favourable for them.”

According to the model, the area of suitable habitat for bowhead whales tripled during the transitional period and the species saw a significant population increase at the same time.

The results show that Ice Age bowhead whales can be genetically identified as belonging to the same population found in the Arctic today, with lineages surviving from the late Pleistocene through to the current Holocene period.

Bowhead whales are thought to be the longest-living mammal in the world, with some individuals possibly even reaching up to 200 years of age.

But the north-eastern Atlantic bowhead whale population is now under threat from intense whaling, according to the researchers.

Their study also suggests that climate change today could present an “additional threat” to the whales. The team estimates that the Arctic animals’ “core suitable habitat” could almost be halved by the end of the century, potentially influencing future populations.

This article was written by Michelle Warwicker BBC Nature.