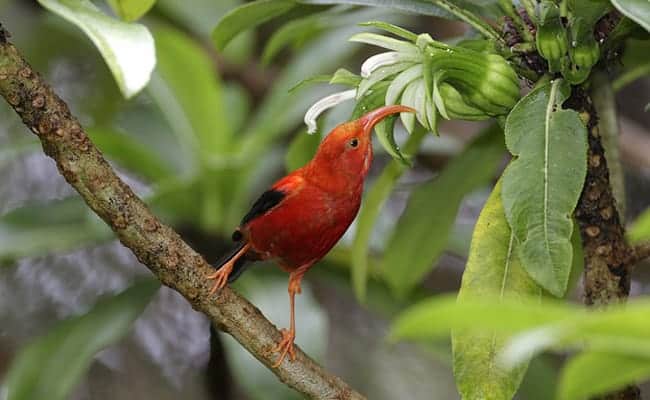 One of Hawaii’s most endangered birds is finally going to receive the protection it desperately needs.

The ‘i’iwi, or scarlet honeycreeper, was once considered one of the most common forest birds in Hawaii, who could be found across all of the major islands. Sadly, they have virtually disappeared from the islands of Lanai, Oahu, Molokai and west Maui, while the population on Kauai is rapidly declining.

Now, 90 percent of their population exists only on East Maui and Hawaii Island (Big Island) at elevations between 4,265 and 6,234 feet.

Back in 2010, the Center for Biological Diversity petitioned authorities to list them as “threatened”under the Endangered Species Act (ESA). And now the FWS has announced that the ‘i’iwi will be listed as”threatened” — bringing hope that the species will not be wiped out.

Although these striking birds face a number of threats, one of their biggest problems today is the spread of disease that’s being exacerbated by climate change. Avian malaria and avian pox, which are spread by invasive mosquitoes, have devastated Hawaii’s native forest birds, who have little to no resistance to these diseases. According to the U.S. Fish and Wildlife Service (FWS), avian malaria kills approximately 95 percent of ‘i’iwi who are infected, and the problem is only expected to get worse.

“‘I’iwi have virtually disappeared from any habitat where mosquitoes are found,” said Mary Abrams, project leader for the FWS’s Pacific Islands Fish and Wildlife Office. “This has caused their range to shrink dramatically – they are almost entirely limited to higher elevation ‘ohi’a forests for their habitat, dietary, and nesting needs.”

The ‘i’iwi still have some refuge in higher elevations, where it’s too cold for mosquitoes, but these birds travel widely in search of food, and scientists have raised concerns that as the climate gets warmer and wetter, mosquitoes will be moving up into areas that are currently considered safe, further restricting their already limited range. Even more concerning is that the ‘ohi’a forests these birds rely on are suffering from a deadly disease themselves that’s wiping out trees.

“In recent years, the ‘i’iwi population has been in sharp decline, due to threats from habitat loss, invasive species and avian diseases, particularly avian malaria,” said Abrams. “These threats have affected all forest birds, not just the ‘i’iwi. Conservation that benefits the ‘i’iwi will undoubtedly benefit other Hawaiian forest birds.”

The listing will be official on October 20, and will first lead to the development of a recovery plan, which will hopefully be followed by other measures that will restore and protect their habitat, reduce other threats, and stop the spread of diseases.

“Working with the state, our conservation partners and the public will be crucial as we work to recover the ‘i’iwi,” added Abrams. “The Service is committed to building on our record of collaborative conservation to protect Hawaii’s native species.”