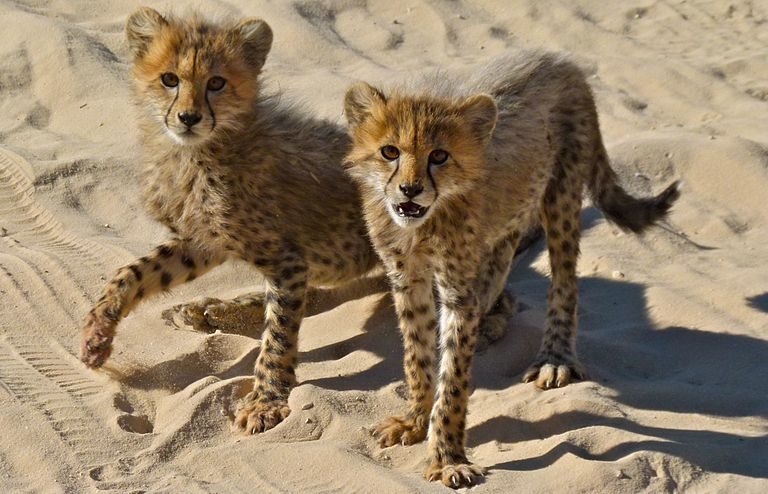 Cheetahs continue to be illegally traded through social media platforms, according to a new analysis published by theCheetah Conservation Fund (CCF), a non-profit research and lobby organization based in Namibia.

Between February 2012 and July 2018, a total of 1,367 cheetahs (Acinonyx jubatus) were offered on sale through 906 posts on social media, the analysis found, with Instagram alone accounting for some 77 percent of the offerings. A Kuwait-based mobile application, 4sale, and YouTube accounted for 11 percent of the posts.

With wild cheetah populations now down to just 7,100 individuals, a decline of more than 90 percent since the turn of the 20th century, illegal trade of the animal presents an urgent threat to the species.

“Whether it is online or at an animal market, the sale of live cheetah cubs can be devastating to the wild populations in the areas where they seem to originate: eastern Ethiopia, northern Kenya and Somalia/Somaliland,” Patricia Tricorache, assistant director, strategic communications and illegal wildlife trade at the CCF, said in an email. “Unfortunately little is known about how many wild cheetah exist in those areas, but it is likely that they range in the few hundreds and [are] rapidly diminishing if our estimates are correct — that is, 300 cheetah cubs per year being smuggled out of those areas for the illegal pet trade in the Gulf States. Many more die.”

The CCF started recording incidents of illegal cheetah trade after rescuing two cheetah cubs that had been tied to ropes at a restaurant in Ethiopia in 2005. This garnered a lot of publicity, followed by multiple reports of cheetahs being illegally traded in East Africa and the Middle East.

“This was when we realized that the trade was of a greater magnitude than we ever imagined,” Tricorache said. “Subsequently, we began receiving reports of cheetahs being offered for sale online, and while many of these reports were obvious scams, we also found many that seemed veridic, so we started keeping records of those.”

To determine the scale of the online trade, CCF began monitoring and compiling online cheetah sale offers from 2012, when most accounts appeared to have been opened. For each cheetah-related post they came across, the team uncovered many more by sifting through the comments.

“At times I had a dozen tabs open on my browser,” Tricorache said. “Some of those accounts showed images of multiple cubs. The images that appeared to be real, that is, not taken from the internet as the scam adverts, were both worrisome and heart wrenching, as many of the cubs were very small and appeared very unhealthy.”

The number of recorded online posts, at least on Instagram, YouTube and 4sale, were the highest between 2014 and 2016, then seemed to have declined since 2017. It is, however, unclear if the decline is an indication of an overall decrease in cheetah trade, or if the sellers have shifted to private accounts or to different, currently undocumented online platforms.

Today, the cheetah is listed under Appendix I of the Convention on International Trade in Endangered Species of Wild Fauna and Flora (CITES), which means that international trade in the species is prohibited. All of the investigated cheetah sale offers on social media appear to be illegal.

“None of the adverts I’ve saved indicate the existence of permits and as far as I recall, none mention captive breeding,”Tricorache said. “I can tell you that if there were CITES permits, they would be on the CITES trade database and I have not found any indications of legal trade in those markets other than some known to us. Additionally, captive breeding of cheetahs is extremely difficult, so the legal breeders would not be able to satisfy the demand judging by the numbers we’ve seen of cheetah adverts and cheetah owners.”

Analysis of the posts showed that nearly all of them had some link to the Gulf states. In particular, more than 62 percent of the posts had a link to Saudi Arabia, determined either via the location stated in the post or the phone numbers provided by users or in the post. This was followed by offers linked to Kuwait,the United Arab Emirates and Qatar. The top four users advertising cheetahs on their accounts also appeared to be operating from Saudi Arabia.

While the international trade in cheetahs is banned, cheetah ownership laws within the Middle East are unclear at the moment.

“In the Gulf States, where cheetahs and other exotic animals are in high demand as pets, trade in cheetahs is illegal, but ownership laws might not be quite clear, except for the UAE, where a new law was enacted in December 2016 outlawing private ownership of exotic and dangerous pets,” Tricorache said. “In general, the reason for more adverts linked to Saudi Arabia might be simply because the country is the largest in area and has the largest population of the GCC [Gulf Cooperation Council] States (more than triple the next largest population of the UAE).”

Cheetahs in Africa are already struggling to survive amid conversion of their grassland habitat for agriculture, and increased human-wildlife conflict. Illegal trade of cheetahs only adds to the burden, with the threat impacting smaller, fragmented populations in East Africa the most, said Laurie Marker, the CCF founder andexecutive director.

“Already vulnerable cheetah populations, particularly those in Ethiopia and Somalia, are at risk of local extinction because of poaching for the illegal pettrade,” she said.

Keeping cheetahs as pets also does nothing to help conservation of the species, Tricorache added.

“A cheetah raised in captivity from a very young age — most cubs are taken as young as 3 weeks old — will hardly be able to survive if returned to the wild,” she said. “Having been raised by humans, they would probably look for people and end up in conflict situations where they could either get killed or be taken again for the trade. Moreover, cubs stolen from their mothers are usually treated poorly. Every cub we have received after a confiscation has shown symptoms of ill treatment, whether due to malnourishment, dehydration or abuse. For many, confiscation comes too late.

“It is important also for people who follow exotic pet owners or sellers on social media to understand that many of these animals might have been acquired illegally and that supporting those posts with likes only makes the illegal pet trade more attractive for those who engage in it.”

This article by Shreya Dasgupta was first published on Mongabay.com on 22 Oct 2018.