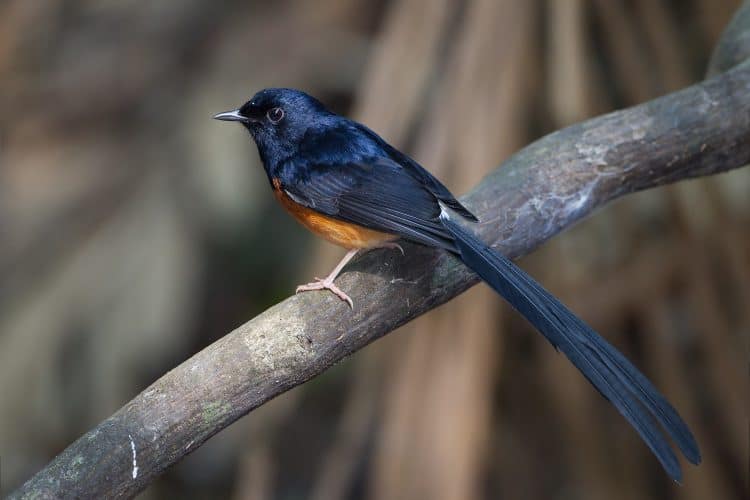 More young birds survived near a road through a Thai forest than those living deeper in the forest where more predators lurked, researchers found during a recent study.

The disruptive impacts of roads on ecosystems are well-documented, and studies in temperate parts of the planet have shown that fewer fledglings survive to adulthood along the edges of roads.

But understanding how tropical birds fare has been more difficult because it’s tough to find enough nests to produce an adequate sample size, Rongrong Angkaew, an ecologist at King Mongkut’s University of Technology Thonburi in Thailand, told Mongabay.

At the Sakaerat Environmental Research Station, however, a common songbird called a white-rumped shama (Copsychus malabaricus) uses nest boxes effectively, making it “an ideal species for testing edge effects,” she said in an email.

Angkaew and her colleagues set up 200 nest boxes in Sakaerat’s primary and secondary forests north of Bangkok. They placed 100 within 200 meters (656 feet) of Route 304, a busy, five-lane highway that has cut through the reserve for more than 60 years. The others were installed at least 1 kilometer (0.6 miles) from the road. The team then harnessed tiny radio transmitters to fledglings that had survived long enough to be able to leave their nests.

For the next seven weeks, they followed 50 fledglings, 25 from each set of boxes. They estimate that fledglings from nests near the road had a nearly 24 percent higher survival rate. Similarly, they found that these nests were 11.6 percent more likely to be successful — that is, they existed long enough for the birds to become fledglings — than nests inside the forest over the seven-week period. The team reported their findings in the February 2019 issue of the journal The Condor: Ornithological Applications.

Predators caused all of the nest failures, and they killed most of the fledglings that died during the study. Other research in the same region found that northern pig-tailed macaques (Macaca leonina) and green cat snakes (Boiga cyanea) frequently raid bird nests.

Angkaew said they were able to confirm that green cat snakes ate several of the baby shamas, one from the edge boxes and five from deeper in the forest.

“One day we followed the signals from radio transmitters, but instead of finding the fledgling we found the snake,” she said, “and thus we can confirm that our bird was eaten by this snake.”

The team believes that the denser understory vegetation — comprising not a higher concentration of trees but more tangles of vine-like lianas — along the roadway may have done a better job at hiding nests and fledglings that we’re out exploring, at least with the mix of predators found in Sakaerat. Angkaew said further research could help show whether the benefit that the road provided to shama survival was specific to this study site, or if it would hold in places where predators didn’t show such a strong preference for the forest’s interior.

She also noted that as the shama chicks grew, the road continued to impact their behavior. All but one of the birds carrying radio transmitters stayed on their side of the highway. The noise from the cars or the chance of being struck might have discouraged them from crossing, Angkaew said.

“Trade-offs between conservation and development are often unavoidable, so we encourage conservation planners to work with government agencies to minimize adverse impacts on bird communities in protected areas,” she added.

Angkaew said they investigated the impacts for only a subset of one species and not for its broader population in this study. Nor did they look at how the highway tinkers with the species makeup of the bird community in this area.

As a result, she said, “planners should avoid road development in forests of high conservation value to reduce impacts on biodiversity.”

John Cannon is a Mongabay staff writer based in the Middle East. Find him on Twitter: @johnccannon

This article by John Cannon was first published on Mongabay.com on 21 Feb 2019.

“More young birds survived near a road through a Thai forest than those living deeper in the forest where more predators lurked, researchers found during a recent study.

The disruptive impacts of roads on ecosystems are well-documented, and studies in temperate parts of the planet have shown that fewer fledglings survive to adulthood along the edges of roads.”