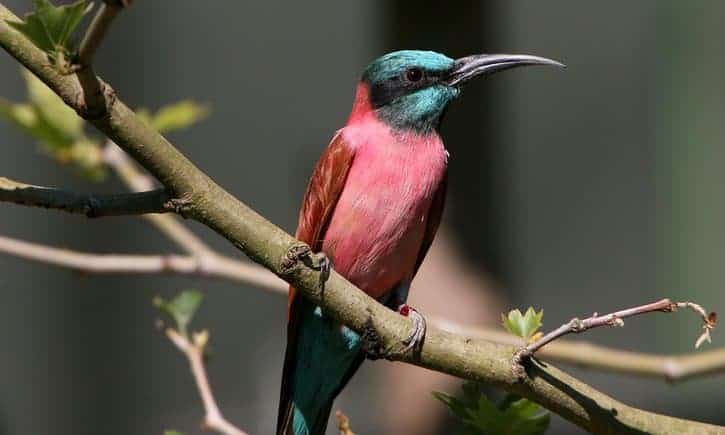 Bee-eaters are the supermodels of the bird world: slim, glamorous – and hopelessly out of reach for us mere mortals. But in the Selous Game Reserve, in southern Tanzania, you can see seven different species of bee-eater hawking for insects under sun-filled skies.

Each one sports impossibly beautiful colours, outcompeting even the half-a-dozen species of kingfisher we saw here. On a game drive from Selous Impala Camp, in the heart of Africa’s largest wildlife reserve, we went in search of the “magnificent seven”.

The two commonest species, white-fronted and white-throated, may have similar names, but they are very different in appearance. The white-throated is, by bee-eater standards, almost austere: a plain, foliage green body topped with a black-and-white head.

Its cousin, the white-fronted, is far showier. The underparts are pink, orange and blue, while its back is a stunning emerald green. “Front” refers to the bird’s forehead, a white beacon above a black “highwayman’s mask”.

This plumage feature is shared with all the world’s bee-eaters – it presumably reduces the glare of the sun when the bird is hunting.

Both these and the blue-cheeked bee-eater are best seen on a boat trip along the Rufiji River, the vast, broad waterway that runs right alongside the camp. Blue-cheeked is the slimmest of the seven: an all-green bird with glowing orange underwings, which cut through the air like a steel blade, as it snatches unseen insects from just above the fast-flowing waters.

European bee-eaters are, ironically, far harder to see here – we glimpsed just a couple during our daily game drives. Little bee-eaters were far commoner – tiny jewel-like birds darting out to snatch an insect from their low perch in an acacia.

Even amongst these gorgeous creatures, one species really stands out. The northern carmine bee-eater, its plumage the colour of a fine burgundy, whose acrobatic flight makes it impossible to miss. Carmine bee-eaters have learned that big game animals such as elephants attract insects, so they can often be seen flying low over the savannah amongst these huge beasts, snatching insects as they go.

But elephants are now few and far between in the Selous, because of widespread poaching. So the carmine bee-eaters now follow the safari vehicles that ply to and fro across this sun-baked landscape, as we seem to attract the insects on which they love to feed.

Six down, and one to go. It was our very last morning before we returned to Dar-es-Salaam for our flight back home. So at dawn, we headed out on our final game drive, in search of a comparatively unshowy bird by bee-eater standards – though still a real beauty.

The rare and elusive Böhm’s bee-eater was named after the 19th-century German zoologist and explorer Richard Böhm, who died tragically young, in his late twenties, from malaria. Unlike its cousins, which can often be seen in the open acacia scrub or along the river, Böhm’s bee-eater prefers the denser tropical forest. This, of course, makes it much harder to see.

After several hours of driving we were beginning to give up hope. Then our guide Ezra spotted an unassuming green bee-eater with an orange throat and crown – the very bird we had been looking for. It was a perfect ending to an unforgettable trip.

This article was first published by The Guardian on 19 Feb 2017.