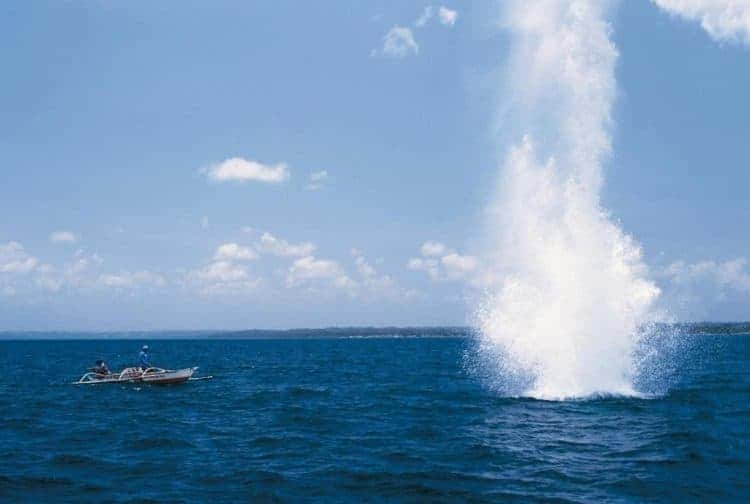 Strewn in the shallows of the Indian Ocean off Tanzania lie shards of dead coral reefs.

Why? Because poor Tanzanian fishermen are using explosives, illegally, to kill hundreds of fish in seconds. Blast fishing, as it’s called, not only destroys large numbers of fish directly—but indirectly as well by killing coral and the rich array of marine animals that depend on it.

Experts believe that in Tanzania, blast fishing is occurring at unprecedented rates, in part because a boom in mining and construction has made it easier for people to get their hands on dynamite.

Blast fishing in Tanzania dates back to the 1960s and was outlawed in 1970. Cheaper and vastly more productive than traditional methods, such as basket traps and hook and line, it’s also dangerous: Errant blasts can shatter limbs, even kill people.

Tossed overboard, one bottle bomb can kill everything within 30 to 100 feet of the blast. The explosion can rupture a fish’s swim bladder, the organ that gives it buoyancy. Most of the dead fish sink, but fishermen are ready with nets to scoop up those that float to the surface.

“With numerous blasts occurring daily on reefs all over the country over a period of several decades,” Greg Wagner, of the University of Dar es Salaam in Tanzania, wrote in a 2004 study, “the overall impact of dynamite fishing on coral reefs in Tanzania has been devastating.”

It was European armies during World War I that introduced dynamite fishing as a way to catch a quick, fresh meal, according to marine expert Michel Bariche. Some countries, such as Kenya and Mozambique, have succeeded in shutting it down, but it still goes on in Lebanon, Malaysia, the Philippines, Indonesia, and Myanmar, among others.

Tanzania is the only country in Africa where blast fishing still occurs on a large scale, says SmartFish, a fisheries program funded by the European Union. When a fisherman can rake in a profit of $1,800 at the Dar es Salaam fish market from a single blast, as the BBC reports, it’s not hard to see why people do it.

At Least Ten Blasts a Day

Davenport and other researchers stumbled upon the intensity of Tanzania’s problem earlier this year. They set out in March to gather information about whale and dolphin species inhabiting Tanzania’s coast. But when they heard more explosions than cetacean whistles on their hydrophone recordings, they decided to analyze those data too.

The researchers counted more than 300 explosions in 30 days, or 231 hours, of underwater recordings from the Tanzania-Kenya border down to Mozambique. “What we wanted to show was how extensive this is,” says Davenport, “and that it’s going all the way up and down the coast.”

Most of the blasts—more than 60 percent—occurred within 50 miles (80 kilometers) of the city of Dar es Salaam, according to a November report, but other hot spots included areas near Songo Songo Island, the Tanga region, and the coastal town of Lindi. Seventy percent of the explosions happened between 9 a.m. and 1 p.m., “suggesting little evidence of concern for the risk of detection by the authorities,” the report notes.

“We caught a snapshot,” says Davenport, who acknowledges that his group isn’t the first to count blasts in Tanzania’s waters. The estimate is conservative because the hydrophones didn’t record in very shallow waters near the shore, where much of blast fishing occurs. Also, fishermen may have taken the day off when the scientists’ boat passed through. Bad weather may have been a deterrent too.

In Tanzania, about two-thirds of the country’s coastline harbors reefs, which support fish, crab, and other species, and play a crucial role in controlling carbon dioxide levels in the ocean. They thrive in the shallows—where blast fishing is most prolific.
Picture of a diver inspecting coral reefs damaged by dynamite

“Some of these corals have been growing for decades,” says Gabby Ahmadia, a marine conservation scientist with the World Wildlife Fund. “When you damage them, it can take decades for them to recover, and sometimes not at all.”

A study of coral reefs in Tanga revealed that fish densities were 12 times higher on a reef with little dynamite damage versus one nearby that was heavily dynamited, the WCS report notes. The report also cites anecdotal evidence that blasts have killed dolphins—the endangered Indo-pacific bottlenose dolphin swim in Tanzania’s waters.

Beyond the environmental damage, blast fishing threatens the livelihood of legitimate fishermen, who’ve blamed dynamite for recent declines in their catch. That’s according to a 2014 report by the Mwambao Coastal Community Network, a nonprofit in Tanzania that’s helping to combat blast fishing.

Then there’s the threat to tourism, which constitutes 17 percent of Tanzania’s gross domestic product. “People won’t be interested in going to the beach if there are explosions and the coral is being systematically destroyed,” Davenport says. If people are scared to swim in the waters because of incidents like this, that’s a big problem.

In June, the Tanzanian government launched the Multi-Agency Task Team to deal with wildlife crimes such as blast fishing. “The focus will be to target the individuals and networks that control this illegal trade, bring them to justice, and seize any assets obtained through their crimes,” Magese Emmanuel Bulayi, a principal fisheries officer in the Ministry of Natural Resources and Tourism, said during a meeting on blast fishing last month.

The task force shows there’s political will to end blast fishing, but it wouldn’t be the first time the country’s tried to clamp down on the practice. “Occasionally it’s been cracked down on, but temporarily,” Davenport says. From 1997 to 2003, the navy and marine police combined forces with local programs to enforce the blast fishing ban.

Scant resources, confusion over who’s supposed to enforce the law, and lenient sentences for offenders have perpetuated the problem. The country’s Fisheries Act of 2003 imposes a minimum of five years for dynamite fishing, but according to marine conservationist Sue Wells, people rarely receive that sentence.

Davenport says he wants the WCS study to help efforts against blast fishing. “I hope that in conjunction with the earlier reports, people will realize that it’s extremely serious, that it’s not going away, and it needs to be tackled.”

This article was first published by National Geographic on 30 Dec 2015.