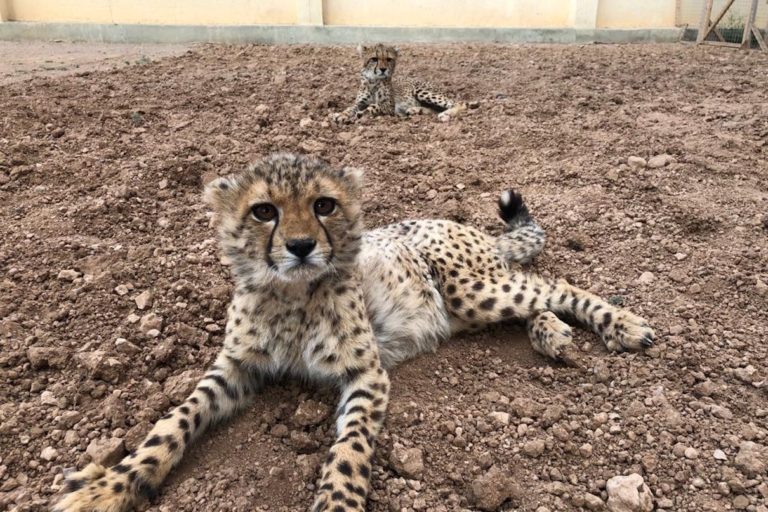 The 8-week-old cheetah cubs should have been with their mother. Instead, they were penned up in a small village near Erigavo, Somaliland, after a group of nomadic livestock farmers chased the mother away and captured the cubs from a nearby cave.

“There were actually three [cubs],” Asma Bileh, a Somaliland veterinarian for the Cheetah Conservation Fund (CCF), told Mongabay. “One died immediately … so they brought back two of them into their houses. They were keeping them for a while.”

When Somaliland’s Ministry of Environment and Rural Development (MoERD) received a tip about the cubs, a rescue team, which included Bileh, traveled to the village on Aug. 22. The baby cheetahs were a little malnourished and dehydrated, having only been fed small portions of goat milk and meat, which hadn’t provided enough sustenance.

These cheetahs (Acinonyx jubatus) are among dozens of cubs that have been rescued by the MoERD-CCF team in Somaliland this year; as of this week, CCF reported a total of 29 rescued cubs since January, three of which have died.

The reason for this onslaught of rescued cubs is human-wildlife conflicts between livestock farmers and wild cheetahs, as well as the illegal demand for wild cheetahs as pets in the Middle East, according to conservationists.

While the global cheetah population is estimated to be around 7,100, the local population in the Horn of Africa is thought to comprise about 300 to 500 adults, says Laurie Marker, a leading expert on cheetahs and executive director of CCF. It’s also thought that up to 300 cheetahs are captured in human-wildlife conflicts and illegally trafficked each year from this region, which puts the local population at extreme risk.

“If there’s up to 300 animals going out, and there’s only 300 adults in the population, it’s only going to be a matter of a few years before there aren’t any other animals out there breeding,” Marker told Mongabay.

‘There’s a lot of hatred for predators’

The Republic of Somaliland, which declared independence from Somalia in 1991 but is not internationally recognized, is a nation of farmers, with livestock production accounting for 60 to 65% of the gross domestic product. Many farmers follow a nomadic lifestyle, traveling across the desert with herds of sheep and goats. But climate change has brought unprecedented challenges to farmers in this small Horn of Africa nation.

A seemingly endless drought has dried up the land, making it difficult for livestock to find food.

“Early in the morning, they [the farmers] release their animals, so they … go looking for pasture and grazing,” Bileh said. “They [the animals] can walk … two hours, three hours, just to look for grass.”

With no one keeping a close eye on the livestock, cheetahs can be quick to find them.

“If the animals are in a cheetah’s territory, the cheetah just doesn’t know that it’s any different than wildlife coming in,” Marker said. “It’s an easy meal and that’s what the predator wants.”

This doesn’t put the cheetahs in a favorable position with the farmers. “There’s a lot of hatred for predators around the nomads and their livestock,” Marker said. In retaliation for harming livestock, farmers may kill the cheetahs, or they simply chase them away, which is surprisingly easy to do, she said.

“They [the farmers] can just yell at them — wave your hands and they’ll run away,” she said. “Of course, they have sticks and they can go after them in a pretty aggressive way, and cheetahs are not an aggressive animal, so they’ll run off.”

If there are cubs, the farmers will often take them into captivity, supposedly for the benefit of having them as “pets,” even though doing so is illegal under Somaliland law.

Bileh, who has interviewed several nomadic farmers on the subject, says farmers keep the cubs with the purpose of taming them. “What they told us is that they want to keep this animal as a pet for a while, and then by the time they grow up, they will not eat the [livestock] animals,” she said.

However, Bileh added it’s also possible they’re keeping the cubs for the opportunity to sell them to wildlife traffickers, and that they’re just telling the MoERD-CCF team what they think they want to hear. In fact, a few farmers have admitted to keeping cubs to sell to traders.

Whatever their intentions, the farmers and their families cannot properly care for the cheetahs in most instances.

“They don’t want to feed them the amount of food that they need … so they’re basically starving,” Marker said. “They’re small animals, and if you understand their metabolic needs, you know they can’t go very long without food or water, because they’re little.”

Nearly all rescued cheetahs are undernourished and dehydrated, and their condition deteriorates the longer they’ve been held in captivity, Marker said.

“We got a [cheetah] that was about eight months of age, and I think they were feeding her twice a week only, throwing her a little piece of maybe camel or goat meat, a little bit of camel milk,” Marker said. “And so these animals … if we don’t get them when they’re young, and they stay with them, they are stunted. We’ve had animals that have had horrible bone malformations from not having enough calcium.

‘Tamer than your pet dog’

In Gulf Cooperation Council states, such as Kuwait, Saudi Arabia and the United Arab Emirates (UAE), wild cheetahs are status symbols and highly desired pets. As a result, countless of the animals are smuggled between the Horn of Africa and the Middle East, with a well-established trade route running between Somaliland and Yemen. This is done despite wild cheetahs being protected under CITES Appendix I, which bans all trade outside of exceptional licensed circumstances.

Of the 300 cheetahs taken in the Horn of Africa each year, Marker said about half are destined for the exotic pet trade in the Middle East. However, these numbers are likely conservative since they don’t consider the cheetahs that may have died during the capture and trading processes, she said.

“They’re tamer than your pet dog basically,” Marker said. “That’s why they love them so much because they are easily tamed.”

Docile though cheetahs may be, most people don’t adequately care for them, Marker said. Their average life expectancy as pets is about one or two years, she added.

Traders who broker the cubs to buyers in the Middle East can get between $3000 and $10,000 per cub, according to CCF. The people who take the cubs from the landscape, on the other hand, may only get $75 to $100 per cub, and those who transport the cubs along the smuggling route can get $300 to $800 per cub, CCF said.

“People in the Middle East, have a lot of disposable income and they … [want] exotic pets,” Marker said. “But we’re trying to make people aware that … cheetahs are not an animal that should be a pet — they’re supposed to be out living in the wild. And they play a very important ecological role in maintaining the health of ecosystems.”

In 2016, the UAE passed a law that banned the private ownership and trade of exotic and dangerous animals. While this has helped slow the trade in the UAE, it hasn’t completely stopped it, according to Elsayed Ahmed Mohamed, a veterinarian and regional director for the Middle East and Northern Africa at the International Fund for Animal Welfare (IFAW).

“We cannot deny that illegal trade still takes place, but we can confirm that it has slowed down in the UAE following the ban,” Mohamed told Mongabay in an email.

However, he said the majority of trafficked cheetahs likely end up in Saudi Arabia, based on the large number of confiscations in that region over the past few years.

And while COVID-19 has reduced a lot of trade around the world, Marker, who keeps a close eye on confiscations and online sales, said the pandemic’s done nothing to affect wild cheetah trafficking.

While Somaliland is not an official signatory to CITES (due to the fact that the country is not internationally recognized), Bashir Goth, a Somaliland representative based in the U.S., says the government has fashioned its laws in line with CITES regulations.

“Illegal wildlife trade does not only pose an existential threat to the already endangered species such as cheetahs, but it also poses a security threat to Somaliland,” Goth told Mongabay in an emailed statement. “We are concerned whether regional and international criminal networks are involved and what other illegal activities such as drugs and or arms could be following suit if we do not fight this as aggressively as we could.

“Somaliland is determined to fight this illegal wildlife trade in the same way it fought piracy and terrorist groups,” he added. “Therefore, we would appreciate [it] if the international community would value and support the work we do as part of a global effort, but we are doing it as a national duty.”

Keeping cheetahs in the wild

When cheetah cubs are rescued from human-wildlife conflicts or illegal trade, the MoERD-CCF team takes them to a safe house, where they receive medical treatment and rehabilitation. But in most cases, it’s not possible for the cubs to be released back into the wild, Marker said.

“These animals have come into captivity when they are the size of the palm of your hand,” she said. “They know nothing but humans. So an animal like that … [we] can’t really put it back in the wild because it’s going to want to be around people. And learning how to hunt is something that a mother teaches them to do … they live with their moms until they’re about 18 to 22 months of age.”

The average cost of caring for a cub is about $5,000 per year, Susan Yannetti, a senior advisor at CCF, told Mongabay. In the wild, cheetahs only live for about 8 years, but they can live much longer in captivity when they receive quality care, she said.

While the MoERD-CCF team is dedicated to the long-term care of rescued cheetahs, this in itself won’t stop human-wildlife conflicts or illegal trade. But education might, Marker said. A key step is informing Somaliland people that killing, capturing or trading cheetahs is illegal.

“They don’t know that it is illegal, and so those educational processes are going to be slow,” Marker said. One of the biggest hurdles is reaching nomadic people who are “not in any place at any one point in time for long,” she said.

The team is also developing an education program to help farmers in Somaliland learn how to manage their livestock in a way that minimizes cheetah conflicts.

“You wake up in the morning and you let your animals out and they go two hours away,” Markers said. “If that was your bank account, would you go with your animals, or would you hope that somebody wasn’t going to rob your bank? It’s a simple question … but quite often, they don’t think about that.”

Marker, who is a livestock farmer herself in Namibia, said it’s also important to teach farmers how to monitor the health of their animals to minimize deaths due to disease and other issues.

What the CCF team ultimately wants is for people and cheetahs to coexist peacefully on the landscape, which will promote a healthier level of biodiversity in a place already challenged by climate change.

“They’re fast, they’re gorgeous, they play such a key role in the ecosystem,” Marker said. “The idea is not to have them in the sanctuary — it’s to maintain them in the wild.”