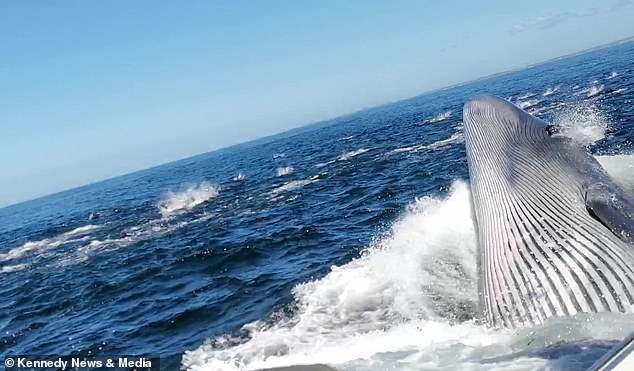 A whale hunting for food off the coast of South Africa almost bit off more than it could chew after knocking a hapless father off a sightseeing boat and very nearly swallowing him.

Marino Gherbavaz, 51, was taking part in a whale-watching tour with 22-year-old daughter Gillian and the rest of his family in Algoa Bay when the dramatic scene unfolded on April 3.

Gillian said they were watching a pod of dolphins herd sardines into a bait ball when a whale came up from the depths to take a mouthful of fish and struck the boat.

At first, Gillian thought they had hit a rock but as she looked around she saw the whale breech the water.

But amid the commotion she had failed to see her father being thrown overboard and it took a few more moments to realise that he was in the water.

Luckily another boat was in the area and was able to pull up alongside and help Marino out of the water before the whale returned.

Whales typically feed on small marine life such as sardines and plankton and do not hunt larger animals such as people.

But they have been known to accidentally swallow larger creatures such as birds while taking part in hunts.

Gillian, from Gqeberha, South Africa, said: ‘When I realised it was my dad in the water, I panicked. I could not understand why he was in the ocean.

‘He is not normally the type to make a spectacle, so I was very confused. Once I knew he was okay and could swim to the boat on his own I relaxed.

‘The whale and dolphins had moved on so I couldn’t see any immediate danger.

‘When he got back in the boat, I went to him and said “what did you do that for?” and we both laughed so I knew he was okay.

Recalling the events leading up to her dad going overboard, she said: ‘A massive pod of common dolphins were rounding up the fish into a bait ball and the fish tried to use the boat for cover and that’s when the whale went in for a lunge and hit us.

‘I honestly thought we had hit a rock until I saw the breech. It felt like the boat had stalled the way a car would and there was a loud bang.

‘There was another rubber dinghy at the site and they came to help my dad out. It was really quick, and he was back in the boat before I had a real chance to worry.

‘I was relieved to see him laugh at what had happened and we quickly started discussing how he had ended up in the water. My mum took a bit longer to realize he was okay.

‘We had made it around all three of the islands in the bay and were about to head home when the charter received information about the sardines and that whales had been sighted so the crew took us out to see them.

‘We had been out since about 8am and got to the site where the whale was around 11:30 and shortly after the whale hit the boat in the middle of the feeding frenzy.

‘My whole family were on the boat, as well as my aunt and uncle. We did a similar trip in December and loved it so much we decided to go again. We will probably go many more times in the future.’

Raggy Charters, which organised Gillian’s trip, has been running in South Africa since 1992 and is the oldest Marine Eco Tour company combined with a conservation project in the country.

Owner Lloyd Edwards said: ‘Luckily the whale didn’t hit us in the middle, otherwise the boat would have been in real trouble. It was a glancing blow to the side.

‘The whale was keen to get to the sardines which had been herded into a bait ball by the common dolphins chasing it up the coast.

‘It still left a hole in the boat but we have fixed that already and we filed a report with the coast guard immediately. We have a 100% safety record.’

This article was first published by The Mail Online on 13 April 2021. Lead Image: Gillian Gherbavaz, 22, was filming dolphins eating sardines off the coast of South African when a whale suddenly surfaced to take a mouthful of fish and hit the boat she was on.