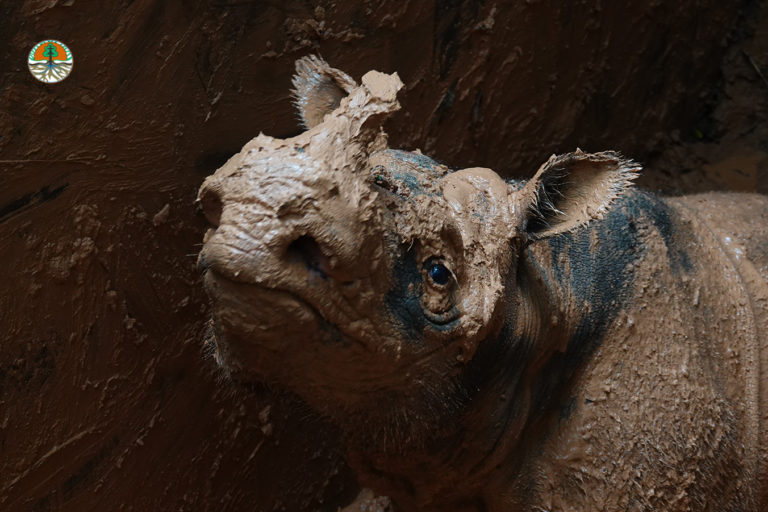 EAST LAMPUNG, Indonesia — Indonesian authorities will make their first attempt at in vitro fertilization of a Sumatran rhino, aiming to boost the critically endangered species’ gene pool in the process.

The egg for the IVF attempt will come from Pahu, a solitary female Sumatran rhino (Dicerorhinus sumatrensis) being held at the Kelian Lestari Sumatran Rhino Sanctuary (SRS) in West Kutai district, in the Bornean province of East Kalimantan. Indra Exploitasia, the director of biodiversity conservation at the environment ministry, told Mongabay that the plan was to fertilize egg cells harvested from Pahu with sperm collected from one of the males living at the Way Kambas SRS in Lampung province, on the island of Sumatra.

Pahu was captured from the wild in November 2018 as part of a captive-breeding program for the species. For a year she has been held alone in the facility leading some to question what Indonesian authorities plan for her future.

Pahu is believed to be quite old as rhinos go, about 25 years old, but experts say they’ve found no obvious reproductive problems with her.

However, she weighs only around 360 kilograms (790 pounds), less than half the weight of a typical adult Sumatran rhino, and experts suspect she might be suffering from dwarfism. And because Sumatran rhino mating is rough and at times violent, Pahu’s small size has raised fears that she could be injured, or even killed, if conservationists attempt to mate her naturally with a much-larger male. Her small stature has also prompted doubts that she would be able to bring a regular-sized baby to term.

Pahu’s isolation at the Kelian Lestari SRS is another potential obstacle. Previous research has indicated that female Sumatran rhinos do not ovulate naturally when males are not present. However, Dedi Candra, a veterinarian working for Indonesia’s environment ministry, says some egg cells do develop without males present, albeit at a slower pace, and that researchers have had some success artificially inducing ovulation. Widodo Ramono, executive director of the Indonesia Rhino Foundation (YABI), says that male rhino urine alone may be enough to stimulate ovulation. Conservationists in Indonesia have already made use urine from captive males, flying a liter to Kalimantan to help lure Pahu into the pit trap where she was captured.

“We are currently monitoring Pahu’s reproductive health,” Indra told reporters in Way Kambas on Oct. 30. “We must know first when she ovulates, so the egg cells can be retrieved and then fertilized in a test tube.”

If the plan goes through, it will be the first IVF attempt on captive Sumatran rhinos by Indonesia, says Widodo. Scientists here previously attempted artificial insemination — injecting sperm into the uterine cavity —with Bina, one of the captive female rhinos at Way Kambas, but it was unsuccessful. For that attempt, they used semen collected from Andalas, a rhino born in captivity at Cincinnati Zoo and now a resident at Way Kambas, where he has sired two offspring, both through natural mating.

Last month, experts in Malaysia attempted to use IVF to fertilize an egg harvested from an older female rhino using sperm collected from a now-deceased male. But that attempt was also unsuccessful, with Malaysian experts citing the low quality of the sperm, taken when the male was very old. The Malaysian conservationists have long requested a transfer of sperm from the Indonesian captive rhinos, but Indonesian authorities have repeatedly declined, citing the need to sort out along list of paperwork.

If the IVF attempt with Pahu’s egg and sperm from Andalas or his younger brother, Harapan, is successful — or Malaysia sends egg cells retrieved from its last rhino to Indonesia and the treatment works— the new offspring would represent a new hope for the species. The populations in Sumatra, D. s. sumatrensis, and Borneo, D. s. harrissoni, are subspecies that have been genetically separated for hundreds of thousands of years. Mixing the two would give a much-needed boost to the gene pool of a species so diminished —as few as 40 are believed to remain on Earth — that inbreeding is a real risk.

The idea of mixing the Sumatran and Bornean bloodlines initially met with disapproval from conservationists. But in recent years there’s been a growing sense of urgency among researchers that the situation is so dire that it’s better to focus on preserving the species at all costs rather than trying to maintain two separate subspecies.

Indra said the planned IVF attempt would most likely use sperm from Andalas, who is a proven breeder. “Harapan has never had a chance to mate naturally,” Indra said. “So we don’t know yet the quality of his sperm, and we haven’t tried to collect samples from him.”

Meanwhile, the surrogate mother could be any captive female Sumatran rhino as long as she’s not going under a natural breeding program, Indra added.

A previous global effort to breed captive Sumatran rhinos, launched in the 1980s, fell through a decade later after more than half of the animals died without any calves being produced. But a string of successful captive births at Cincinnati Zoo, and later Way Kambas, and a growing consensus that the species will go extinct without intervention, have laid the groundwork for the latest captive-breeding effort.

The species was brought to the edge of extinction by habitat loss, with Sumatra and Borneo losing vast swaths of forest to oil palm plantations and coal mines, as well as poaching. Now, conservationists believe a low birthrate is the primary threat to Sumatran rhinos’ survival. The network of SRS breeding centers (the Indonesian government plans to open a third in Aceh, at the northern tip of Sumatra) holds a combined eight rhinos — seven at Way Kambas and one at Kelian Lestari, including two calves born in captivity. Malaysia has one in captivity, an aging and ailing female named Iman, but otherwise the species is believed to be functionally extinct there.

This article by Basten Gokkon was first published on Mongabay.com on 5 November 2019.