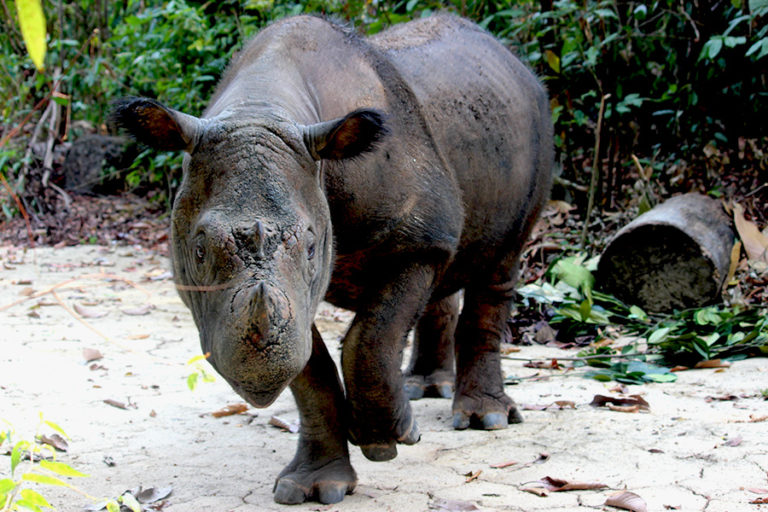 EAST LAMPUNG, Indonesia — Officials in Indonesia say they hope to capture three Sumatran rhinos from the wild for a recently expanded sanctuary where experts are carrying out breeding attempts to save the species from extinction.

While waiting for new rhinos to occupy the extension sometime next year, officials at the SRS have already moved one of the seven existing Sumatran rhinos (Dicerorhinus sumatrensis) at the facility into the new paddocks; Harapan, a 12-year-old male, is himself the product of an earlier successful captive-breeding program carried out at Cincinnati Zoo in the U.S.

The SRS at Way Kambas was opened in 1996, covering 100 ha (247 acres) and envisioned as a way to provide a heavily protected semi-wild habitat in which captive rhinos could breed naturally. Experts at the sanctuary are also tasked with carrying out research and programs to maintain a viable captive population that should be able to be released back into the wild eventually.

“Way Kambas National Park, where some of Sumatra’s last lowland tropical forest exists, is the last frontier for nearly extinct wildlife, such as the Sumatran rhino, [so] that we must protect its sustainability,” said Indra Exploitasia, the director of biodiversity conservation at Indonesia’s environment ministry.

Indonesia has launched a program to track and tally up Sumatran rhinos in the wild, including in Way Kambas National Park outside the SRS. Ade said five teams had been deployed to look for wild rhinos in Way Kambas and, by February, to start setting up pit traps to safely capture them alive.

The park agency estimates the rhino population in Way Kambas, which spans some 130,000 ha (321,200 acres), at some 33 individuals; some analyses give a much lower figure ofaround a dozen. The sanctuary itself is home to seven captive rhinos: three males and four females. Two of the rhinos were conceived and born at the sanctuary.

“We need new males and females to be relocated into the SRS. The reason is clear: to avoid inbreeding,” said Subakir, the head of Way Kambas National Park Agency.

In tandem with efforts to breed the species in captivity, conservationists are calling on the government to protect the last remaining wild habitats of the critically endangered animal so that there’s somewhere to release them back into when the situation allows.

The government of Lampung province has promised to increase protection for its forests from human pressure, especially within national parks, saying it wants the province to be the stronghold for the species.

“We must protect the Sumatran rhino, Indonesia’s treasure, from extinction,” said Arinal Djunaidi, the governor of Lampung, at a ceremony to mark the opening of the SRS extension on Oct. 30. He said he would seek an agreement with the environment ministry to boost law enforcement for national parks across Lampung.

Unlike with other rhino species, poaching isn’t the biggest threat to Sumatran rhinos. It’s the lack of natural breeding in the wild — a result of their habitats being carved up and destroyed, isolating individual rhinos and making it less likely that they’ll encounter one another to breed — that poses the greatest danger to the species.

“We’re fighting against extinction,” said Zulfi Arsan, a veterinarian at the SRS. “The population decline rate is [higher] than the birth rate.”

Despite its name, the species used to roam other parts of Asia, including India, Thailand, Vietnam, Cambodia and Malaysia. But the combination of habitat loss and poaching has left Indonesia as the final refuge for these rhinos; Malaysia’s last Sumatran rhino, a female held in captivity,died of ill healthon Nov. 23.

Widodo Ramono, the executive director of YABI,said his foundation had partnered with an international group, the Sumatran Rhino Survival Alliance — which consists of Indonesia’s environment ministry, the IUCN, the International Rhino Foundation, Global Wildlife Conservation, National Geographic and WWF — to protect the species.

“The expansion of the SRS can be used to its best to increase the rhino population while paying attention to sustainability, heritability, and good management of habitat,” he said.

Experts at SRS will still prioritize natural breeding, but are also open to using advanced reproductive technology, including in vitro fertilization.

“We must be very careful in carrying out anything,” Zulfi said. “Obviously, to produce a healthy rhino needs healthy parents who don’t have any reproductive problems.”

Fewer than 80 Sumatran rhinos are believed to live in small populations scattered in the dwindling forests of Sumatra and Indonesian Borneo. In Sumatra, experts believe the rhinos survive in Gunung Leuser National Park, Bukit Barisan Selatan National Park and Way Kambas National Park. In Borneo, no more than 10 individuals are estimated to roam the forests of East Kalimantan province. Last year, a female rhino was captured from the wild there and relocated to a second SRS facility there. In 2016, another female rhino had been caught, but died a few weeks after her capture.

“We must act quickly against time to save this species that has lived on Earth since 20 million years ago,” Widodo said. “The most important effort now is to produce as many rhinos as possible at SRS in the safest setting there is.”

This article by Basten Gokkon was first published on Mongabay.com on 10 December 2019.