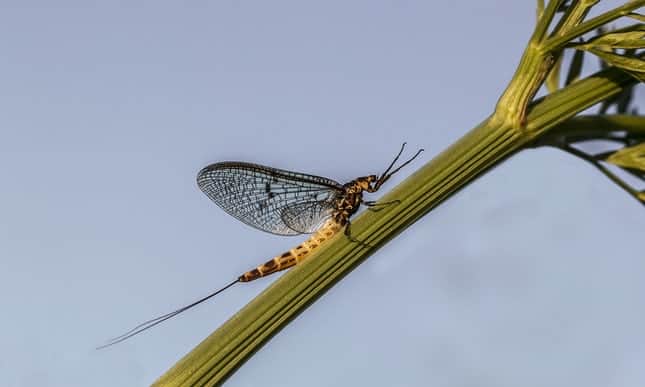 Modest levels of pollution found in many English rivers are having a devastating impact on mayflies, new research suggests, killing about 80% of all eggs.

Clouds of emerging mayflies were once a regular sight on English summer evenings and they are a key part of the food chain that supports fish, birds and mammals. The finding that even pollution well below guidelines can cause serious harm adds to concerns about plummeting insect numbers.

In October, a study found that the abundance of flying insects has plunged by 75% in 25 years, prompting warnings that the world is “on course for ecological Armageddon”, with profound impacts on human society.

Paul Knight, chief executive of Salmon and Trout Conservation (STC), which is conducting an in-depth three-year survey of rivers, said: “The results of this groundbreaking new study are irrefutable. We believe this is just the tip of the iceberg. Lose your invertebrates and other species will follow.”

The new research looked at the blue-winged olive, a common mayfly present across the British Isles and most of continental Europe. Its numbers have fallen significantly in recent decades and it has almost vanished from some English rivers.

The prime suspects for this decline are fine sediment and phosphate pollution in rivers, which are washed off farmed fields and also result from untreated sewage. Some research has been done on how the larval and adult stages of mayflies are affected by pollution, but not on their eggs.

“The young life stages are the most vulnerable, just as with human babies,” said Nick Everall, at the Aquascience Consultancy and who led the research published in the journal Environmental Pollution. Blue-winged olive eggs are laid on river beds and then have to survive for up to eight months over winter before hatching into nymphs.

However, experiments in the laboratory found that the fine sediment settles on the eggs and suffocates them, by preventing oxygen transferring into the egg. The sediment can also allow fungus to grow and kill the eggs, while phosphate is known to affect the development of eggs.

At levels very close to existing guideline limits – 25mg per litre of fine sediment and 0.07 mg/l of phosphate – the researchers found 80% of the eggs died. Most English rivers contain more phosphate than this – only 17% have “good ecological status” under EU rules. High sediment levels are also frequently found, with 40% or rivers having more than 10mg/l – a level the new work shows is harmful to the mayfly eggs – and 10% more than 25mg/l.

“Mayflies such as the blue-winged olive are a crucial component in the aquatic food chain but numbers have declined substantially in many UK rivers over the past 30 years, particularly in chalk streams,” said Everall, whose study was supported by STC.

“Their continuing loss can affect the survival of other important species such as wild fish, bird life and mammals,” he said. “This research shows even modest levels of sediment and phosphate, below current national thresholds, have a significant impact on egg survival.”

Knight said: “Current regulations are simply not rigorous enough to detect the extent of the problem. This latest study supports growing concern about current guidelines.” He said STC was working with local Environment Agency teams to develop more appropriate targets, but that these need to be implemented nationally.

Everall said climate change was unlikely to be a factor in the mayfly declines, as the rise in water temperatures have not been sufficient to date, but he said pesticides could be playing a role. In December, “alarming” test results showed most British rivers are polluted by powerful insecticides called neonicotinoids and in 2013 research in the Netherlands revealed neonicotinoid pollution in water led to sharp drops in insect numbers.

This article was first published by The Guardian on 11 Jan 2018.