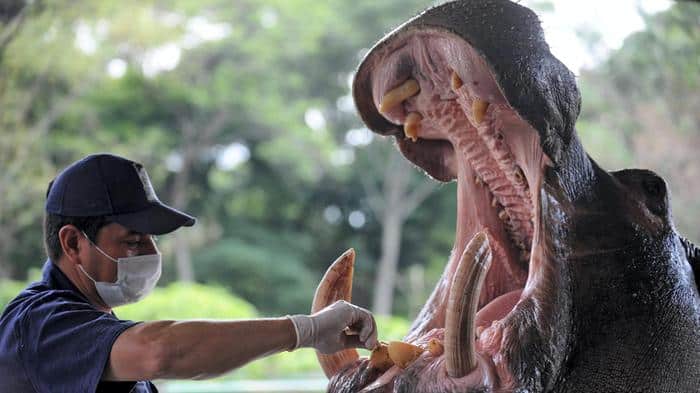 An international trade in hippopotamus teeth and tusks is fast becoming a legal substitute for elephant ivory, a leading conservationist warned.

Azzedine Downes, chief executive of the International Fund for Animal Welfare, said the practice was concerning. Speaking during a visit to Dubai to discuss unlawful online sales of animal products, he said an increase in demand on markets in Asia and Europe was to blame.

He said many hippopotamus teeth, also known as hippo ivory, end up in Hong Kong, where they are turned into intricate ornamental carvings, similar to the ornaments made from elephant ivory.

“It is not only the products being sold, such as hippo teeth, rhino horn, shark fins or pangolin, that are the problem, but the criminal networks behind the sales,” Mr Downes told The National.

“Some of the discussions we’ve had with government authorities in the UAE have been about who is running the networks and how they can be shut down.

“Stopping wildlife cybercrime should not only be about one specific product, as there will be ways to navigate around the law.

“Hippo ivory is a good example as there is no protection for hippo teeth, which is what we know is now being traded.”

Mr Downes was in the country to attend a series of talks with officials on a new wildlife cybercrime initiative for the region, which is due to be introduced next year.

The plan seeks to improve how evidence is gathered, prosecution rates and government relationships with social media companies, whose platforms are sometimes used to trade contraband.

Last year, a report by security analysts C4ADS identified Dubai International Airport as a hub for wildlife traffickers passing from Africa into Asia.

There is no blanket international ban on trading hippo ivory, with only a few countries designating the practice illegal.

The Ifaw would like to see more nations introduce legislation to prohibit trade, while a ban on the trade of elephant ivory in the UK is expected to be extended to include hippo ivory this year.

The Convention on International Trade in Endangered Species of Wild Fauna and Flora said about 60 tonnes of hippo teeth was imported into Hong Kong between 2004 and 2014. Almost half of that came from Uganda, where authorities were concerned about the dwindling population of wild hippos.

The trade in hippo ivory was outlawed by Uganda in 2014, but other source countries where it is still legal include Malawi, Zambia and Zimbabwe.

Mr Downes said more needed to be done to protect hippos, which are marked as vulnerable by the World Wildlife Fund.

He also said effective intelligence sharing was the greatest weapon in the fight against unlawful wildlife trafficking, and that the UAE’s ability to track and prevent illegal smuggling continued to improve.

“Most governments are becoming more aware of these problems. There are impressive security measures in place by the UAE government, so they have the ability to track these transactions, if there is the political will to do so.

“The new cybercrime project will look further at websites to disrupt networks by detecting patterns of behaviour at the source of the poaching that may indicate criminal activity.

This can only be successful with the sharing of information.”

Hippo ivory, which closely resembles that of an elephant, is generally cheaper than elephant ivory due to its limited international trading ban.

Since 2014, the price of ivory has fallen by about 70 per cent, according to research conducted in China.

Hippo ivory carvings can command a price of between $50 to $500, depending on their size.

Dr Elsayed Mohamed, Ifaw’s regional director for the Mena region, said that a proposal on how best to combat international wildlife cybercrime was due to be discussed at a Cites conference in Geneva next month.

“The proposal suggests appointing national points of contact for online investigations, evidence gathering and prosecutions to develop relationships with tech companies,” he said.

“Ongoing national monitoring programmes and relevant experts should be established to develop an appendix of illegal specimens most ­commonly found for sale online.”

This article was first published by The National on 14 July 2019.