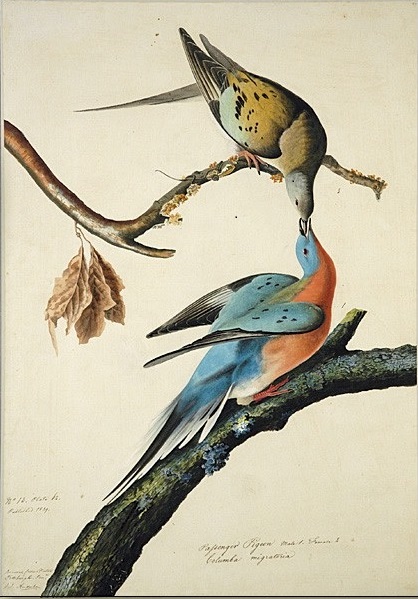 John James Audubon “was struck with amazement” at the darkened skies caused by the birds. The man who would become famous as an artist of nature was, not surprisingly, himself a naturalist. Yet his efforts to document the flock’s numbers were futile.

“The birds poured in in countless multitudes,” Audubon would write. “The air was literally filled with pigeons; the light of noonday was obscured as by an eclipse; the dung fell in spots, not unlike melting flakes of snow; and the continued buzz of wings had a tendency to lull my senses to repose.”

Rarely has abundant poop led to serenity, but in 1813 Audubon was witnessing the spectacle of what was then the most abundant bird on earth: the passenger pigeon. Billions moved across our boundless eastern deciduous forests, feeding on the ample store, or “mast,” of nuts from acorns, beechnuts, chestnuts, and the like. By the end of that century, the passenger pigeon was all but extinct.

It is probably the most dramatic extinction story ever witnessed. Yet now there is interest and even the possibility of bringing the most famously extinct bird back. By retrieving DNA from museum skins and using emerging genetic techniques with the passenger pigeon’s closet living relative, the band-tailed pigeon, we might well witness again the passenger pigeon.

Great, right? I am not so sure. Of course I wish I had had a chance to see the magnificent dark clouds of birds that Audubon saw. But the passenger pigeon is gone because the world that it belonged to is no more. The ecological challenges I grapple with daily as a conservationist today give me pause as I consider the idea of bringing back long-lost species and returning them to the wild.

We are in a world of hurt in conservation. Many species are at risk of extinction and the problems and challenges only grow. Particularly dispiriting is the fact that financial support for species conservation is waning even as the threats to so many species grow.

Genetically re-engineering passenger pigeons (or wooly mammoths, or tyrannosaurs) sends a misleading message: Extinction is not forever! We can bring anything back. How will public perception of wildlife and conservation change with the re-emergence of extinct species? We will never truly lose a species, the argument goes, as long as we have the DNA.

Another concern: I do enjoy seeing animals in zoos, particularly those I haven’t seen in the wild.

The organization I work for, the Wildlife Conservation Society, maintains its headquarters at the Bronx Zoo. On a recent visit there, I greatly enjoyed visiting our “World of Birds” exhibit. There I can see the grey-winged trumpeter up close. Trumpeters are highly social, large terrestrial birds of northern Amazonia. Through the zoo I can get a sense of the bird and take inspiration from how this “piece” (this species) fits in the “whole” (its Amazon habitat).

Here’s my point. Recreating the passenger pigeon recreates a “piece,” but their “whole” is long lost. The world of the passenger pigeon was the immense, intact, and uncut forest landscape of eastern North America that no longer exists. More specifically gone is the massive mast of food produced by this forest that this highly social and mobile animal thrived upon at particular points in time and space.

The billions of birds would darken skies in search of this mast and rear their single young from nests. Then they would move and find more masts and breed again. Breeding twice across large geographies with large food stores was key to their survival. That world is gone, gone. Gone is the American chestnut, the beautiful American Elm. Gone is that “whole.”

Natural history museums can capture our imagination by preserving the memory of species long gone. Zoos have the power to inspire visitors to conserve species yet with us. We risk blurring those distinctions by bringing back the passenger pigeon and other extinct species. In many cases these animals would return to a new “wild” challenged by our growing human footprint.

Like Audubon, I am struck with amazement at what was the world of the passenger pigeon. As we consider the pros and cons of de-extinction, let’s learn from that lost world and engage more fully with our own to keep the species and habitats we do have left from disappearing. The better we appreciate what we have lost, the more we may cherish what remains.

Better the passenger Pigeon than the Woolly Mammoth!!

The passenger pigeon didn't go extinct because it lost it's habitat. It went extinct from market hunting. We stopped market hunting. If we can bring it back we should. We have gone through very intense efforts to bring back Whooping Cranes. I can't see that as a mistake. Same with condors. There's not a finite pot of money that we can prioritize using science. Projects are funded based on interest, feasibility and need. If this were a privately funded effort and the money didn't come at the expense of another species where's the harm? I'm not worried that people with… Read more »

There are still many species that fall into the pest category which many people (governments)continue to slaughter. Its already assumed that the pests will come back. These people want to believe that certain species will never return.

Absolutely right! We should put all our efforts into conserving those hundreds (thousands?) of species currently at threat of extinction because of our activities rather than worry about bringing back things already gone. Worse, if somebody DID succeed in producing some genetically similar bird, it might make people think that it really doesn't matter if more species go extinct as we can always bring them back at some time in an imaginary future!

I say do it first. Prove your fear. Only then try to talk everyone out of it. The dodo may make a great zoo attraction.

Definitely food for thought! It does seem rather pointless to spend time, money and effort on retrieving a species back to a hostile environment. Better to concentrate on saving the environment and preventing extinction of viable species.