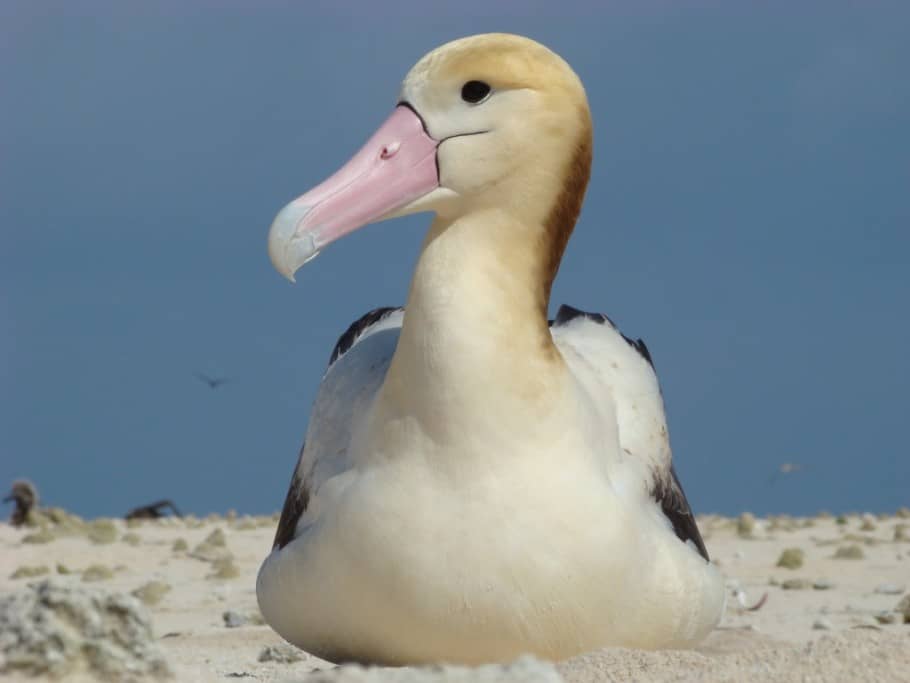 Maybe ten rare Short-tailed Albatrosses showing up at several Hawaiian Islands doesn’t count as a new population, but those sightings are still causing a buzz in the conservation and birding worlds.

“This is a bird that was once thought extinct and even now inhabits only a very small geographic area in Japan. The fact that it is now showing up in Hawai‘i in double-digit numbers around breeding season is huge news and potentially a major development in the efforts to protect this species from extinction,” said Dr. George Wallace, Vice President for Oceans and Islands at American Bird Conservancy, the nation’s leading bird conservation organization. Wallace said that three birds have been seen on Kure Atoll, five on Midway Island, one on Laysan Island, and one on Tern Island.

The Short-tailed Albatross was once the most abundant of the North Pacific albatross species, numbering more than a million birds. It was decimated by feather hunting at the turn of the 20th Century, and by the late 1940s was thought to be extinct. In the early 1950s, ten pairs were discovered breeding on the island of Torishima, Japan. The population has now reached 3,000 individuals, with most still on Torishima, but conservationists fear an eruption of the active volcano there could spell disaster. For the last five years, the Short-tailed Albatross Recovery Team, an international group of collaborators, has been working on establishing a new colony on Mukojima Island, also in Japan, which is safe from volcanic activity.

The uptick in U.S. sightings conincides with two successful Short-tailed Albatross breeding efforts, one in 2011 and one in 2012, both by the same pair of birds on Midway . These are the only known successful breeding attempts of the species in the US. Midway is located more than 1,300 miles northwest of Honolulu, and consists of a circular barrier reef and several sand islets managed as Midway Atoll National Wildlife Refuge. It is home to the world’s largest colonies of Laysan and Black-footed Albatrosses, as well as millions of other seabirds.

The State of Hawai‘i and the Kure Atoll Conservancy have been engaged in an active campaign to rid the island of the invasive weed golden crownbeard so that it offers higher quality habitat for nesting seabirds. The weed overwhelms albatross nesting areas and grows so quickly that it can even prevent albatross chicks from fledging. Both Midway and Kure are part of the Papahānaumokuākea Marine National Monument, designated by President George W. Bush in 2006.

“I don’t think these recent sightings and the two successful Short-tailed Albatross breeding efforts at Midway Atoll are a coincidence. They certainly give us more reason to believe that we are seeing the early stages of the formation, in perhaps 50 years, of a new population of this very rare bird,” Wallace said.

Outside the breeding season, the Short-tailed Albatross ranges along the coasts of eastern Russia, Korea, China, Taiwan, the Aleutian and Hawaiian Islands, and rarely off the Pacific Coast of North America south to California.