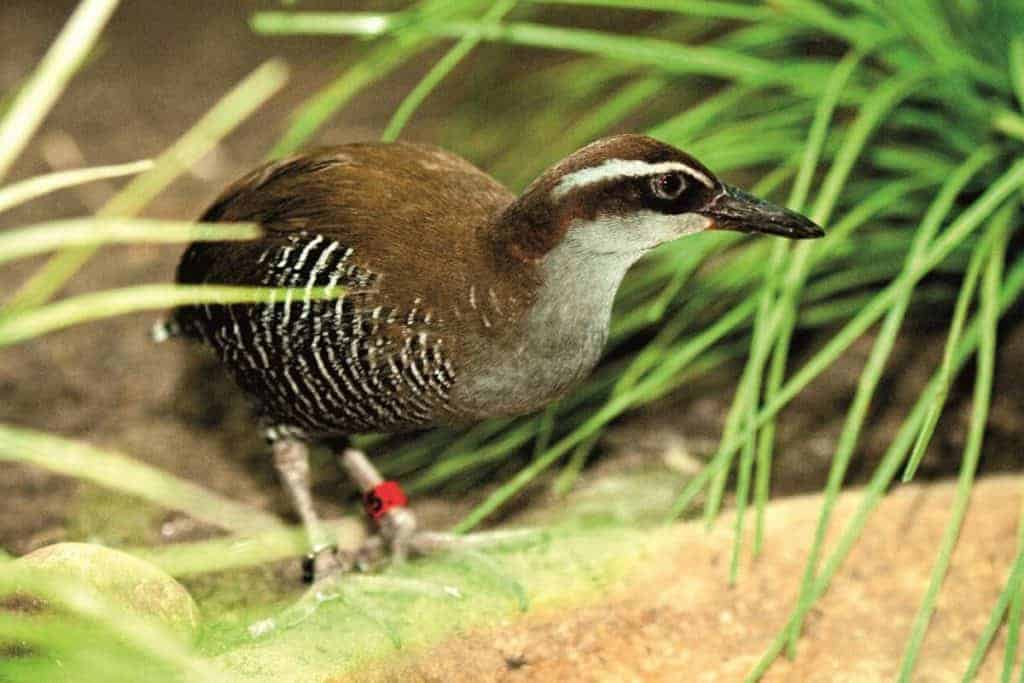 It suffered deadly declines due to an environmental blunder by the military, then was rescued from the jaws of extinction by conservationists. This year it endured the threat of a missile strike, but what does the future hold for the Guam Rail?

Earlier this year, the world held its breath as North Korea’s crosshairs were aimed towards the tiny island of Guam,an overseas territory of the USA in the Western Pacific. International media hastily referred to Guam as a strategically important US military base, but this volcanic coral island is of course also home to 184,000 Guamanians (US citizens, including native Chamorro people of Austronesian descent); a bustling tourism hotspot (particularly for Asian tourists); as well as habitat for a whole legion of animals and plants. Except for the Guam Rail Hypotaenidia owstoni, that is…

A short while after the US reclaimed Guam from the Japanese near the end of World War II, a US military cargo ship carried a deadly stowaway to the island, in what was to become one of the worst cases of invasive species impacts ever. The invader, brown tree snake Boiga irregularis, found itself introduced to a bounty of unsuspecting prey, including the Guam Rail: a previously common, flightless bird with a narrow body — adept at running silently through Guam’s dense vegetation, but not at avoiding snake attacks.

The brown tree snake’s predatory abilities and lack of natural enemies on Guam have since resulted in the disappearance of several bird species from the island, including five species found nowhere else (three of which are now considered extinct, such as the Guam Flycatcher Myiagra freycineti in 1983; and two listed as extinct in the wild: Guam Kingfisher Todiramphus cinnamomius, and the Guam Rail).

The snake has increased on the island so much that Guamanians were once subject to “brown outs” — power outages caused by the small, nocturnal reptile on electricity lines; and the island’s forests are now full of spider webs, the snake having eaten most of the spiders’ native predators.

Luckily in 1987, with the Guam Rail reeling, 21 birds were clutched from the jaws of extinction and taken into captivity, earning the species its current classification of Extinct in the Wild.

Extinct in the Wild anymore?

Thanks to captive breeding facilities on Guam, coordinated by the Guam Department of Agriculture, and in US mainland zoos, those 21 Guam Rails have re-populated an entire species. Between 2010 and 2012, 26 were released after a rat eradication onto Cocos, a tiny island (and resort) just off the southern tip of Guam. With snakes not present, Guam Rails are still sighted throughout the island, but the total number is currently not known due to the birds’ elusiveness.

On Rota (part of the Mariana Islands, also to USA, north of Guam), Guam Rails have also been steadily introduced since the 1990s, involving at times as many as 100 birds per year. This month, 49 more birds were released with the aim of creating new strongholds in parts of Rota.

“The amount of continued effort required to manage and sustain the species on Rota, however, means that the population there may not be considered a fully self-sustaining wild population yet”, says Dr James Westrip, BirdLife Red List Team. That said, very recent reports from Suzanne Medina, Guam Department of Agriculture, tantalisingly hint that the rails could be beginning to flourish on their own.

“We’re now looking at areas on Guam itself for a re-introduction,” says Medina. “And we’re also hoping to get sihek [Guam Kingfisher] out of cages and back into the wild in the next few years.”

In times of violent rhetoric, investment in weaponry, and even worry of nuclear war, it’s heartening to know that there are people out there (even in the potential firing line) doing a bit of good for the planet.For a species like the Guam Rail, almost extinct due to a military blunder, it’s a whole world of good, and a positive message for us all.

Guam Rail, ko’ko’, filmed in the “wild” on Rota Island after reintroduct

This article was first published by BirdLife International on 29 Nov 2017.