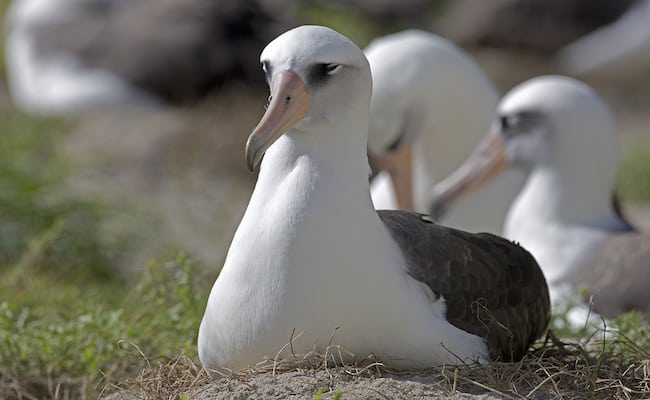 Wisdom, a Laysan albatross, has once again returned to Midway Atoll National Wildlife Refuge and Battle of Midway National Memorial and has laid an egg. The approximately 67-year-old flies thousands of miles every year before returning to the Midway Atoll.

Although these graceful birds nest on tropical Pacific islands, they can travel as far as Japan, the Aleutian Islands or California to find food.

U.S. Fish and Wildlife Service (USFWS) refuge staff recognized Wisdom, the world’s oldest known breeding bird, along with her mate Akeakamai, in late November; On Dec. 13 they spotted Akeakamai sitting on a nest, incubating an egg.

Midway Atoll is part of the Papahanaumokuakea Marine National Monument, located at the far northern end of the Hawaiian archipelago.

One of the oldest atoll formations in the world, it provides grounds for more than three million seabirds to nest and raise their young, including 70 percent of the world’s Laysan albatross population. According to the USFWS, it is also home to nearly 40 percent of Black-footed albatross, as well as Short-tailed albatross and at least 20 other species of seabirds.

But Wisdom is special.

In 1956 Chandler Robbins bandedWisdom, whom he guessed was about six years old. Little did he know that 61 years later, that albatross, now known as the oldest seabird in the world, would be expecting another baby. She’s been coming back to the same nest every year. Over the course of these years, it’s estimated that she’s logged an incredible six million miles of flight time.

The average lifespan of her species, the Layman albatross, is between 12 and 40 years, so it’s amazing that she’s still alive and even more impressive that she is still breeding.

These birds are equally responsible for raising their young and they form long-term partnerships. They lay only one egg per year, so each one is special to their parents. According to the USFWS, Wisdom and her partner have raised at least eight chicks since 2006 and she has raised as many as 40 during her long life.

This year the USFW reports that Wisdom’s mate Akeakamai took the first shift on the nest while Wisdom went to look for food.

She may be gone for as long as a month, so he just has to go hungry while he waits for her return. When that happens, they will swap places. And after the egg hatches, the two parents will share equally in the rearing and feeding of their chick.

We can all watch and marvel at the spectacle of a senior citizen who is still bringing new life into the world.Nature is truly amazing!

For updates on Wisdom and her family, you can check out the USFWS – Pacific Region on Flickr.