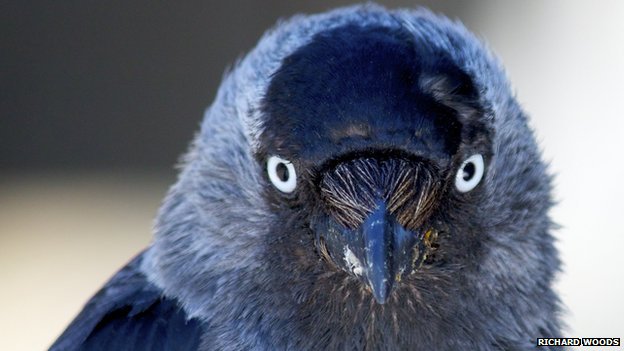 Researchers from the University of Cambridge, UK, tested whether the dark birds’ striking blue-white eyes help them to protect nest sites. They found that jackdaws avoided nest boxes when they could see the eyes of a jackdaw inside. Experts suggest this is the first evidence that bright eyes could act as signals in the bird world.

The results were published in the Royal Society journal Biology Letters. Jackdaws are members of the corvid family, which includes birds such as crows, ravens and jays, and are known for their intelligence.

The pale blue-white irises of jackdaws’ eyes contrast with the dark feathers covering them from head to tail. And unlike most other corvids, jackdaws nest in cavities which are a limited resource, so competition for nest sites can be intense.

Gabrielle Davidson undertook the study of over 100 jackdaw nest boxes erected around the village of Madingley as part of the Cambridge Jackdaw Project.  “I’ve seen these eyes look so dark from within the dark cavities and when they have conflicts at the nest box I’ve seen them display these eyes,” said Ms Davidson, explaining what had inspired her work.

To understand how the birds reacted to each other’s eyes, she set up an experiment to display one of four circular images the size of a jackdaw’s head at the entrance hole of each nest box.

Ms Davidson found that when the jackdaws investigating the nest boxes encountered a picture of a jackdaw with bright eyes, they approached the entrance less and were less likely to perch outside the box.

The phenomenon of birds using their eyes as a type of signal has been little studied because it is a relatively rare occurrence. According to Ms Davidson, only 10% of perching birds have brightly coloured eyes rather than brown or black.

“We really don’t know why some species have say yellow or blue eyes and others don’t. There’s lots more to be explored about why they might have evolved these brightly coloured eyes,” she said.

This article was written by Ella Davies for BBC Nature News.