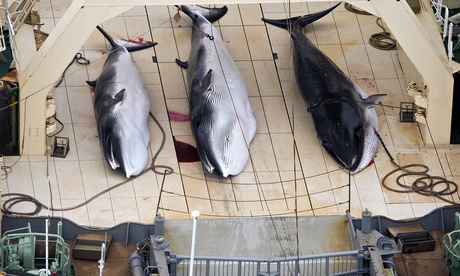 Japan has killed 30 minke whales off its north-east coast, in the first hunt since the UN’s top court ordered Tokyo to stop killing the animals in the Antarctic, the government said. The Japanese whaling fleet that left the north-eastern fishing town of Ayukawa in April completed its mission last week, the country’s fisheries agency said. It was the first campaign since the international court of justice (ICJ) ruled in March that Japan’s annual expedition to the Southern Ocean was a commercial activity masquerading as research.

The non-Antarctic hunt, which takes place in spring and autumn in coastal waters and in the north-western Pacific, is also classified as “research” by Japan, but was not an issue in the ICJ case, which only addressed whaling in the Southern Ocean.

Whalers killed 16 male and 14 female mammals, with an average length of about six metres (20ft), the agency said.

Japan has used a loophole in a 1986 global moratorium that allows lethal research on the mammals, but has made no secret of the fact that their meat ends up in restaurants and fish markets.

Tokyo called off the 2014-15 Antarctic hunt, and said it would redesign the whaling mission in an effort to make it more scientific.

The Japanese prime minister, Shinzo Abe, angered anti-whaling groups and countries this month when he told parliament he would boost his efforts towards restarting commercial whaling.

Anti-whaling activists and countries, including Australia and New Zealand, had hoped Tokyo would use the cover afforded by the ICJ ruling to extricate itself from a hardened position that hunting whales is an integral part of Japanese culture and must be defended.

Critics say while whale meat was once an important source of protein, few Japanese people now eat it, despite government subsidies.

But a recent poll by a leading national newspaper found a majority of those questioned supported Japan’s right to hunt the mammals.

Observers say the tactics of anti-hunt groups such as Sea Shepherd, whose boats have harassed whalersin the Southern Ocean, have galvanised support among the Japanese public. Demands for an end to whaling are sometimes painted as cultural imperialism in Japan.

I pray the Japanese Prime Minister gets eaten by a whale, or anything else. In the meantime, I will do my little part to try and get the word out to sub other products in lieu of those from Japan.

Stop killing these beautiful animals, it is too cruel, to THEM and US, They are crucial to the oceans, the world will be stuffed without them