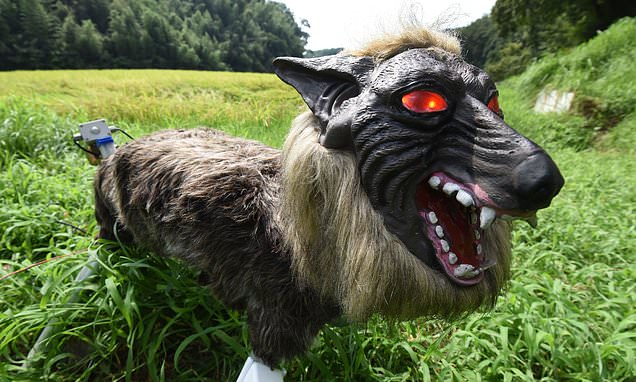 A Japanese town has deployed robot wolves in an effort to scare away bears that have become an increasingly dangerous nuisance in the countryside.

The town of Takikawa, on the northern island of Hokkaido, purchased and installed two Monster Wolf robots after bears were found roaming neighbourhoods in September. City officials said there had been no bear encounters since.

Bear sightings in Japan are at a five-year high and occur mostly in rural areas in western and northern Japan, the national broadcaster NHK has reported.

There have been dozens of attacks so far in 2020, two of them fatal, prompting the government to convene an emergency meeting last month to address the threat.

The Monster Wolf has four legs, a shaggy body, blond mane and red, glowing eyes. When its motion detectors are activated, it moves its head, flashes lights and emits sounds ranging from wolfish howling to machinery noises. The maker, Ohta Seiki, has sold about 70 units since 2018.

The real Japanese wolf roamed the central and northern islands of the country before being hunted to extinction more than a century ago.

Takikawa city officials said bears become more active and dangerous as they search for food before going into hibernation in late November.

A decrease of acorns and nuts in the wild this year may have driven the animals to venture closer to towns in search of sustenance, according to local media.

This article was first published by The Guardian on 11 November 2020.