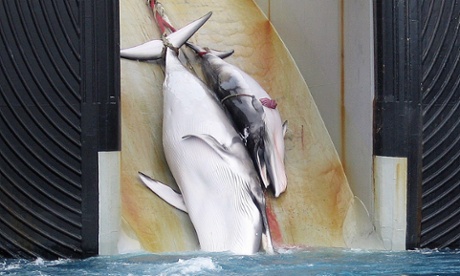 In 1994, member governments of the International Whaling Commission (IWC), the whaling regulatory body, agreed to create a vast sanctuary in the Southern Ocean. There, commercial whaling would be barred so whales hunted nearly to extinction could replenish their numbers in the cold, nutrient-rich waters and thrive again. The Southern Ocean Whale Sanctuary was designed to serve as a safe haven for these marine mammals in their summer feeding grounds.

But one country, Japan, has continued to hunt whales in Antarctic waters. Since the establishment of the sanctuary, Japan’s whaling industry has killed more than 8,000 Antarctic minke whales and other protected whale species in the sanctuary under the guise of scientific research. Despite Japan’s claims, its whaling in the Southern Ocean has produced less science than sushi, feeding Japan’s dwindling appetite for whale meat.

Even if the whaling were for scientific purposes, many scientists agree that the data generated can all be obtained using non-lethal, modern techniques. Almost five months ago, the International Court of Justice (ICJ) ordered Japan to lay down its harpoons, concluding that its scientific output appeared “limited”. This important decision validated the role of international regulations to protect iconic and threatened species.

Japan initially signaled it would abide by the ruling. But shortly thereafter it said that, rather than cease whaling, it would modify the programme to address the court’s concerns and continue whaling in the sanctuary surrounding Antarctica.

On a recent visit to Australia, which sued Japan at the ICJ to stop the whaling, Japan’s prime minister, Shinzo Abe, reiterated that position: whaling in the sanctuary would resume, possibly as soon as next year. Looking at “international law and scientific ground,” he said, Japan “will engage in research of whaling in order to collect the indispensable scientific information.”

But scientists don’t need to kill whales to study them. Commercial and scientific whaling should be practices of a bygone era that saw the near-extinction of many whale species. The toll was such that the IWC imposed a worldwide moratorium on commercial whaling that entered into effect in 1986.

Although Norway and Iceland also continue to hunt whales in contravention of (and objection to) the whaling moratorium, they do so within their own territorial waters. But Japan hunts in the international waters of the Southern Ocean that, taken collectively, represent world’s largest feeding grounds for whales.

The sanctuary should be off limits to whaling – whether “scientific” or not. While the large scale commercial whaling of the 20th century is a thing of the past, with many species recovering, some whales remain endangered and face threats in other parts of their range. If Japan changes its position and accepts the ICJ decision, the entire southern hemisphere will be free of whaling for the first time in centuries.

Even if Japan were to end its whaling programme, today’s world is one with many new human-caused threats to whales and other marine mammals: entanglement in fishing gear; ship strikes; noise from shipping, military and oil and gas industrial activities; and oil spills and other ocean pollutants. Threats also loom from climate change – from potentially changing the abundance and distribution of krill and other essential prey species to the melting of previously ice-locked polar waters that will expose whales to even more human activity.

Solving or mitigating those challenges will take time, resources and the collaboration of governments, scientists, conservation organizations, international agencies, and coastal communities.

Japan has the opportunity to move beyond whaling, and to commit to the conservation of whales and their biologically important habitats. By ceasing whaling and whale meat trade, Japan could bolster the integrity of international agreements and help strengthen their implementation and enforcement. Indeed, the vast majority of the international community, both government and civil society, including many people in Japan, recognizes that there is no place for commercial or scientific whaling in today’s world.

Member governments of the IWC are currently meeting in Slovenia, for the first time since the ICJ decision was handed down. Though it seems unlikely, Japan could come to the meeting and declare that it will fully abide by the decision and cease all whaling in the Southern Ocean – focusing its scientific attention on the full suite of modern threats to whales.

If that does not happen, pro-conservation governments should propose a resolution of the IWC that welcomes the ICJ decision and calls on Japan to comply by ceasing its scientific whaling programme in the Southern Ocean.

Governments and scientists could fully recommit themselves to modern, non-lethal approaches to study whales that benefit communities and society through whale-watching and address the serious environmental threats that remain in our oceans.

Only then will whales truly have a favourable future in the 21st century and beyond.

This article was first published by The Guardian on 15 Sep 2014.

Even if it was for science, what useless scientists need to kill so many of these unique mammals to study them. You are nothing more than LIARS and MURDERERS.