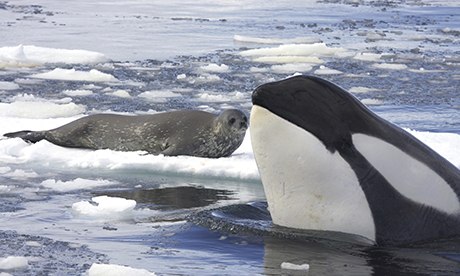 “For thousands of years it was feared as a single-minded, ruthless hunter,” says the narrator of Killer Whales: Beneath the Surface – Natural World (BBC2). Well, it’s hardly surprising. Look at this one. Here’s this poor sea lion, lolling (old meaning) about at the surface of the sea, happily unaware that it’s got half a second to live. It’s like that scene in Jaws, except the sea lion is swimming less purposefully, and isn’t wearing a 1970s bikini. Suddenly, from the dark depths, a huge black and white Exocet missile comes. Bam! One ex-sea lion.

And what about these ones that visitthe beach in Argentina, pluck baby sea lions practically from their playpens, then toss their still-yelping prey about in the air, for fun? Then there are the gangs (yup, that’s the collective noun) prowling around Antarctica, making waves – literal waves – to dislodge seals from their ice floes. Is it really surprising that we’re just a little bit scared of killer whales? There is a clue in the name.

But wait. Because since we started to study these marine assassins in the early 1960s, we’ve learned that they’re highly intelligent, and all sorts of other things, too. They’re learners, and teachers, ingenious and sophisticated; the family, and family values, are very important to them. They’re co-operative, empathetic. They may even be selfless.

And there are different types, distinct species and subspecies that behave in completely different ways. They sound different too, depending on where they’re from, so southern ones speak differently to northern ones, as well as eating different things for tea (or supper, as the southern ones call it).

All of which is absolutely fascinating. But I don’t think any of it makes them any less terrifying, does it? So there’s not just a five-ton killer that can swim at 35 miles an hour down there in the dark, but there’s probably a whole gang of them, working together. They’re cunning as hell, and they may have northern accents.

This article was written by Sam Wollaston for the Guardian.