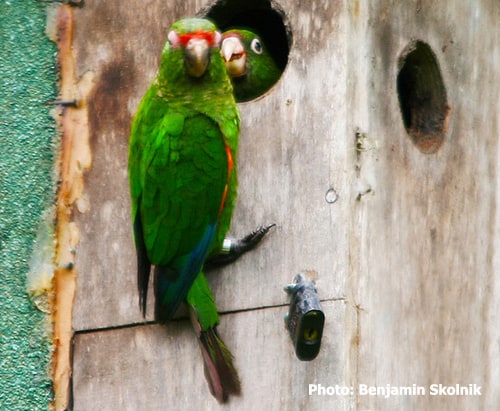 A critical, 318-acre parcel of land in southwestern Ecuador has been acquired as part of the Buenaventura Reserve, and will help protect the globally endangered El Oro Parakeet – a bird that appears to number fewer than 1,000 individuals in the wild.

The new acquisition, called the Dianita property, has become part of the 4,000-acre (1,630-hectare) private reserve that is owned and managed by Fundación Jocotoco, the leading bird conservation organization in Ecuador.The purchase was made possible through the efforts of American Bird Conservancy (ABC), Robert Wilson, World Land Trust, World Land Trust US, and the Danish Ornithological Society. The Reserve protects no fewer than 15 globally threatened species, and is the most important single site for the endemic and Endangered El Oro Parakeet and the Ecuadorian Tapaculo.

There are only about 1000 El Oro Parakeets in the wild, and the reserve is home to about one-fifth of them. Fortunately, those numbers have been steadily increasing as a result of a successful conservation campaign that includes the provision of nest boxes to supplement the scarcity of suitable nest-trees,” says Zoltan Waliczky, Jocotoco’s Executive Director.

The Buenaventura Reserve, in the heart of the El Oro Parakeet’s range in southwestern Ecuador, protects the largest remnant patch of a unique ecosystem that combines elements of tropical wet and dry forests. As little as 5% of this forest, which once spanned northern Peru and parts of the Ecuadorian Coast, may now remain. What is left is threatened by ongoing habitat destruction for agriculture and cattle pasture, making the Reserve vital for the conservation of the rare, endemic birds of the region. The Reserve had been separated into two parts, but these are now connected by the Dianita property, making it an extremely important purchase.

The newly acquired land is 70% cattle pasture, and will need to be restored. Fortunately, Fundación Jocotoco, with help from ABC and other partners have become adept at reforestation of degraded habitat. In the last three years, Jocotoco has planted more than 40,000 trees in Buenaventura Reserve alone, and over 600,000 plants in their network of eight private reserves, thanks to support from World Land Trust and the U. S. Fish & Wildlife Service.

In addition to the El Oro Parakeet and Ecuadorian Tapaculo, the Reserve also protects a stronghold site for the endangered Gray-backed Hawk. This species is typically found only in pairs, but is commonly observed in greater numbers in the Reserve. Other threatened species of interest are the Rufous-headed Chachalaca, Long-wattled Umbrellabird, Red-masked Parakeet, and Pacific Royal Flycatcher. More than 330 species of birds have been recorded at Buenaventura, of which at least 12 are classified as globally threatened; another 34 species are local endemics.

The Reserve also hosts tourists from around the world at the comfortable Umbrellabird Lodge, which is located less than an hour from the airport in Santa Rosa. A well-developed trail system and several bird feeders that attract numerous hummingbirds and songbirds make wildlife observation easy and enjoyable. Buenaventura is part of the Conservation Birding initiative (www.conservationbirding.org), where any funds spent are reinvested into the operational costs of the reserve, assuring long-term conservation of the exquisite plants and animals found there.

The Jocotoco Conservation Foundation was established in 1998 to protect the habitat of globally threatened species of birds in the Andes of Ecuador, together with all associated biodiversity. It also carries out habitat restoration for this purpose, by replanting deforested areas with native trees and shrubs.

This post was written by the American Bird Conservancy (ABC), a 501(c) not-for-profit membership organization whose mission is to conserve native birds and their habitats throughout the Americas. ABC acts by safeguarding the rarest species, conserving and restoring habitats, and reducing threats, while building capacity in the bird conservation movement.