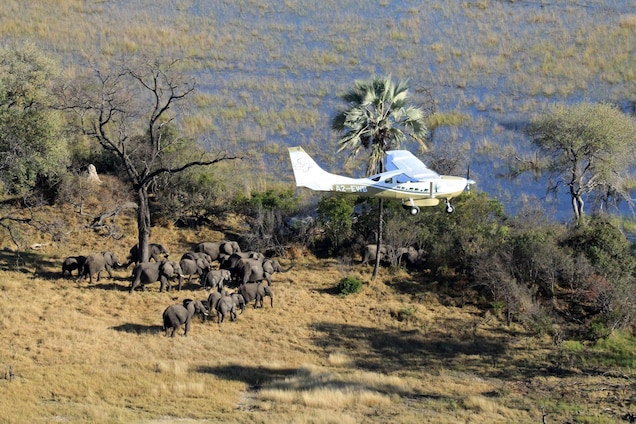 Early findings from the largest ever aerial survey of African wildlife—the Great Elephant Census (GEC)—are proving that big data can make a big difference when it comes to saving the world’s largest land mammal.

The Africa-wide census, funded by Microsoft billionaire Paul G. Allen, took off in February 2014 with the objective of gaining a better understanding of elephant numbers across the continent.

Since then, 90 researchers from various organizations have joined aerial teams flying survey transects in 18 elephant range countries. From the sparkling desert floodplains of the Okavango Delta to the boundless savannas of Chad, the teams have racked up a combined distance of 285,000 miles (460,000 kilometers).

That’s like flying to the moon and a quarter of the way back—or circling the globe eleven and a half times.

“Just in terms of distance flown, this is far and away the largest survey ever done,” said Ted Schmitt, the census’s senior program manager in technology development, over a hotel lunch in the tropical safari town of Arusha, Tanzania.

Schmitt’s a tech guy from Seattle, Washington, not far from Microsoft’s headquarters, and he gets visibly excited when talking about data. He gets even more wound up when it comes to the possibilities of merging the worlds of technology and conservation.

Schmitt and his team of developers—employed under the philanthropic wing of Paul Allen’s Vulcan Inc., in Seattle—built the census’s database, the central storage and analysis point for all data supplied by the survey teams.

“This amount of raw survey data has never come together in one place,” he explained. “Before, all the information would live on the researchers laptops. So this is one of the great accomplishments of the census. We now have this central repository of data that can be used to inform conservationists and policy makers all over Africa.”

The fieldwork, he said, is “practically 100 percent complete. Mike Chase has just finished up in Angola, a country which has never been surveyed for elephants before—so we’re very keen to see the data from that.” Chase, a founder of the nonprofit organization Elephants Without Borders, is the project’s principal researcher.

During the coming months, the Vulcan technical teams will review the final data submitted by the surveyors, and in March 2016, they’ll share this information with the International Union for the Conservation of Nature (IUCN), the body that determines an animal’s conservation status, for further scientific review.

The IUCN will factor the new census data in its African Elephant Status Report—a document that will inform major policy decisions about elephants nationally and internationally.

Preliminary results from the census have revealed both good and bad news for African elephants.

One of the most shocking discoveries is a 53 percent free fall in elephant numbers in Tanzania—from an estimated 109,000 animals in 2009 to 51,000 in 2015. A recent study published in the journal Science, showed that for more than a decade Tanzania has been the main source of illegal elephant ivory shipped out of East Africa.

“We anticipated the decline, but not at this level.” said Edward Kohi, principle researcher for the Tanzania Wildlife Research Institute, which provided ground support for the census in Tanzania.

Kohi is a passionate yet soft-spoken Tanzanian with a PhD in elephant ecology. He chooses his words slowly, with long pauses between sentences, as if giving time to digest the gravity of the situation. “It was a bitter pill to swallow… for the government, for everyone.”

According to the census, Tanzania’s southeastern ecosystems have suffered the worst losses—in the deep miombo forests of the Selous Game Reserve and the rolling hills of Ruaha-Rungwa, areas where 80 percent of Tanzania’s elephants live.

Despite the bad news, Kohi is relieved that the message has hit home. “Without the surveys, we’d be thinking everything is fine,” he said. “It was a message to the government that something needed to be done.”

Since the census, the Selous Game Reserve has been allocated an additional 40 percent for operational and security measures in the park, and 300 rangers have been deployed to other parks, such as Rungwa Game Reserve.

Another insight from the Tanzania survey was the discovery that elephants in Ruaha National Park roam more widely than previously thought. So the government has expanded the park by 1,200 square miles (2,000 square kilometers) to accommodate their movements.

Aside from huge declines not only in Tanzania but also Mozambique (which has seen a 48 percent loss of its elephants in just five years), the census has revealed positive stories.

Botswana’s elephant population has remained stable, with an estimated 129,939 recorded in 2014 (similar to 2013). Major strongholds are the Chobe, Savuti, and Okavango areas.

Uganda showed a surprising uptick, from fewer than 1,000 elephants during the 1970s and 1980s, when poaching was rampant, to an estimated 5,000 today.

Overall, Zimbabwe has lost only 6 percent of its elephants since 2001, also surprising considering the country’s economic and political woes. But locally, as in the Sebungwe region in the northwest, the picture has been grim: a 74 percent loss of elephants since 2001.

“The big census numbers are important,” said Howard Frederick, technical advisor for the project, during an interview at the café in sleepy Arusha Airport.

“But what’s more important,” he said, “is the consistency of surveys going forward, and the trends they reveal. Conservation managers on the ground are not too concerned with absolute numbers of elephants—they really want to know whether the numbers are going up or down over time, and then they can respond accordingly.”

In the long term, Ted Schmitt and his team are looking to improve the technology, accuracy, and sustainability of wildlife surveying across Africa.

For example, the Vulcan engineers built a unique data logger unit—a computer with specially developed software—that all the surveyors put in the cockpit of the planes to make sure that they flew at the right height and precisely on track.

“The data loggers were a flying success,” Schmitt said. “We’ve given 20 to the surveyors , and we’re already looking at data logger 2.0. The problem with a lot of tech,” he added, “is that it gets developed, it gets deployed, but there’s no ongoing use.”

To ensure sustainability, all the apps and software developed for the Great Elephant Census are open source. Vulcan engineers are now working with the Tanzania Wildlife Research Institute to replace its outdated database systems with the GEC database. Talks are underway with the Kenya Wildlife Service to do the same.

Having all the information in one system will dramatically smooth the process of comparing the overall growth or decline of elephants.

“This is a big part of the story of the Great Elephant Census,” Schmitt said. “There are all these behind-the-scenes impacts that are happening out of the project that will make a big difference to data-informed conservation on a continent-wide scale.”