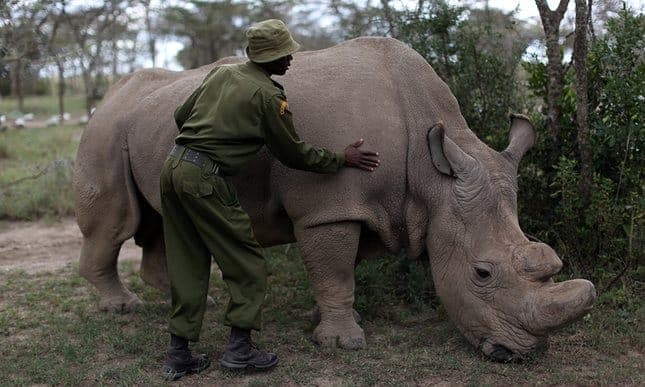 The last male northern white rhinoceros has died, leaving only two females with which conservationists hope to save the species from extinction.

Sudan, the “gentle giant” who lived in the Ol Pejeta conservancy in Kenya, was put down on Monday after the pain from a degenerative illness became too great. He is survived by his daughter and granddaughter.

To try to preserve the species, genetic material was collected from Sudan before he was euthanised. Staff at the park hope that, through “advanced cellular technologies” and IVF, his death will not signal the end of the species.

The northern white rhino has been all but destroyed by uncontrolled hunting in the colonial era and, more recently, poaching for their horns.

Sudan, who was 45, survived the species’ near-extinction in the 1970s and was taken to Dvůr Králové zoo in the Czech Republic. He was eventually moved back to Africa and, according to those who worked in the Ol Pejeta conservancy, “stole the heart of many with his dignity and strength”.

“He was a gentle giant, his personality was just amazing and given his size, a lot of people were afraid of him. But there was nothing mean about him,” said Elodie Sampere, a representative for Ol Pejeta.

The veterinary team said they had euthanised Sudan after his condition worsened over the weekend, leaving him with bad skin wounds. The rhino was unable to stand and was visibly suffering.

“We on Ol Pejeta are all saddened by Sudan’s death,” said Richard Vigne, Ol Pejeta’s chief executive. “He was a great ambassador for his species and will be remembered for the work he did to raise awareness globally of the plight facing not only rhinos, but also the many thousands of other species facing extinction as a result of unsustainable human activity.

“One day, his demise will hopefully be seen as a seminal moment for conservationists worldwide.”

The hope for continuing the species lies in artificially inseminating either Najin or her daughter, Fatu.

This article was first published by The Guardian on 20 Mar 2018.

Do we really want to be the ONLY species left? Who would we “manage” then?

If only the stupid people who believe rhino horns have magical properties, would see that rhino horn is no different from our fingernails and toe nails.

Well man should be happy now, they have achieved another of their vile goal!