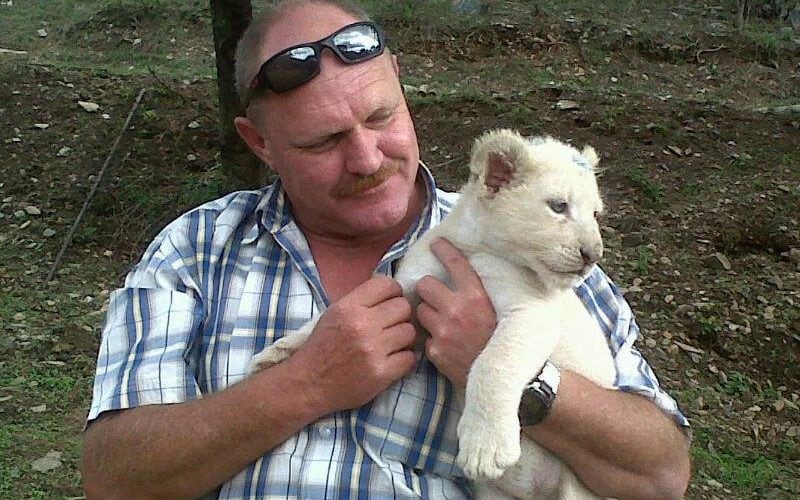 One of South Africa’s top detectives, famous for capturing rhinoceros poachers, was gunned down early Tuesday on his way to work.

Lt Colonel LeRoy Bruwer, 49, working in the Mpumalanga province, 200 miles north east of Johannesburg, was described by colleagues as a “wildlife fanatic.”

As a senior officer in the Directorate for Priority Crime Investigations, known as The Hawks, Colonel Bruwer was highly experienced in sophisticated and often dangerous investigations into rhino poaching syndicates.

Police cordoned off the road where Colonel Bruwer was killed and say there are three bullet holes on the driver’s window of his vehicle. Some rhino poachers arrested by Colonel Bruwer were former policemen

Four years ago Col Bruwer testified in court that he and a colleague were detained by police when they tried to charge two officers linked to a rhino poaching case.

He was currently lead detective in another two high profile rhino poaching cases. Col Bruwer was decorated four years ago as the best detective in the Hawks.

Advocate Kobus van der Walt, head of the Mpumalanga Asset Forfeiture Unit, said Col Bruwer was one of the most dedicated policemen he had ever worked with.

“His death leaves an incredible gap in the legal system especially in investigations into rhino poaching,” he told News24 early on Tuesday.

Col Bruwer lived close to where he was killed, not far from the Mozambique border where many rhino horns are illegally exported and then sold on to buyers, often from Vietnam.

South Africa has 80 percent of the world’s remaining rhinos and one is killed every 10 hours, according to official government statistics.

This article was first published by The Telegraph on 17 March 2020.

This is organized crime, with as the article suggests significant police corrupt involvement.
A problem with rhino horn, ivory, and other animal-part trade, is that the dead animals, and parts can be stockpiled for long periods.

SA really MUST eliminate the killing of wildlife completely, especially for trophy and by noncitizens, enacting instead severe penalties, as it is obvious that it will ALWAYS lead to this, even if the nation or human world population has no concern whatsoever for the lives of animals or extinctions of species.

Catch them quickly and Kill on Sight!!!. That is the only way to having these Greedy Scum Suckers off the Planet!!!. If only the Buyers and Sellers could be caught and Killed on the spot, then this Horror will end!!. #$%&(##!!!!

I agree with you Mark. Shoot to kill/on sight. The world doesn’t need these poachers, but we do need wildlife.

As I have said before, South Africa needs to have a “shoot-to-kill”/ “shoot on sight” statute applicable to Rhino poachers. Regardless of whether they are cops. Once the Rhinos have all been killed, they will technically be extinct except for the few examples living in captivity. There is no recovery from that.

Those in danger need to tool up and take out the threats before they act!