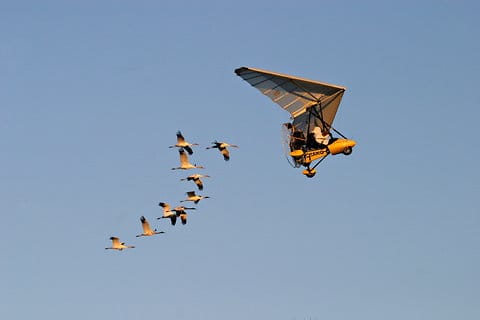 Birds and planes don’t mix, as was demonstrated strikingly three years ago when Canada geese were sucked into both engines of a USAir flight from LaGuardia, forcing the plane into the Hudson River. But it turns out that a more benign interaction, using ultralight planes to teach endangered whooping cranes their migration route, has its complications, too.

For 11 years, conservationists have used ultralights to guide the birds from Michigan to Florida. The birds are essentially orphans, raised in captivity without parents, but if they can be shown the 1,200-mile route once, they will find their way back to Michigan the following fall on their own, and fly unescorted for the rest of their lives.

The idea is a bit weird; the pilots dress up to look like birds so the fledglings will be “imprinted” with them. But everybody seems to like it; this year’s trip is underwritten in part by Southern Company, the big utility.

But now it turns out that some of these do-gooder flights face a legal challenge.

The Federal Aviation Administration classifies the ultralights as “light sport aircraft,” a category with simplified licensing rules. Such aircraft can carry only one or two people, cannot fly in congested areas and cannot fly for hire, among other restrictions.

The question is, are the pilots flying for hire?

David Sakrison, a member of the board of directors of Operation Migration and a spokesman for the group, said that it owns three ultralights. There are three pilots, all employees of the group, and nearly all of their work was on the ground, he added. The birds fly only an hour or two a day, not every day, and the pilots are volunteering their time in the air, he said.

The Flight Standards District Office in Minneapolis, an enforcement office of the Federal Aviation Administration, always accepted that explanation, he said, until last year, when two complaints were lodged.

A spokesman for the F.A.A., Lynn Lunsford, said his agency had to investigate once the complaints had been received. If it determines that this is work for hire, he said, the pilots would need commercial licenses. And no ultralights have been approved thus far as commercial aircraft, he said.

The agency is considering whether it could grant an exemption but does not know how long this process would take, he said.

While the F.A.A. sorts this out, Operation Migration said in a blog post, the birds are being safely kept in a pen in Franklin County, Ala. Precise timing is not critical, Mr. Sakrison said; the trip usually takes about two and a half months.

The birds only fly in the morning, in calm air, covering 25 to 50 miles on the days that they fly, when weather allows.

But if the dispute goes on long enough, Operation Migration may end up trucking the birds to Florida. They are still about 500 miles short of their wintering grounds.

While this particular migration program has not had any safety problems, Mr. Sakrison said, a similar one has, with the cranes getting tangled in the ultralights.

As Mr. Lunsford put it, “Birds are the last ones to follow air traffic restrictions.”

He said that Operation Migration had halted its operations “once we informed them of the potential issues.”

“We’re working to see if there’s a way they can continue with what they’re doing,” he said, adding, “We’re not holding them to any different standard than we would any other pilot.”

Here’s a video of an early-morning takeoff of an Operation Migration flight:

This post was written by Matthew L. Wald and published in the New York Times.