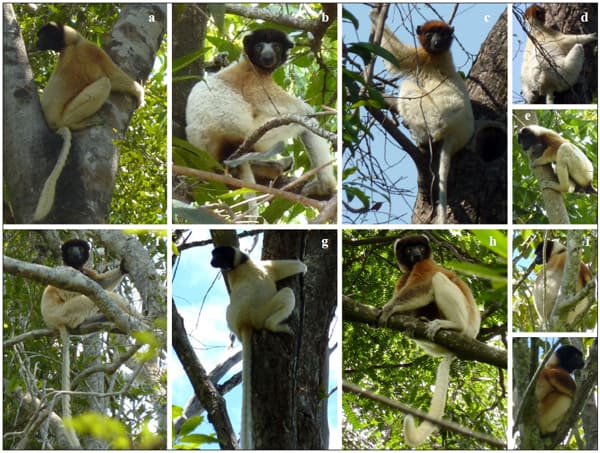 An endangered lemur has a larger range than originally believed but is still at risk due to forest fragmentation and land clearing, reports a study published in the journal Primate Conservation.

The study, conducted by researchers at The Aspinall Foundation and the Groupe d’Etude et de Recherche sur les Primates de Madagascar (GERP) in Antananarivo, assessed the range of the endangered crowned sifaka (Propithecus coronatus) in Western Madagascar. They found the species is widely distributed across the forests of Western Madagascar. Prior confusion over its range stems from its wide coat variation among its fragmented populations as well as similarities to other closely related lemurs, including Decken’s sifaka (Propithecus deckenii).

The authors say that while the findings are positive for the species, it nonetheless remains threatened.

“Our results show that P. coronatus may now be considered widely distributed through western central Madagascar, but most forests in this area are small and fragmented, and sifaka populations are highly endangered,” they write, noting threats from hunting, logging, charcoal production, fires, and disturbance by livestock.

The authors make a case that the crowned sifaka’s coloration in fact necessitates greater conservation effort in order to protect its genetic diversity.

“We therefore recommend the implementation of immediate conservation interventions to ensure the maintenance of the full range of chromatic and genetic diversity of P. coronatus,” they write.

Sifakas are among the best known of Madagascar’s lemurs for their unusual mode of locomotion, which is particularly exemplified by Verreaux’s sifaka (Propithecus verreauxi). Primarily tree-dwellers, sifakas are somewhat awkward on the ground due to their splayed feet. Since trees in their habitat are often dispersed, sifakas cross open ground by sashaying on their hind legs with arms aloft. They are sometimes likened to the ballet dancers of the non-human primate world.