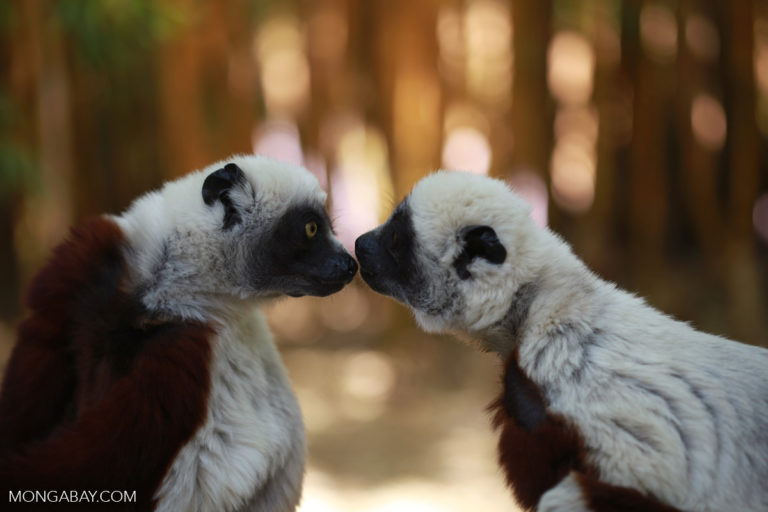 The DreamWorks version of Madagascar is exactly that, a fantasy. The island nation is no unpeopled paradise teeming with dancing lemurs, as depicted in the animated Madagascar film. On the contrary, almost all of its lemur species are being driven to extinction by humans. This World Lemur’s Day, it is worth pointing out that the Covid-19 pandemic poses a threat to our primate cousins as well.

Lemur conservation work in Madagascar can be traced back several decades, but was still in its nascency in 1986, when American primatologist Patricia Wright traveled to southeastern Madagascar in search of a ghost, an animal long believed to be extinct: the greater bamboo lemur. She found it, and she found a fight worth fighting: saving the island’s endemic lemurs. When Wright told residents there that she wanted to create a park that would attract plane-loads of tourists, they laughed. Lemurs are central to Malagasy culture, but the idea that people would travel thousands of kilometers to catch a glimpse of them was laughable.

Wright proved them wrong. Over three decades, she worked with locals to build a national park in one of the world’s most impoverished countries, where three out of four people live on less than $1.90 a day. Founded in 1991, Ranomafana National Park has over the years become one of the island’s most-visited attractions. Then Covid-19 hit. Overnight, foreign visitors disappeared, and so did income.

Ranomafana is not alone; parks across Africa saw revenues plummet as countries clamped borders shut and imposed lockdowns in response to the pandemic.

The broader economic fallout is expected to force 26 million people in sub-Saharan Africa, including Madagascar, into poverty, as per the World Bank. Madagascar is staring at shocking levels of hunger and deprivation. “An empty stomach has no ears,” Jonah Ratsimbazafy, one of the nation’s top environmentalists, likes to say. The pandemic and its complications have made one thing clearer than ever: the fate of the country’s flora and fauna is inextricably linked to the fate of its people.

The world’s oldest island bursts at the seams with biological riches — almost 90 percent of its plants and animals are found nowhere else on the planet. What’s more, new species are described with fantastic regularity.Today, for example, there are twice as many known lemur species as there were back in the early 1990s.

But less than 10 percent of Madagascar’s primary forests remain today. A newly discovered lemur species was named for Ratsimbazafy earlier this year, but it is already threatened because the woodland it occupies is shrinking fast. Even before the novel coronavirus struck, the biodiversity hotspot was losing rich habitat to deforestation at an alarming rate.

Ranomafana is one of the last remaining refuges for Madagascar’s natural wealth. The Centre ValBio (CVB), a world-class research center established by Wright just outside the park, regularly hosts scientists and students. And the steady stream of tourists hasn’t just fueled a hotel boom; it supports a host of livelihoods, from guides to local farmers. It is a rare ecotourism-based conservation success in the country.

Still, the pressures on the island’s natural resources are unrelenting. Since Wright’s first visit in the mid-1980s, Madagascar’s population has more than doubled. Less than 20 percent of people have access to grid power. Wood charcoal is the primary source of energy, and forests are routinely cleared for firewood as well as for subsistence farming. Hardships caused by the pandemic have complicated efforts to stem the tide of deforestation and poaching and could undo years of painstaking gains.

“These people who had been making their money off of tourism, now suddenly have to go chop down the forest,” Wright, a professor at Stony Brook University, NY, said. “It could be so severe that we would end up losing all those lemurs and all that forest if Covid-19 continues.”

“I’m just terrified that everything I worked for, for 35 years, it is going to be gone,” Wright added.

As the world obsesses over how to guard humans against diseases that lurk in the wild, the danger to wilderness from the scourge of human needs and greed is graver than ever. While more needs to be done to preserve what remains in places like Madagascar, the pandemic is a moment of reckoning for the conservation community, and also a stress test, albeit an extreme one.

In Madagascar, conservation activities are funded mainly by foreign donors, most notably European countries and the US. The pandemic offers a glimpse of what could happen if outside support from tourism is curtailed, and if foreign experts and scientists aren’t on the ground spearheading conservation efforts. Will protections endure, or will they collapse?

Despite past success, Wright is also taking a hard look at what works in the long run. CVB is pushing activities like planting marketable plant species like vanilla and cinnamon. “I am certainly going to encourage that we diversify more, we cannot rely so much on outside resources, on tourism and study-abroads,” she said.

Ensuring that people who depend on forests have viable alternatives is a difficult task, but it is also critical. “Every conservation proposal that has ever been written talks about bolstering resilience, safeguarding livelihoods, addressing poverty,” Alasdair Harris, who runs the marine NGO, Blue Ventures, said. “Now is your chance to prove it.”

It is also a test of our convictions. Despite being faced with an uncertain financial future, donors and funders must dedicate more, not less, funds for conservation, recognizing that the pandemic has made conditions more challenging on the ground. Conservationists and animal lovers must also do more to ensure lasting improvements in the lives of people who do — and sacrifice — the most to protect the planet’s most vulnerable inhabitants.

If we fail, lemurs could become entirely relegated to the realm of fantastical animated films for future generations.

This article by Malavika Vyawahare was first published on Mongabay.com on 30 October 2020. Lead Image: A pair of Coquerel’s sifakas (Propithecus coquereli).Image by Rhett A. Butler/Mongabay.