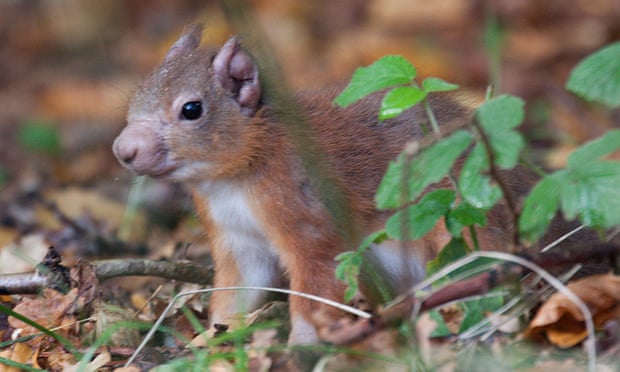 Leprosy has been found in red squirrels across the British Isles and scientists believe they have been infected with the disfiguring disease for centuries.

The endangered animals carry the same bacteria that cause the human disease, research has revealed. This results in lesions on their muzzles, ears and paws, adding to the sharp decline in their numbers caused by invading grey squirrels, which appear immune to the disease.

It is possible that humans have caught leprosy from red squirrels in the past, as their fur and meat was once prized. But the last case of leprosy contracted in the UK was in 1798, indicating the risk is now extremely low.

“We should be even more concerned about the squirrels now and not frightened of them,” said Prof Anna Meredith, at the University of Edinburgh and one of the leaders of the new study. “We have found it is widespread all over the UK and Ireland, but we don’t want people to be alarmed. It has been around a long time and there have been no human cases for hundreds of years.”

Nonetheless, Meredith said: “You need to be sensible: we don’t want people stroking them. If you find a dead red squirrel, we suggest you wear gloves to pick it up, or use a plastic bag, and wash your hands.”

The surprise discovery could help the 220,000 people in other parts of the world who get leprosy every year, by explaining why it has been so hard to eradicate the disease despite the availability of effective treatments.

Leprosy has long been considered a disease that is passed only from one person to another. But the new revelation shows it can exist in animals, and scientists will now look for animal reservoirs of disease in the places where leprosy persists. “It has very significant implications for human health,” said Meredith. Rats and mice are rodents, like squirrels, but high levels of immunity means they are unlikely to be the reservoirs.

“It is remarkable that [the leprosy bacteria] has persisted for centuries undetected in wildlife populations of the British Isles,” said Prof Timothy Stinear, at the University of Melbourne in Australia, and who was not part of the research team. “The discovery of other environmental reservoirs is critically important if we are to eradicate diseases like leprosy that have plagued humanity for too long.”

In the new study, published in the journal Science, the scientists examined more than 100 dead red squirrels from England, Scotland and Ireland and used DNA analysis to identify the leprosy bacteria. The squirrels on Brownsea Island in Dorset were found to have the strain responsible for leprosy in the UK in the middle ages. The same strain infects the only other animal reservoir known to exist, the nine-banded armadillo, which has caused some human cases in Florida.

Squirrels from the Isle of Wight, Scotland and Ireland had a different strain, which was only discovered in 2008. It causes human leprosy cases in Mexico today. The researchers think both the strains have lurked in the squirrel population for centuries and were carried to the Americas by early European settlers of the continents. Leprosy was difficult to confirm in the lab until modern molecular techniques were developed.

Treating the red squirrels for leprosy is not practical – antibiotics have to be given three times a day for six months – but the scientists will now study how the disease is transmitted between the animals.

In humans, the bacteria spreads via coughs and sneezes, though many people are naturally immune. If close contact is also important in squirrel transmission then, for example, feeders that lead the animals to congregate could be removed.

This article was first published by The Guardian on 10 Nov 2016.

I understand it’s not as bad as it could be. It’s been around for may decades and sick animals tend to be picked off more readily than healthy ones keeping any surviving animals free from disease.