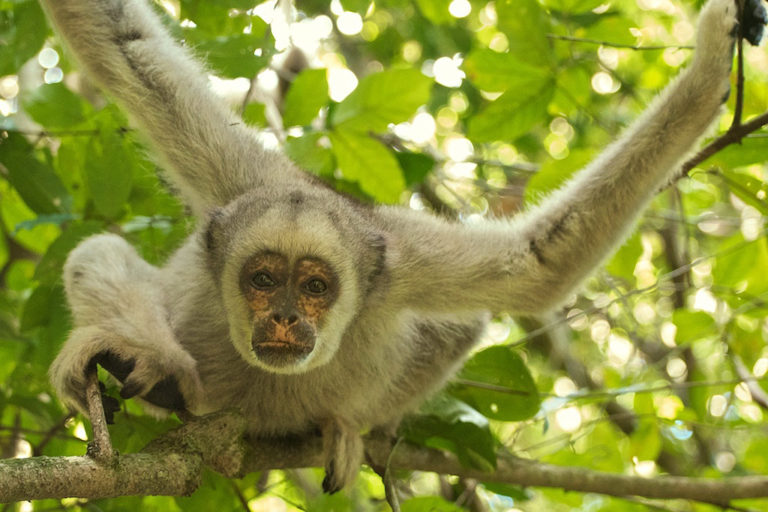 The giant panda, tiny tamaraw buffalo, riverine rabbit and Iberian lynx all have something in common: they join a growing list of animals on the brink of extinction.

A newly published studyin the Proceedings of the National Academy of Sciences lists 515 animal species with fewer than a thousand individuals remaining. Overall, the report is grim: Earth is experiencing its sixth mass extinction; extinction rates are accelerating; and humans are to blame.

Researchers evaluated 29,374 land-based vertebrates using IUCN Red List and Birdlife International data. They identified 75 mammal, 335 bird, 41 reptile and 65 amphibian species “on the brink of extinction.” The majority of these critically endangered animals are concentrated in tropical and subtropical regions, where biodiversity is highest.

More than half of the species on the list have fewer than 250 individuals remaining.

“The ongoing sixth mass extinction may be the most serious environmental threat to the persistence of civilization, because it is irreversible,” the authors write.

Previous major extinctions, like the one that wiped out the dinosaurs, were caused by catastrophes such as volcanic eruptions, depletion of oxygen, and asteroid impact. Each of these events wiped out an estimated 70 to 90% of life on Earth at the time.

Our current extinction crisis is caused by humans, driven by activities such as habitat destruction, habitat fragmentation, poaching, illegal trade, over harvesting, the introduction of non-native and domesticated species into the wild, pathogens, pollution, and climate disruption.

Many of the species on the brink of extinction will be extinct soon, according to the authors, and extinction rates will continue to increase sharply. By 2050, the extinction rate is expected to be 117 times higher than the background extinction rate of two out of every 10,000 species per century seen over the past 2 million years.

“Predictions that one-fifth of all species would be in danger of extinction by mid century and half or more by the end of the century begin to make sense,” the paper says.

Since 1900, 543 species of vertebrates have gone extinct. And those are just the ones we know of. In the past century, we have witnessed the disappearance of the ivory-billed woodpecker (Campephilus principalis), the Round Island burrowing boa (Bolyeria multocarinata), the laughing owl (Ninox albifacies), the sea mink (Neovison macrodon), and the golden toad (Incilius periglenes), to name a few.

The case of the golden toad is emblematic of massive amphibian declines, triggered by chytrid fungus (Batrachochytrium dendrobatidis), a disease that eats away at an amphibian’s skin, ultimately killing it. More than 500 amphibian species have seen chytrid-related declines over the past decades. In many countries the spread of the fungus has been expedited by the amphibian pet trade.

Invertebrates are also declining. Reports of a great insect dying, monarch butterfly declines, and the loss of bees have been widely reported, in many cases linked to the widespread use of pesticides in agriculture.

The extinction of one species can set off a cascade, leading to a domino effect of extinctions to other, interconnected species. “Extinction breeds extinctions,” the authors write. As species disappear, so to do their unique ecosystem services such as pollination, nutrient cycling, or population control toward other animals.

“What we do to deal with the current extinction crisis in the next two decades will define the fate of millions of species,” study lead author Gerardo Ceballos, a senior researcher at the National Autonomous University of Mexico’s Institute of Ecology said in a statement. “We are facing our final opportunity to ensure that the many services nature provides us do not get irretrievably sabotaged.”

The Convention on International Trade in Endangered Species (CITES) regulates the global trade of some of the world’s most endangered and threatened animals. Many animals, including endangered species like pangolins and the tigers, are traded for use as food, ornaments,pets, intraditional medicine, and as a status symbol.

In the U.S., the Endangered Species Act (ESA) has helped protect local wildlife since it was enacted in 1969. The ESA is credited with playing an instrumental role in the recovery of bald eagles, gray whales, grizzly bears and a number of other species. The ESA is also a wide-ranging international tool that governs and restricts the trade of hundreds of other endangered species abroad such as rhinos, elephants and tigers. Marine mammals and sea turtles have also been given a boost, according to more recent reports.

In 2019, the Trump administration weakened the ESA, tipping the scales to favor industry with fewer regulations. In early June, Trump signed an executive order waiving the requirements of a suite of environmental regulations including the Clean Water Act and the ESA. The order allows agencies to use the emergency provisions of environmental laws to expedite projects such as highways, pipelines and construction.

“When humanity exterminates populations and species of other creatures, it is sawing off the limb on which it is sitting, destroying working parts of our own life-support system,” said Paul Ehrlich, professor emeritus at Stanford and co-author of the new study.

“The conservation of endangered species should be elevated to a national and global emergency for governments and institutions, equal to climate disruption to which it is linked.”

See the full list of 515 species on the brink of extinction here.

This article by Liz Kimbrough was first published on Mongabay.com on 9 June 2020. Lead Image: Northern muriqui (Brachyteles hypoxanthus), a woolly species of spider monkey endemic to Brazil. Fewer than a thousand remain in the wild. Image by Peter Schoen via Wikimedia Commons(CC BY-SA 2.0).