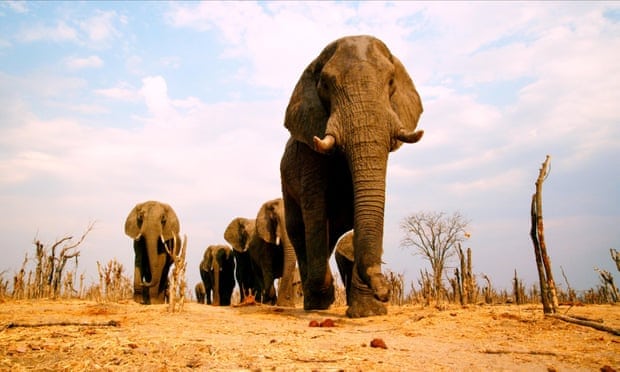 Southern African leaders have renewed calls for a lifting of the ban on the ivory trade as debate over the “unfair” embargo escalates.

At a wildlife economic summit in Zimbabwe, leaders of the five countries that make up the Kavango-Zambezi conservation area – Zimbabwe, Botswana, Zambia, Angola and Namibia – raised the issue ahead of the August conference of the Convention on International Trade in Endangered Species (Cites) in Geneva, Switzerland.

The Zimbabwean president, Emmerson Mnangagwa, told the UN-African Union summit that his country is sitting on a $600m (£470m) cache of ivory that includes rhino horns. The leaders want a suspension of the ban to allow them to shift enormously valuable stockpiles.

There were calls for an end to the international “one size fits all” legislation that, Mnangagwa said, prevents the countries from using proceeds of sales of the animal products to help their conservation efforts.

Cites’ rules, which countries and states adhere to voluntarily, prohibit trade in endangered flora and fauna, with varying degrees of protection given to more than 35,000 species.

Mnangagwa called the embargo unfair, and said: “We remain committed to the adherence of [Cites’] protocols and rules.

“We are gravely concerned, however, by the one-size-fits-all approach. Banning of trade is creeping into the Cites decision-making processes. We call upon the institution to resist the temptation to be a policing institution but instead to be a developmental organisation to promote conservation communities and sustainable utilisation of all wildlife resources.”

He said the sale of ivory would help Zimbabwe maintain good conservation for the next two decades. Botswana’s President Mokgweetsi Masisi, who last month sparked controversy when he lifted the ban on elephant hunting, underscored the need to protect communities who, he said, face unprecedented attacks from wildlife.

Mnangagwa said Cites should commend the region for overseeing the growth in elephant population and incentivise conservation by allowing free trade.

Three nations – Namibia, Zimbabwe and Botswana, home to 61% of the continent’s elephants – have already applied for the suspension of the ivory ban, nine years after a one-off sale to China and Japan was made in 2008.

“Because of our good governance, our animals are now many. But when we say can we use them so that the people who protect them can get good houses, by selling some of the things that ought to be sold so that it benefits the communities … some of them believe that animals have more rights.

“… But people whose houses were destroyed by animals want compensation. If we could sell some of this ivory, it would go towards maintaining conservation.”

A growing human population, meanwhile, has led to people encroaching on game parks and forests.

Zimbabwe is developing a policy to limit conflict between humans and wildlife as it moves to ease friction over resources. It also wants to see the Cites ruling relaxed so it can sell more animals. Between 2012 and 2018, Zimbabwe sold 98 elephants, mainly to China.

Cites’ secretary general, Ivonne Higuero, said ivory trade would be among the topical issues for discussion at the conference in August.

She also said, however, that African countries were divided on the sale of ivory, with a coalition led by Kenya pushing for Cites to maintain the embargo.

This counter proposal, according to Higuero, seeks to place southern African elephants in Appendix I of Cites, which identifies species that are the most endangered among its listed animals and plants.

“As secretary general and hearing these proposals, I must say it is time that there was an open discussion about these issues … Countries want to have this on the table.”

Max Graham, CEO of Space for Giants, which has launched a report showing the potential for growth in Africa’s nature-based tourism, said the continent could utilise tourism as an alternative to wildlife trade.

“There are many alternatives that can earn Africa’s governments and its people rewards from their wildlife, while also protecting that wildlife. We would point to the huge opportunity tourism offers: it’s growing faster in sub-Saharan Africa than anywhere else, and visitor numbers could double by 2030,” Graham said.

This article was first published by The Guardian on 26 June 2019.