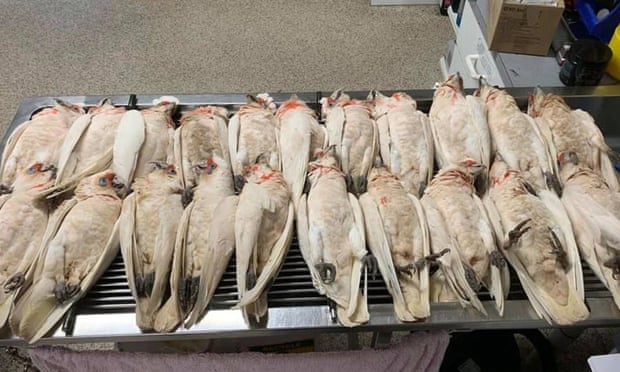 Nearly 60 native birds have died after they fell out of the sky in front of horrified onlookers and a nearby primary school in a suspected case of mass poisoning in South Australia.

Bird rescuers said it was like “something out of a horror movie” as dozens of birds fell, bleeding from their eyes and beaks at One Tree Hill near Adelaide.

Sarah King, the founder of Casper’s Bird Rescue, said one of her staff discovered the birds on Wednesday.

“Only two or three were actually deceased. The rest were just screaming on the ground. They couldn’t fly any more, they were bleeding out of their mouths … What we were seeing was something out of a horror movie.”

Since then, rescuers have found a total of 60 birds – of which 58 have died.

One particular species of corella is considered a pest in South Australia. The little corella is listed as unprotected by the state government and in March a local council proposed that they be culled by gassing.

But King said the overwhelming majority of the birds killed were of a different species – the long-billed corella – which is protected.

She also said the type of poison used was a “horrific, slow death” that takes weeks to kill and was needlessly cruel.

This isn’t the way to deal with anything. It’s also against the law

“It’s not an instant death. It causes suffering. It takes a few weeks for it to work. It starts internally and they have internal bleeding. It is a horrific, slow death.

“[And] the birds that have been affected are the protected species of the long-bill corella. It is an important fact to get out there. Of the 60-odd that we found, only three were the non-protected species.

“This isn’t the way to deal with anything. It’s also against the law.”

Vets are preparing a toxicology report, but the results have not yet been completed.

“We believe it was a targeted thing, but that is only speculation,” King said. “We don’t know what poison it is at this stage.”

The Alexandrina council in SA, which proposed gassing little corellas, describes the birds as a source of “nuisance to our community”.

“While some people do enjoy seeing little corellas in the environment, large flocks in urban and rural areas can cause considerable problems.

“Little corellas cause damage to built infrastructure such as buildings, stobie poles, lights, timber structures and sporting equipment … they also cause significant damage to vegetation including trees and crops.

“Not only do these birds cause significant vegetation damage, other wildlife species within our region are also being impacted, including the displacement of other native bird species, native bees, possums and the like.”

This article was first published by The Guardian on 12 July 2019.

Absolutely shocking. They are very intelligent birds, surely there are other ways of scaring them off than poisoning, if, they are a nuisance, culprits should be answerable to their actions.