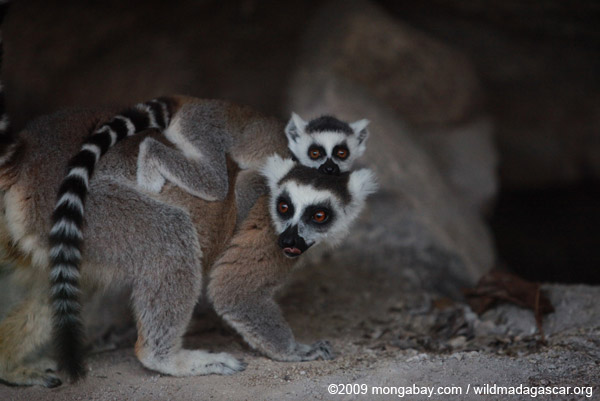 After playing, feeding, and socializing in trees all day, some ring-tailed lemurs (Lemur catta) take their nightly respite in caves, according to a new study in Madagascar Conservation and Development. The findings are important because this is the first time scientists have ever recorded primates regularly using caves (see video below).

“The remarkable thing about our study was that over a six-year period, the same troops of ring-tailed lemurs used the same sleeping caves on a regular, daily basis,” said the lead author, Michelle Sauther, with the University of Colorado Boulder. “What we are seeing is a consistent, habitual use of caves as sleeping sites by these primates, a wonderful behavioral adaptation we had not known about before.”

Lemurs are ancient primates that today are only found on the island of Madagascar. Despite being regulated to a single island, there are over a hundred species with new ones continuing to be discovered.

Although there have been reports of lemurs using caves for years, this is the first research that has documented cave-sleeping as a consistent behavior over a long period of time. Other primates have also been reported to use caves including Fusui langurs and South African baboons; but the first is believed to have only moved to caves when their forests were cut down, while the latter has not yet been verified.

“We think cave-sleeping is something ring-tailed lemurs have been doing for a long time,” she said. “The behavior may be characteristic of a deep primate heritage that goes back millions of years.”

Not all ring-tailed lemurs slumber in caves though. Populations that live in forests along riverbanks sleep in tall trees. It’s only those that are found in Madagascar’s spiny forests—dry forests with vegetation covered in thorns—that spend their nights in caves. The scientists theorize that the limestone caves are simply more comfortably than thorny bushes and safer from the fossa. Related to the mongoose, the fossa (Cryptoprocta ferox) is the primary lemur-predator on the island—other than humans. The fossa is the largest animal in the Euplerinae family, another group of mammals only found on the island.

The ring-tailed lemur is currently listed as Endangered by the IUCN Red List. Like most of the country’s lemurs, it is imperiled by habitat destruction. Deforestation is rampant across much of Madagascar, which is one of the poorest countries on Earth exacerbated by a booming human population and environmental degradation.

According to the Red List, 91 percent of the world’s lemurs (94 out of 103 species) are threatened with extinction, putting conservationists in a race against time to preserve the island’s remarkable natural heritage as well as a wholly distinct family of primates.