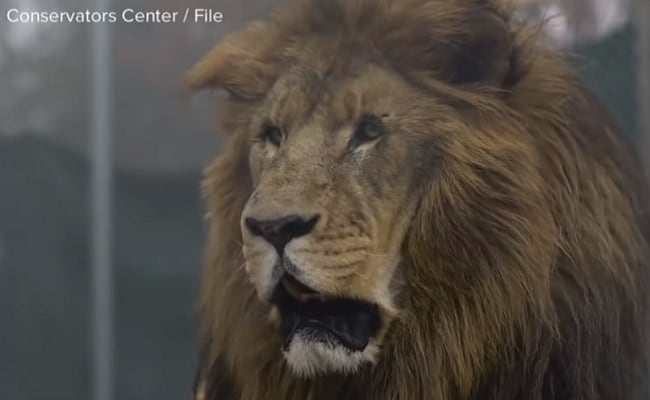 As his enclosure was being cleaned by staff at a North Carolina wildlife facility on December 30, a lion named Matthai managed to escape from his locked holding pen. Matthai fatally mauled one of those workers, 22-year-old Alexandra Black. She was an animal husbandry intern who had only been on the job for 10 days.

When Caswell County Sheriff’s Office deputies were called after the attack to Conservators Center in Burlington, the facility’s co-founder, Douglas Evans, was preparing a tranquilizer dart, but it broke and couldn’t be removed from the tranquilizer gun. According to the police report,Evans went home, got a blow dart and used it to shoot Matthai with three tranquilizer darts.

Matthai showed no signs of sleepiness, so a responder used a fire hose to try to get the lion back into the holding pen. When that didn’t work, a police sergeant shot Matthai near the shoulder with a 12-gauge shotgun.

“This is the worst day of my life,” Mindy Stinner, co-founder and executive director of the Conservators Center, said at a news conference. (Black and Matthai would very likely agree with her, if they could.) “We’ve lost a person. We’ve lost an animal. We have lost the faith in ourselves a little today.”

The Conservators Center’s mission, according to its website, is to reconnect people with wildlife. “Howl with wolves. Oof with lions. Chuffle with tigers,” says the home page. “Roar with lions from 5 feet away!” It was co-founded in 1999 by Stinner and Evans as a privately-owned nonprofit sanctuary and rescue. In 2007 the facility changed its focus and began offering public tours. “We like to think of ourselves as kind of a community zoo,” Stinner has said.

More than 16,000 people visit the Conservators Center each year to see 85 animals of over 21 species, including over a dozen lions, three tigers and two leopards. “Some arrive young and healthy, some elderly or ill, and some are even born here,” according to the website.

Matthai was one of the animals born at the park. His mother gave birth shortly after she and 13 other lions and tigers were re-homed there following a 2004 USDA-assisted confiscation from alocation with “unacceptable conditions,” according to the Conservators Center.

As far as the conditions at Conservators Center are concerned, it is licensed by the USDA, which most recently inspected the facility in April 2018 and found no problems, WRAL reports. But USDA licenses aren’t difficult to obtain, according to Humane Society of the United States (HSUS) Acting President and CEO Kitty Block. “The barest minimum with practically very little oversight,” she told ABC11.

The Conservators Center is not accredited by the Association of Zoos & Aquariums (AZA), which requires these facilities to follow standards regarding animal management and care, including regular escape drills. In a statement regarding the tragedy, the AZA said most of the facilities licensed by the USDA to keep dangerous animals are not accredited.

The state has launched an Occupational Safety and Health Division (OSHA) investigation of Conservators Center. In the meantime, the facility is indefinitely closed to the public. Should it ever reopen? For the safety and welfare of the animals and employees, the answer is a resounding no.

Conservators Center is located in North Carolina, which happens to be one of only four U.S. states– Alabama, Nevada and Wisconsin are the others — that allow the private ownership of exotic animals. Becauseof the inherent danger,many groups — including the American Veterinary Medical Association, Centers for Disease Control and Prevention, American Bar Association and HSUS– oppose this policy.

Hopefully her death, as well as Matthei’s, will not be in vain. This tragedy should motivate North Carolina to change its current laws and push Congress to enact a federal law to help prevent the loss of more innocent lives.

Sluka told me Black would want people to “remember the lion who also had to lose his life…I know Alex wouldn’t want anyone to forget Matthai.” The Conservators Center says Matthai was born at the center, and was 14 years old. #WRAL pic.twitter.com/y9S73gzwqE

Join more than 86,000 people who have signed this petition urging the U.S. Congress to pass the Big Cat Public Safety Act (HR 1818), which would make it illegal in every state to privately own lions, tigers, cougars and other wild animals.