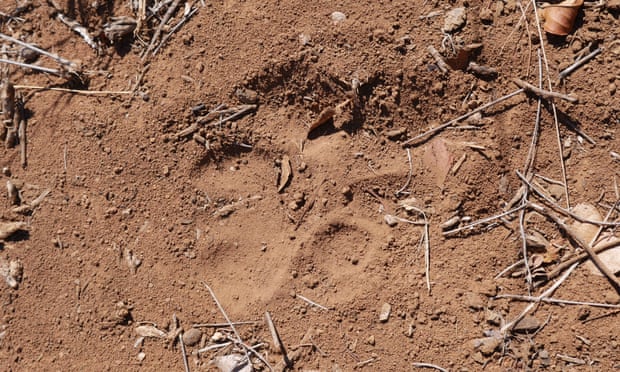 The print is female. A bigger male print is soon spotted, also leading towards a precious water hole, then a smaller one. “A cub, less than two years old,” he says.

The anti-poaching patrol continues its careful tracking across the parched landscape of Limpopo national park (LNP) in Mozambique. Hippos wallow nearby, crocodiles sun themselves and baboons yell alarms calls at the rangers – but the team don’t find the lions.

Everatt, from the global wild cat conservation group Panthera, is pleased nonetheless. “I’m so happy – at least there are still lions here.” The ghost pride, who live along the Machampane river, have very good reason for being elusive – they have been deliberately poisoned three times since 2015. Nine lions died, their faces and paws hacked off by the poachers, and the Limpopo park’s lion population is in freefall.

The targeted poaching attacks are a new and horrific danger to lions, which were already under serious threat across Africa from destruction of habitat and the snaring of their prey for bushmeat. There are now fewer lions left than elephants.

“Poaching has the potential to be incredibly detrimental to Africa’s wild lions,” says Everatt. “This is something we definitely didn’t need – another huge challenge.”

“It happened really fast in Mozambique, and it could happen really fast in the rest of Africa,” he says. Lion poaching has already been reported from Zimbabwe, South Africa, Tanzania and Uganda. “You could end up with the only place left with wild lions in Africa being Kruger national park,” a well-protected refuge across the border in South Africa, he says.

The poaching problem is especially worrying because it is far easier to poach lions than elephants or rhino. Lions scavenge, so poachers only need to snare an antelope, poison the carcass with pesticide and wait.

“I feel like I am racing the poachers to find the lions, and they have the advantage because they don’t actually have to see the lions,” says Everatt. “Lions are much easier to kill than to study.”

On the way back from the patrol, Everatt stops his Land Cruiser to watch African white-backed vultures circling a couple of hundred metres away – they could signal a predator kill and, perhaps, lions. Striding off, he kicks a rusted blue enamel bowl discarded in the dirt. “Poachers,” he spits.

There are 20 or more vultures roosting in a tall dead tree, suggesting a big animal has been killed nearby. He walks downwind: “I use smell all the time, so much so that the smell of a rotten animal is actually good to me now. I have found a lot of poaching incidents this way.” But, again, no lions are found.

Even technology doesn’t guarantee a successful search. The day before, Everatt searched for a big male, Culu, who roams between Mozambique and Kruger national park, coming close to some infamous poaching villages. Everatt has collared Culu, but standing on top of his vehicle with an antenna listening for a radio beep, he found the lion elusive this time.

“I think Culu is going to be poached,” he says. “It is kind of inevitable. There are a lot more poachers than rangers.” LNP is roughly seven times the size of Greater London in the UK but has just 100 rangers in the field.

Time is against the Limpopo lions. Their numbers have crashed from 66 to 21 in only five years, according to survey data soon to be published by Everatt. Based on the prey available, the area should support up to 200 lions.

“Targeted poaching has emerged over the last few years to be the number one threat to the viability of these lions,” he says. “The decline is so steep that you would not expect lions to be around in the park in a couple of years’ time.” The change from 2014 is so stark that Everatt thinks that must be when criminals first showed up wanting to buy lion parts.

Who is driving the demand for lion teeth and claws is unclear: illegal trade is by its nature shady. But they have turned up alongside elephant ivory and rhino horn in shipments destined for east Asia. There is also a local market in southern Africa for use in traditional magic.

A few poached lions have also had their bones removed, potentially linking them to the controversial legal trade in farmed lion bones in South Africa. With just a few thousand tigers left, lion bones are now being used as replacement in Asian tiger cake and wine.

Camera traps set for wildlife in LNP have snapped poachers returning from Kruger with tusks and rhino horn. But rhinos, already wiped out in LNP, are becoming rarer, so it appears lions are now being targeted as another way to make money, says Everatt: “A lot of the time it is the same people, and often on the same trip.”

The most recent poaching attack in LNP hit the ghost pride in January: four lions died, along with dozens of vultures. One of Everatt’s team broke down in tears at the sight of the mutilated carcasses.

“It’s gruesome and I do have an emotional reaction, but I try not to,” he says. “You couldn’t deal with it if you did. It just keeps happening.

But such sights spurred Everatt to set up his six-strong Lion Unit in LNP. “If I had not, I think there would probably be none left.” The unarmed unit, which has seized poison before it could be used and removed many bushmeat snares, is led on the ground by Samuel Bilério, a young veterinarian and trained ranger.

“We are worrying about seeing poachers, as some have guns, but we have good morale,” Bilério says. “We are not here to fight, but to protect the lions and teach people.” Lack of education and opportunities for local people is a key issue, he says, with little tourism in LNP to date: “If I was born in one of the villages here, I would be the poacher, I wouldn’t have a choice.”

Tackling the conflict between villagers and the lions that sometimes kill their cattle is crucial, as the trade in lion parts now adds an extra incentive to retaliate.

Cornélio Miguel, the warden of LNP, says: “In the villages, they know these animals as their enemy.” Lion guardian schemes are being developed, aiming to build on successful schemes in Zimbabwe and Kenya where villagers are employed to keep cattle safe and chase off lions with blaring vuvuzelas.

The devastation of lion prey by snaring for bushmeat to eat or sell is another big problem, despite it being outlawed in LNP. One way this is being tackled is with 17 irrigation schemes to ensure food crops can survive droughts and that farmers can grow cash crops. Victor Sithole, who farms 110 cattle in the nearby village of Timhodzoene, says he has a problem with lions every few years, but adds: “The biggest issue is lack of water and grass.”

LNP is also relocating 2000 families from eight villages in LNP to outside the park. It’s a difficult choice, says Miguel: “Sometimes you have to make the right decision for conservation.”

The park authorities welcome the help Everatt’s unit is giving to their anti-poaching efforts, which have stepped up in this year. “It is a fantastic concept,” says Peter Leitner, project director at LNP. “It is showing a presence in areas we would not have got to.”

LNP has also brought in expertise from the DAG Conservation Trust, set up by a former army colonel from Zimbabwe. There are 26 people in the team and two helicopters to chase poachers.

“There have been a lot of contacts in the past two months,” says coordinator Sean van Niekerk. “They usually run. But if the guys have rhino horn, you are in for a fight.” A computer screen in their operations tent shows 12 poacher groups tracked across the park in September alone.

The lion poaching epidemic has also struck South Africa, but here captive lions – which outnumber wild lions – are the target. Tzaneen Lion and Predator Park, near Kruger, houses 60 lions and has been hit three times in three years, leaving nine lions dead and with their faces, paws and tails hacked off.

Kelly Marnewick from the Endangered Wildlife Trust in Johannesburg says 71 captive lions have been poached in the last two years: “It certainly shows there is demand for this product.” That is a worry for captive and wild lions alike, say researchers.

Andrew Loveridge, a Zimbabwean lion scientist from the University of Oxford, UK, says: “Incidents where lions have been specifically targeted by poachers are a huge concern.” Research shows “an escalating trend in the trade of lion products is an increasing threat to some national populations”.

Researchers are now trying to establish what is driving the demand, he says: “We do know that trophy hunters have been approached for access to lion carcasses [after skull and skin is removed], with up to $1,000 a carcass offered.”

In LNP, all those involved in conservation are optimistic that the annihilation of wildlife seen in past years can be turned around and that LNP has the potential to one day rival the incredible density of wildlife seen in Kruger, which is visited by 1.8 million tourists year. “LNP could be full of wildlife,” says Everatt.

“We are increasing our presence on the ground, we are seeing more, chasing more and finding more,” says Miguel. “With all our efforts we are moving to a better place – but poaching is still a challenge.”

Back out in the bush by the Machampane river, Bilério remains on the trail of the ghost pride. They remain in deadly peril. With his team, he has been their protector for six months now and remains resolute. “I will see them,” he says. “They will not die before I see them.”

This article was first published by The Guardian on 05 Nov 2018.

Appalling, money driven behavior. Poachers are puppets and controlled by unscrupulous henchmen who are controlled by east Asian and African big shots who are politically connected.