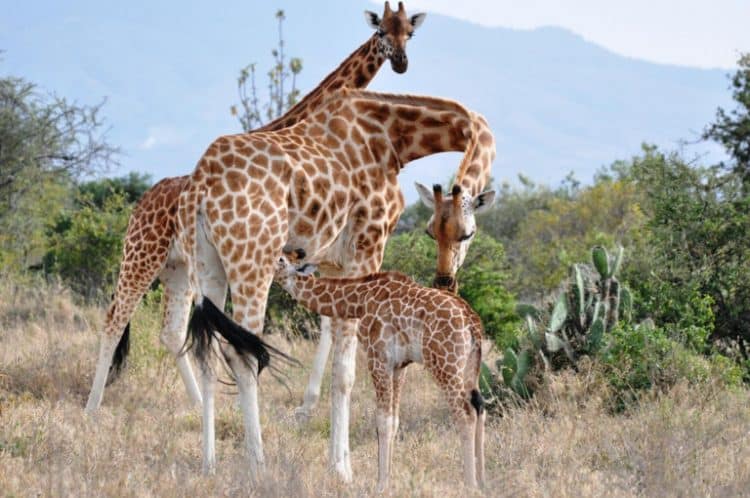 Lions put a damper on the number of young giraffes that survive to maturity, according to a new study, raising concerns about a species that has recently slipped into decline.

“It is thought that lions preferentially target giraffe calves in the wild, and there is anecdotal evidence of this,” biologist Zoe Muller said in a statement. For one thing, researchers have recorded successful hunts for baby giraffes, and females sometimes bear the telltale scratches that are the souvenirs of a run-in with lions going after their calves, Muller added.

“However, no one has ever investigated if this preference for hunting calves has an impact on the population as a whole,” she said.

Muller is a doctoral student at the University of Bristol in the U.K. and the author of the paper, which appeared in the online journal PLoS ONE on Jan. 3.

Her observations of giraffes in western Kenya between 2010 and 2012 revealed that the presence of lions can slash the number of calves under a year old by more than 80 percent. That discovery calls into question whether dwindling giraffe populations can abide such pressure.

“The continual loss of juveniles within a population due to lion predation may lead to an unrecoverable situation where the population crashes, since population growth and sustainability rely on enough calves surviving until they are sexually mature,” Muller said.

The IUCN designated the single giraffe species that it recognizes, Giraffa camelopardalis — which comprises nine subspecies across East, West and Southern Africa — as Vulnerable after a nearly 40 percent drop in numbers since the 1980s. Muller calls that a “severe and ongoing decline.”

For her research, Muller compared the age breakdown in the Rothschild’s giraffe (Giraffa camelopardalis rothschildi) populations that live in two protected areas: Lake Nakuru National Park, which has lions, and the nearby Soysambu Conservancy, which does not. She found that more than a third of the Soysambu giraffes are less than a year old, but in Lake Nakuru, that proportion is only 5 percent.

Biologists will have to undertake further research on the continent to understand if lions similarly limit the number of juvenile giraffes in other places. But only 97,500 giraffes remain, according to 2015 estimates, and Muller suggests it might be time to rethink how they’re protected in the future.

“Giraffes are a threatened species, suffering ongoing decline in the wild,” Muller said, “and this research highlights how managing giraffes alongside lions inside a conservation area (a common practice in Africa) has detrimental effects for giraffe populations.”

This article written by Z. Muller was first published on Mongabay.com on 11 Jan 2018.