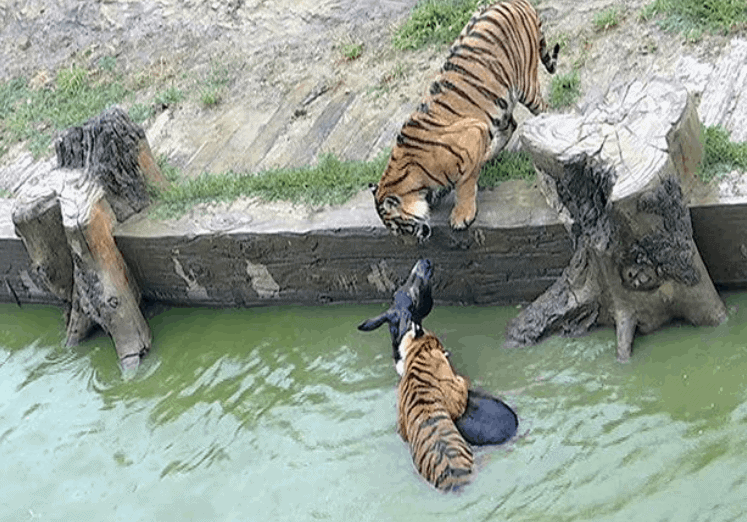 Disgruntled shareholders at a zoo in China have fed a live donkey to tigers in a protest against the management.

They also planned to feed a sheep to the tigers, before security at the zoo in Changzhou, just outside Shanghai, stopped them.

The donkey’s ordeal was filmed by a member of the public and the footage has since gone viral in China.

In the video, the shareholders can be seen pushing the donkey out of the back of a truck and down a wooden ramp before it falls into a moat in the tiger enclosure. It is quickly set upon by two tigers, and struggles for about 30 minutes before dying.

Conditions in many Chinese zoos are notoriously cruel, and guests often throw food or other objects at animals. Many animals are locked in simple metal cages or placed in barren pits.

The shareholders invested in the zoo two years ago. They have received no financial returns since then after the zoo became embroiled in a lawsuit, the zoo’s management said in a statement. All of its assets were frozen by the local court, meaning they could not be sold to pay investors.

The group of shareholders believed the court and the zoo were “conspiring to cheat small investors of their investments”, the statement said.

“Since we can’t have any benefits, we thought why not feed them to the tigers, at least we can save on animal feed,” one unidentified shareholder told local media.

Although the incident with the donkey was not sanctioned, zoos in other parts of China regularly feed live animals to tigers for the amusement of the public.

Guests visiting one tiger sanctuary in north-east China’s Heilongjiang province can pay to have a live cow or chicken hurled into the tiger enclosure.

This article was first published by The Guardian on 07 Jun 2017.

Blood thirsty, evil, delinquent bastards, how could they do this to innocent gentle animals like donkeys and sheep?

There are better ways to protest surely? And more humane ones I would have thought. This is disgraceful. I feel sorry for the tigers that are not being fed but shoving in a live animal. Come on this worse is than slaughterhouses.

Okay. Sure. Tigers are carnivores, right? But in their natural environment, a prey animal is dispatched very quickly. Nothing like the 20 minute horror show depicted in this video. It serves to point out what savages the Chinese are; life itself has little value there- even for human beings. Never mind the endangered species this culture sacrifices dailly on the alter of sexual virility. Please join me in boycotting Chinese products until these practices end. Hey, WalMart, are you listening?

Is anyone surprised? This is tame compared to the dogs that are savagely tortured prior to being butchered and eaten. Paws are slashed, they’re hung upside down and beaten to death, boiling water is pumped down throats into stomachs . . . all because they feel the adrenaline surge from the pain will make the meat taste better. Sickening doesn’t even begin to describe it!

this is absolutley uncalled for and shameful! I hope children did not see this. Make no mistake about it, We will be judged one day for what we do and don’t do. Think about what is the right thing to do before acting.

This Video alone proves to ME how SADISTIC Chinese People are.

I wonder how they would feel to be left to hungry tigers? They would be as terrified as that poor helpless donkey… disgusted is the only word I have for these less than human beings!

This is an example of Chinese compassion for animals- zero! These are the people who will cause the extinction of elephants, rhinos, pangolins, tigers and others. Sickening!

Again this PROVEs that these SIC ASIAN ASSHOLES don’t give a SHIT about ANIMALS PERIOD! Those SIC MFR’s that threw that poor donkey in that pit should be thrown in the same PIT with those TIGERS! Actually THROW ALL those ASSHOLES in the PIT–at least the Tigers would eat well for a while!

Should have chucked the shareholders in, inadequate degenerates,!!

In general Chinese society there is little concern for animal suffering. “Although (this particular) incident with the donkey was not sanctioned,” zoos in other parts of China regularly feed live animals to tigers for the amusement of the public, turtles are butchered fully conscious in meat markets, small fish, turtles & amphibians are encased alive in plastic throw-away key chain trinkets & in some of the dog meat markets dogs are deliberately tortured (chopping off their feet) prior to slaughter. It’s therefore doubtful that the Chinese Govt. would overly concern itself w/ petitions against some disgruntled zoo shareholders trying to… Read more »

Chinese are the worst& vietnamese cruelty not far behind where footage, dog intended for eating, placed in an inescapable pit then mercilessly bashed by old woman. InChina footage shows drugged tigers at amusement park offered to bash tigers with sticks, rocks etc. while held on lead on a table. Totally disgusting race of people & other Asians countries inflict crueltry to animals in rheir daily lives. Like it’s approved as one cultural enjoyment or in breeding, making them more of a disgrace to the human race. Govts. allowing citizens make their own rules re animals. Uncivilized, archaic. Try not to… Read more »

Beyond decency, dignity and compassion. Shareholders in a zoo should know better. What absolute brutality, savagery and cruelty! Incomprehensible what the poor donkey must have endured emotional, with total horror, pain and fear. China please convict these men of animal violations.

its horrible, they are 2 different petitions about

Reflects what China’s societal failures are all about!