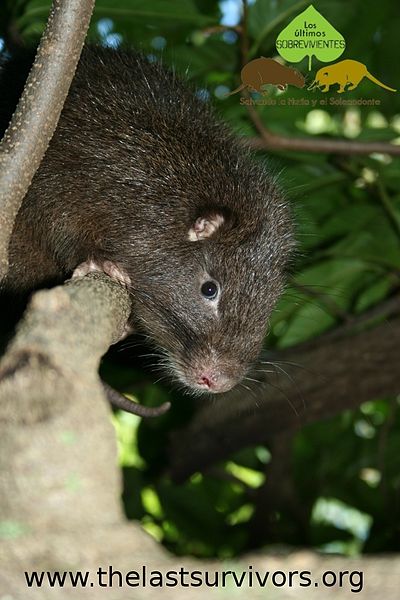 One of the difficulties of studying rare and endangered species is that they are, by definition, hard to find. Scientists attempting to understand their distributions and the threats to their survival can spend hundreds of hours in the field while collecting little data, simply because sightings are so few and far between. To find out more about rare and elusive species, scientists often have to turn to other methods, including using the knowledge of local people.

One team of researchers did just that in 2010 while trying to study two rare, elusive, and wonderfully bizarre small mammals on the Caribbean island of Hispaniola: the Hispaniolan solenodon (Solenodon paradoxus) and the Hispaniolan hutia (Plagiodontia aedium). The solenodon is a venomous, long-nosed insectivore reminiscent of a giant shrew, but belonging to its own family. The hutia is a large rodent, shaped like a guinea pig but as at home in trees as a squirrel. Both animals are nocturnal, listed as Endangered, and represent the last two species of a plethora of unique, endemic creatures that once inhabited Hispaniola, which is shared by the Dominican Republic and Haiti.

“These species are…the only survivors of the island’s once-diverse land mammal fauna, which comprised over 25 species of sloths, monkeys, giant rodents and insectivores before human arrival in the region,” lead author Samuel Turvey, of the Zoological Society of London, told mongabay.com. “Unfortunately extremely little is still known about status and threats for either solenodons or hutias across Hispaniola.”

While solenodons and hutias are secretive and hard to find, the research team was able to gain new insights by surveying local people who were more likely to have seen the mammals during their day-to-day activities. Their results are published in a new paper in Biological Conservation.

“Community interviews can represent a cost-effective method for gathering data across wide geographic areas, and can be a particularly useful source of data on species that are otherwise hard to survey directly, for example very rare or cryptic species,” adds Turvey.

“Local ecological knowledge is an increasingly used, cost-effective source of data for conservation research and management,” the authors write. “Untrained observers are more likely to provide meaningful information on species that are charismatic and easily identifiable (e.g., large-bodied vertebrates) or of socio-economic importance, and may ignore or misidentify smaller-bodied, elusive and non-charismatic species.”

However, the solenodon and hutia fall into the latter category. So, to test the extent of local ecological knowledge about the solenodon and the hutia, the researchers interviewed people on both sides of the Haitian-Dominican Republic border that divides the island of Hispaniola. The aim was to understand what local perceptions could add to scientific knowledge of these rare mammals.

“There is often a general prejudice amongst scientists that environmental data provided by untrained local people can be too biased, inaccurate and qualitative to be of any meaningful use for research purposes,” Turvey said. “However, it has been demonstrated in an increasing number of cases that, with a careful approach to the interview process, it is possible to obtain extensive and reliable data from local respondents on various aspects of biodiversity.”

To their surprise, the team found that local people were a wealth of useful information about both species, and were able to identify them from photographs and even identify causes of death.

“Our results demonstrate that LEK can represent an important conservation tool for determining status and threats for a much wider range of species than the large-bodied charismatic or economically significant taxa that have been the primary research focus of most previous interview-based studies,” the paper contends.

One of the study’s main findings is that free-ranging dogs may pose one of the biggest threats to the long-term survival of the solenodon and the hutia.

“Although dog predation in general has previously been identified as a source of mortality for solenodons and hutias in both Hispaniola and Cuba…our results reveal that most reported native mammal deaths are associated with free-roaming village dogs in contrast to hunting dogs,” Turvey said.

Such information provides new and valuable insights for species where it is difficult to determine cause of death through traditional biological surveys.

“This research has provided another piece of the puzzle to understanding the threats faced by Hispaniola’s poorly-known native mammal species,” Turvey said. “We are continuing to carry out research into various aspects of solenodon and hutia ecology, and also into techniques for improving community surveys and how to integrate local ecological knowledge into conservation.”

This article was written by Dominic Rowland for Mongabay.com