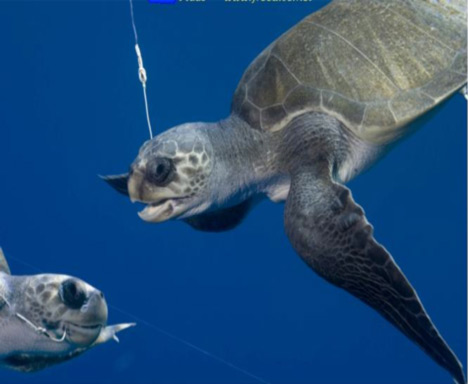 Hundreds of kilometers of commercial fishing lines slither along coastal waters in Costa Rica, hooking thousands of mahi-mahi and many other marketable fish. But when scientists scrutinized fishermen’s catch, they were shocked by the staggering number of sea turtles accidentally snagged on the lines.

A study published Aug. 20 in the Journal of Experimental Marine Biology and Ecology suggests that longline fisheries in Costa Rica unintentionally caught about 700,000 Olive Ridley turtles as bycatch between 1999 and 2010—the second highest catch after mahi-mahi. Other bycatch included silky sharks, pelagic stingrays and Indo-Pacific sailfish.

Two Olive Ridleys caught in a longline in Costa Rica. Photo: Randall Arauz.In a collaboration between Drexel University, PRETOMA and a U.S. non-profit called The Leatherback Trust, observers shadowed Papagayo Seafood S.A. longline fishing expeditions off Playa del Coco for 10 years. They recorded details of all species reeled in on the lines, noting the types of hooks and how long they were in the water.

“It’s a highly informative and unusually thorough study,” said Carl Safina, founding president of Blue Ocean Institute in New York in an interview with mongabay.com. “Most bycatch studies span a smaller area over a shorter time.”

When Olive Ridleys from nearby beaches chomp on the bait, they can become hooked. Because they surface to breathe, about 98 percent of the turtles are hauled in alive, authors say. But if a line catches fifty turtles, each weighing 60 kilograms or more, then hauling them in, removing the hooks and throwing them back overboard is challenging.

“It’s a real pain,” said Arauz. “So fishermen tend to just rip the hooks out.” The study did not monitor how the released turtles fare, but authors say that careless de-hooking may kill even more turtles.

The authors estimate that 2 to 3 percent of the turtles swallow the hooks, which usually kills the animals—a toll of about 14,000 turtles during the 10-year study, said Arauz.

The findings indicate that turtle bycatch rates have decreased each year. However, the authors believe this reflects a dwindling population, rather than better fishing practices.

Co-author James Spotila, a biologist at Drexel University in Pennsylvania, told ticotimes.net that the fishery in Costa Rica is not sustainable. This type of collapse has happened before, he said.

Authors argue that a lack of rules about when and where fishermen may work, and the equipment they may use, is hurting the marine ecosystem in Costa Rica. Closing key fisheries along the Guanacaste coast, especially during key nesting seasons between October and February, will help decrease turtle bycatch, they maintain.

But the policymakers who have the authority to change such rules also have an economic stake in the Costa Rican fishing industry, Arauz said, posing a legislative challenge.

In an interview with mongabay.com, Bryan Wallace, chief scientist at the Oceanic Society in California, said the Costa Rican governmental fisheries management agency, called INCOPESCA, does not have the same incentives to reduce bycatch. Effecting change will require a national commitment to uphold better standards, Wallace said.

Arauz warns of grave consequences if Costa Rica doesn’t follow such a course: “If they keep fishing the way they’ve been fishing for the last 30 to 40 years, there isn’t going to be anything left.”

This article was written for Mongabay.com by Julia Calderone, a graduate student in the Science Communication Program at the University of California, Santa Cruz.

Trawl fishing to much will extinct the lives of the sea turtles.

Too much trawl fishing will extict the lives of many sea turtles.