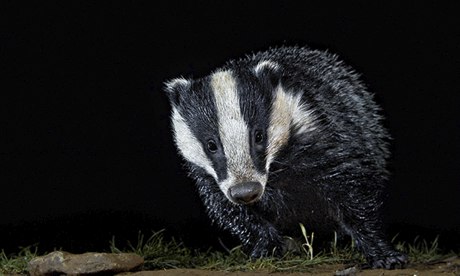 A dozen strong men to dig. A dozen good dogs wearing collars and bells to work underground. A large spade. Broad and narrow picks. Wood and iron shovels. A stout pair of long-handled tongs. Hessian sacks. Half a dozen rugs to lie on. Indian game fowls, hams and beef tongue to eat. Flagons of booze. A little pavilion for warmth in winter. “Further, to do the thing properly,” wrote Count Jacques du Fouilloux, “the Seigneur must have his little carriage in which he will ride, with a young girl of 16 to 17 years of age, who will stroke his head while he is on the road.”

Badgerlands: The Twilight World of Britain’s Most Enigmatic Animal by Patrick Barkham

These are not the resources required for a small war but the prescriptions of a popular 16th-century manual for hunting the badger.

The current badger cull being undertaken by marksmen with high-calibre rifles and police protection in Somerset and Gloucestershire is just the latest iteration of centuries of the most astonishing persecution against the largest surviving carnivore in Britain.

As the gunmen scouring the countryside with expensive infrared night vision are discovering, the badger is a formidable adversary. And men have never been able to resist its challenge.

With his small battalion of pickaxe-wielding labourers and rabid dogs, Fouilloux, a resident of Poitou, was not an aberration. Badgers were hunted with enthusiasm in France and an Anglo-Saxon riddle demonstrates that badgers were pursued with dogs before the arrival of the Normans in Britain as well. The verb, to badger, is derived from our relentless pursuit of this elusive, inoffensive member of the weasel family.

Our bloodlust is a puzzle, because badgers have rarely been considered good to eat (I tried stir-fried roadkill badger and now have a gut-instinct for why this is so) and, until they were accused of spreading bovine TB among cattle in the 1970s, have never dramatically come into conflict with agricultural interests. Unlike serial chicken-killing foxes or crop-munching deer, badgers feast mainly on earthworms. Despite this, the 1566 Act for the Preservation of Grayne designated badgers as vermin with a bounty of 12 old pence. Today’s cull marksmen are similarly incentivised, paid £10 for each dead badger with a £20 bonus for its carcass.

For centuries, badgers were part of a panoply of creatures that lived, and died, solely for our gratification. In an era when the masses took an uncomplicated pleasure in dogfights, cockfights, and the baiting of anything from a bear or an ape to an otter or a donkey, it was natural that badgers were dug from their fortress-like setts and kept in boxes in pub yards, where they would be attacked with dogs.

Badgers were a peasant beast and hunting them was a rough-and-ready village pursuit. “Betting, card-playing, ferret-breeding and dog-fancying, poaching and politics, are the occupations of the populace,” wrote Victorian writer–poacher Richard Jefferies of his childhood in 19th-century Wiltshire. “Alittle illicit badger-baiting is varied by a little vicar-baiting.”

The most vivid account of baiting was written in the 1830s by John Clare, the farm labourer poet from Northamptonshire. “When midnight comes a host of dogs and men/Go out and track the badger to his den,” he wrote. “They get a forked stick to bear him down/And clapt the dogs and bore him to the town/And bait him all the day with many dogs/And laugh and shout and fright the scampering hogs”. As Clare wrote all too accurately, the surprisingly nimble, tenacious badger was more than a match for several dogs but not a whole village, and was eventually “kicked and torn” to death.

Hunting the badger clearly satisfies timeless human impulses. David Perkins, author of Romanticism and Animal Rights, argues that baiting encompassed suspense and the vicarious experience of fear, ferocity and courage. “It was safely warlike, allowing spectators toindulge emotions of violence without danger to themselves. It satisfied whatever in the psyche makes it pleasurable for human beings to gang up on a victim.”

But the badger’s historic misfortune may be that it never became a formally hunted game animal. The class-based hunting system controlled by the aristocracy that emerged in 18th-century Britain imbued animals of the hunt with status and protection; red deer and foxes were conserved for the hunt, even more so after the enclosures enabled landowners to hold exclusive rights to game on their property. Clear rules governed how, and when, the game would be got, and by whom.

The aristocracy never pursued the badger with much enthusiasm in Britain. It did not offer much in the way of diversion – not tasty like wild fowl and never abroad in daylight hours, like the fox or deer. It could not easily be stalked, shot or hunted on horseback. If pursued, it ran quickly into the nearest sett and digging it out was a tedious task ill-suited to a gentleman. The landed gentry considered baiting “unsporting”, although they persecuted the badger – through their gamekeepers – when it was judged to mildly interfere with their absolute dictatorship over the natural world. But they weren’t interested in protecting badgers and so farm workers were free to hunt it without restraint. Baiting flourished as an affirmation of working-class community, a sport that labouring people enjoyed practising in defiance of ruling-class tastes.

Thinkers who first establishedthe Romantic notion that animals had rights assumed that poor people brutalised animals to compensate for their own powerlessness and social inferiority. Mary Wollstonecraft wrote in 1792 that those who were “trodden under foot by the rich” take revenge on animals for “the insults that they are obliged to bear from their superiors”. Eventually, parliament heeded these growing sentiments. “Baiting” bulls, bears and badgers with dogs was made illegal in 1835, and not merely because of concerns over animal welfare. Baits attracted unruly crowds which, after the French Revolution, were to be feared.

The law did not forbid baiting a captive badger, so it was perfectly possible to keep a “tame” badger in a pub yard and set dogs on it. And another form of hunting – badger digging – continued to thrive. For much of the 19th and 20th centuries, sporting authors drew a distinction between baiting and digging. The latter “sport” was supposed to end with a captured badger being released or swiftly killed rather than being tortured by dogs and so was endorsed by gentlemen such as Sir Arthur Hazlerigg, the captain of Leicestershire cricket club, and the Rev John Russell, an idle village parson obsessed with slaughtering otters and badgers who was credited with first breeding Jack Russell terriers. Badger-digging boomed in the 1960s, particularly among terrier lovers in mining towns in northern England and south Wales. Trapping a badger in its sett was considered the ultimate test for a “game” terrier and dogs were traded in newspaper adverts. “Lakeland type, 4.5 years, over 150 foxes, countless badgers … Holmfirth, Huddersfield,” read a typical offer.

After a long campaign by a new breed of badger watcher (who preferred to hunt the creature with cameras and flashguns), badgers became the first land mammal to be given specific protection in Britain. In the 40 years since the Badgers Act of 1973, persecution has dramatically fallen. Even so, tormenting badgers remains a peculiar subculture and a few men are imprisoned every year, usually when videos of dogs fighting badgers are found on their mobile phones.

Reading the old accounts of badger torture, it is tempting – but wrong – to marvel at our enlightened contemporary understanding of badgers. In the 16th century, the badger was divided into two species: dog badgers and hog badgers. One had dog-like paws; the other pig-like cloven hooves. The dog badger was a villainous, wolfish demon, devouring lambs and chickens; the hog badger was a snuffling shy-and-retiring vegetarian that ate shoots and leaves. Even today, as the academic Angela Cassidy has noted, perceptions of the badger often cleave into these categories: the diseased, out-of-control bad badger, and the harmless, snuffling good badger.

Fear, superstition and ignorance have always clung to this nocturnal species. Country people once said that if a badger call was followed by the cry of an owl it was a harbinger of death. A badger claw hung around the neck gave the wearer the power to keep secrets and the badger once played a crucial role in a form of divination: one outlandish brew contained skull fragments from a hanged man, tongues of adders, graveyard worms, toad hearts, and seven drops of badger blood.

We have a clear view of foxes – they are cunning, clever predators. But we have never formed such a black-and-white view of badgers. They have never been well represented in British folklore. Sayings show how they have always been seen as secretive, or stubborn. People were “as shy as a badger” or “as hard to draw as a badger”; intransigent folk were “as surly as a badger”, which reflected how badly badgers responded to a life in captivity. Even the shortness of its tail inspired negative analogies: “He’s that greedy he would rob a badger of its tail.”

Our lack of awareness of the species has endured. Most of us are not only blind to badgers that live a few hundred yards from our doors, but are also ignorant of their lives and needs – and what they can and cannot be blamed for.

It was a coincidence of history that bovine TB was discovered in badgers in 1971, just before badgers were belatedly given legal protection. In the decades since, we have substituted men hunting badgers with spades and dogs for culls organised by civil servants and carried out with infrared night vision. A lot has been established by science – badgers are one cause of TB in cattle – but we still don’t fully grasp the badger’s role in our countryside. We don’t know exactly how it passes disease to cattle, we don’t know how much of cattle TB is caused by badgers and we don’t yet know how to deploy a cattle vaccine. Lacking this knowledge, we shoot a native wild animal in the hope it will produce a modest reduction in a disease afflicting an inbred, factory-farmed domestic beast.

Our relationship with the badger has always been oddly confrontational. We seem compelled to find it, watch it, feed it, photograph it, poke it, catch it, torture it, defend it, kill it. It seems to be virtually a competitor on an island denuded of big mammals. Perhaps it simply plays too significant a role in our landscape for us to ever leave it in peace. When its interests clash with ours, we seek to “manage” or exterminate it, just as we can’t help ourselves in our curiosity, greed and desire to seek dominion over every other part of our miraculous world of animals and plants.

This article was written by Patrick Barkham for the Guardian.