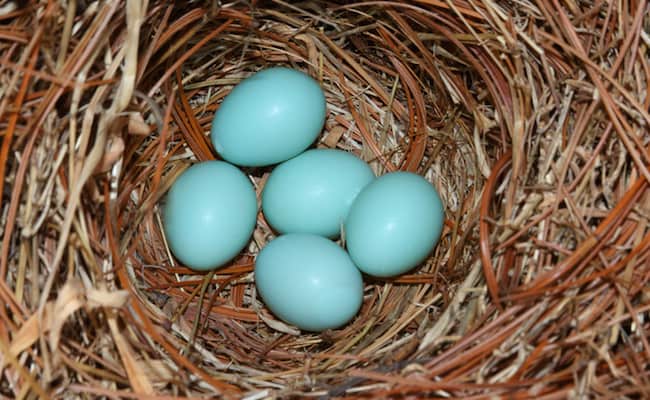 On top of all the other problems people associate with the oil and gas drilling (spills, air pollution, habitat reduction, etc.) there’s another one that goes underreported: it’s just plain noisy!

Now we’re starting to get a sense of what that noise can do to the animals whose land has been invaded by drilling operations. A newly published ecological study finds that birds have fewer babies when exposed to the loud noises of drilling.

Though past research has shown how noise pollution can significantly stress out nearby animals, this study is the first to connect that stress to reproductive issues.

For the purposes of the study, researchers set up hundreds of nests throughout a desert area for western bluebirds and monitored them over a four-year span. Comparing the number of eggs and the distance from drilling sites, the researchers concluded that the birds closest to the noise had the fewest babies.

The discovery was extra disheartening because all previous observations of these bluebirds is they seemed like one of the species that are least perturbed by noise pollution. “Surprisingly, we also found that the species we assumed to be most tolerant to noise had the most negative effects,” said lead author Nathan Kleist.

Just as worrisome is the researchers’ other finding that the babies that were born in the noisy environments were smaller than the chicks born in the quieter locations. Their feathers were similarly underdeveloped, which lowered their chance of surviving into adulthood.

“These birds can’t escape the noise,” said fellow researcher Rob Guralnick. “It’s persistent and it completely screws up their ability to get cues from the environment. They’re perpetually stressed because they can’t figure out what’s going on.”

That stress gets passed along to the baby birds that are born, too. Researchers tested the corticosterone (a hormone that indicates stress) levels of the chicks both near and far from the drilling noises and found that those born into noisy areas were chronically stressed.

To be fair, the researchers concede that other factors beyond stress could be at play. One theory is that the noise overpowers mating calls between the birds, which limits the amount of babies. Another one is that the drilling noise drowns out warnings that birds typically send to their friends, leaving the eggs more vulnerable to predators. A third theory is that the noise frightens away more of the area bugs, leaving the mother birds with less to eat.

Notice that all of those theories still put some of the blame on the heightened noise. The bottom line being that birds might seem resilient, yet drilling noises actually have consequences for the breeding of birds. If you love adorable little chicks – and the adults that they would become, for that matter – now you have yet another reason to oppose oil and gas drilling efforts.