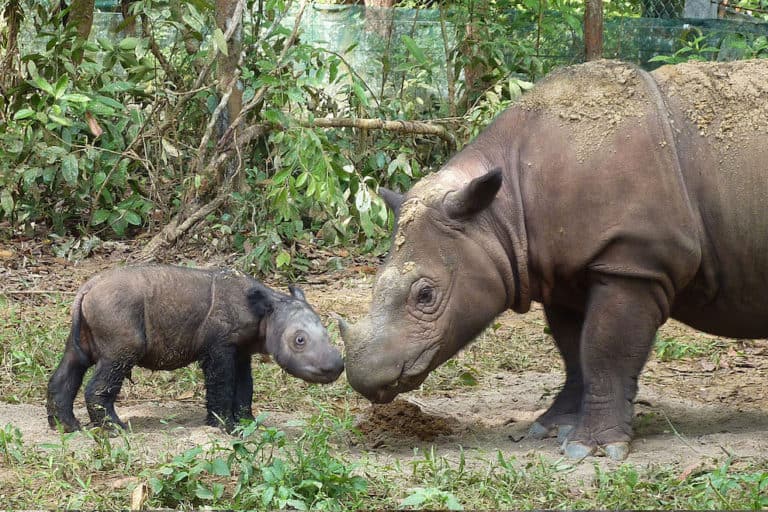 Since the 1970s, Indonesian biologist Widodo Ramono has devoted his work to the conservation of wildlife in the country, especially the iconic Sumatran rhinos. While experts like Widodo have learned plenty about the species, much remains mysterious. They are always learning more about what makes the animal tick.

The latest surprising development has been a complicated love triangle among three rhinos at the Sumatran Rhino Sanctuary (SRS) in Indonesia’s Way Kambas National Park, Widodo told Mongabay during a recent visit to the facility. The three animals involved are Andalas, Ratu, and Rosa — likely the most reproductively viable captive rhinos.

Conservation work on the Sumatran rhinoceros is largely focused on efforts to produce as many calves as possible from captive animals.

The wild population of the species is believed to number no more than 80 individuals, scattered across a several habitats in Sumatra and Borneo.

These remaining populations are so small and fragmented that experts fear they cannot support a birth rate that exceeds the natural death rate. Without a robust captive breeding program, the population could simply dwindle to extinction.

Over the years, captive breeding attempts have yielded both successes and failures. Beginning in the 1980s, 40 wild rhinos were captured and brought to zoos and breeding facilities in Indonesia, Malaysia, the U.K. and the U.S. Almost all died without offspring; the first successful captive birth came in 2001, at the Cincinnati Zoo in the U.S.

That calf, named Andalas, was later transferred to the Way Kambas sanctuary where he has successfully fathered two calves with a female named Ratu who was born in the wild near Way Kambas. The pair’s first calf, Andatu, was born in 2012. His sister, Delilah, followed in 2016.

In 2016, hoping to have more females producing calves, Widodo and his team decided to try mating Andalas with a second female held at the SRS. The female, Rosa, is possibly the last rhino from Bukit Barisan Selatan National Park, a once-thriving rhino habitat that stretches the western coast of Lampung province.

Sumatran rhinos can get rough when they mate: they ram and bite each other, and males sometimes even lift up the females. It can be life-threatening for the animals. According to Widodo, though, Andalas was “kind” to Rosa during the mating process.

“He liked her. We were excited that he mated with Rosa and she didn’t get severely injured,” Widodo said.

Although the pair successfully mated, Andalas and Rosa did not produce any calves. Rosa would get pregnant, but the embryos were not viable. According to Widodo, Rosa lost seven pregnancies due to blighted ova.

In 2018, Widodo’s team tried to mate Andalas with his previous mate Ratu, hoping for another successful birth. “But, she refused. We don’t know why,” Widodo said. His assumption is that Ratu refused to mate with Andalas because she could smell a trace of Rosa on his body.

“Right now, her [Ratu’s] keepers are putting in a lot of effort so that she wants to mate with Andalas again,” Widodo said. In the process, they are learning about how to persuade a rhino to mate. “This is difficult. Being a matchmaker for rhinos isn’t easy.”

Incidents like the affair between Andalas, Ratu and Rosa have prompted Widodo to call on wildlife experts to learn more about the psychology of the species. Widodo says this knowledge could be key in producing more baby rhinos. “That’s the strategic way to save this species —in fact this genus — of the Sumatran rhino,” he said.

This article by Basten Gokkon was first published on Mongabay.com on 27 December 2019.