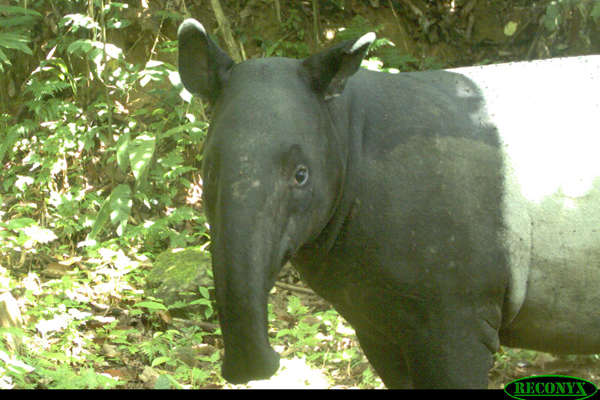 You can’t mistake an Asian tapir for anything else: for one thing, it’s the only tapir on the continent; for another, it’s distinct black-and-white blocky markings distinguishes it from any other tapir (or large mammal) on Earth. But still little is known about the Asian tapir (Tapirus indicus), including the number surviving. However, researchers in Malaysia are working to change that: a new study for the first time estimates population density for the neglected megafauna, while another predicts where populations may still be hiding in peninsular Malaysia, including selectively-logged areas.

“It has been difficult for scientists study [the Asian tapir], probably because it’s a very shy animal,” Gopalasamy Reuben Clements, co-founder of the Malaysian research group Rimba and an author on both of the studies, told mongabay.com. “Or maybe aspiring tapir researchers just haven’t tried hard enough! But interest in research on the Asian Tapir has picked up in the last 10 years.”

Tapirs are rare survivors of the Pleistocene extinction when many of the world’s big animals (i.e. megafauna) vanished forever. Although the Asian tapir, also known as the Malayan tapir, is the largest of the four tapir species (the rest of which are found in South and Central America) weighing up to 1,200 pounds (540 kilograms), it is also the least known. However, a recent breakthrough came when researchers undertaking a camera trap study on tigers in Gunong Basor Forest Reserve found that they could tell individual Asian tapirs apart based on their markings as well as other features.

“If you look closely…the belly and neck lines are distinct enough for individual identification, provided that the camera trap pictures are clear and show the right angles of a flank or neck. In addition, deep scarring and even damage to the ears or deformities can also be used for individual identification,” explains Mark Rayan Darmaraj, with WWF-Malaysia and the University of Kent, and an author on both studies as well. “By using these unique features, we were able to know more about the population status of tapirs in our study area.”

By identifying individuals, the researchers were able to compile the first Asian tapir density, estimating that 9.49 adult tapirs live in 100 square kilometers of selectively-logging forest in Malaysia. This is an important milestone for estimating total population and trends for the Asian tapir across its habitat. Next the researchers looked again at possible tapir habitat—including primary forests and selectively logged areas—in peninsular Malaysia.

“Our models predicted that approximately 37 percent of peninsular Malaysia contains potentially suitable Asian tapir habitats, of which 45 percent occur in selectively logged forests,” Clements, who is affiliated with James Cook University and University of Malaya, says. “Overall, we have shown that this species has a wider geographic range than previously thought and we urge a revision to its extent of occurrence in the IUCN Red List distribution map.”

Combining the findings from both studies, one could infer that the population of Asian tapirs in Malaysia could be well-over 2,000 adult animals. This is good news, as the estimate is higher than the one currently used by the IUCN Red List.

However, Clements cautions that more data will be needed before scientists are confident of these numbers.

“We feel it is unwise to extrapolate a population estimate for this species at this juncture because we have only one density estimate from a logged forest,” he notes. “I think we should attempt an extrapolation once we have more population density estimates from other forest types and categories, particularly those based on a spatially explicit capture-recapture framework.”

Still, the studies show that selectively-logged forests are important habitats for Asian tapirs, adding one more reason not to convert logged forests into monoculture plantations.

“For [both] tigers and tapirs, selectively logged forests represent altered but useful and important habitats for these species. It is difficult to generalize about the effects of logging on tapirs, but we have enough information to hypothesize that strictly controlled and sustainable selective logging itself may not be directly harmful for tapirs,” Rayan explains, adding that logging may still mean trouble for tapirs if it opens the forests up to poachers. While tapirs are not targeted by hunters in Malaysia, they often fall prey to snares set out for other animals.

“The take home message is, logged forests…have a high conservation value for tapirs and possibly other large mammals and therefore should not be converted into other landuse such as monoculture plantations,” he says.

Clements adds that, “Probably the most immediate threat to this and other mammal species in [Malaysia] is the increasing trend of clear-felling selectively logged forests for timber-latex rubber clone plantations. Apart from addressing this threat, we should continue implementing actions to link fragmented tapir habitats.”

Another lesson from the research, is that remote camera trapping projects—even when they only target one specie—can teach us much about an ecosystem.

“Our findings highlight the importance of making the best of by-catch data from camera trap studies to get population density estimates for non-focal species,” Rayan says. “In our case, the study was designed for tigers, but we were also interested to see if we could derive a density estimate for tapirs. We now have baseline information on the population density of Asian Tapirs in one selectively logged forest.”

He adds that researchers may now turn to other camera trap studies in tapir areas to gather more data on the species’ population.

The Asian tapir is currently listed as Endangered by the IUCN Red List. In addition to Malaysia, the species is also found in Thailand, Myanmar, and Sumatra (Indonesia), but less information is available regarding these populations.