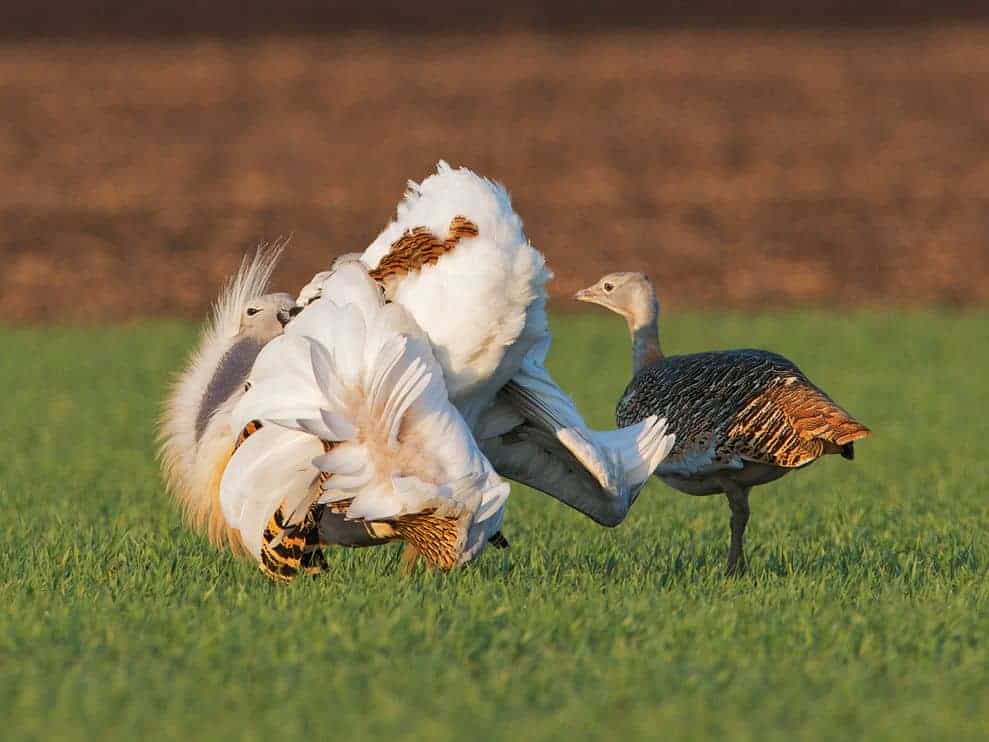 The lengths we go to for love can sometimes be dramatic – and so it is for male great bustards (Otis tarda), whose daredevil diet of poisonous beetles may actually help them get a date, a new study reveals.

Scientists already knew the large birds, which are native to parts of Europe and Asia, snack on toxic insects to clear their guts of certain intestinal parasites, including bacteria, nematodes, and tapeworms.

But the new research, published this week in PLOS ONE, shows that males eat substantially more blister beetles than females, a strategy that makes them appear healthy – and thus sexier – during courtship rituals.

If true, the findings may be the first known case of a male “self-medicating” to attract females, according to the study authors. (Also see “Watching ‘Sexy’ Males Leads to Better Chicks, Study Says.”)

This wouldn’t be too surprising for the great bustard, which already invests a lot of time and energy in wooing potential mates.

For thousands of years before Ray Charles and the Blues Brothers or Nelly and P. Diddy, the great bustard has been out there shaking its tail feathers.

During mating season, males congregate on a patch of ground called a lek and take turns trying to woo females. They contort their bodies to reveal bright white feathers on their chest and rump and suck air into a special throat sac to inflate two bare patches of skin on the neck.

To look at a male great bustard at the height of his mating pomp, you might think that the female would be attracted to puffed and preened feathers at the front. But just a few seconds of watching the dance reveals that it’s actually what’s going on in the rear that matters.

So what exactly is the female looking for?

“If I can be a bit crude, it’s probably not to see whether the male is well-endowed,” said Daphne Fairbairn, an evolutionary biologist at the University of California, Riverside, who was not involved in the study.

Instead, it’s likely that the female is evaluating the male’s cloaca—an all-purpose hole that serves reproductive, urinary, and intestinal functions—to see if it might give her a sexually transmitted disease. (By the way, this kind of mating is sometimes called a “cloacal kiss,” which is about as lovely as bird sex gets.)

Because the male’s cloaca is surrounded by bright white feathers, the scientists believe the female estimates the male’s relative health by looking for the presence of bacteria-induced diarrhea. Similarly, nematodes and tapeworms can sometimes be spotted peeking out of the cloaca. (See “Wild Romance: Weird Animal Courtship and Mating Rituals.”)

Not only does the male present his cloaca prominently, but the female pecks at the area repeatedly. Only three other species are known to do this.

The great bustard is one of the few animals in the world that can stomach certain species of blister beetles (Berberomeloe majalis and Physomeloe corallifer). The insects produce a potent toxin called cantharidin, which can be exuded as a blood-red goo.

Great bustards of both sexes have been observed to eat blister beetles, though usually only one to three beetles at a time. If the birds eat too many, they can become intoxicated and die, as other animals do. However, Juan Carlos Alonso, the study’s project leader and research professor at the National Museum of Natural History in Madrid, said that just the right amount of blister beetles may kill the great bustard’s parasites or at least persuade them to look for a new host.

“Males are more affected by these parasites due to the stress put on males during mating displays in the spring,” said Alonso.

In the experiment, the team analyzed many feces samples collected from wild great bustards in central Spain. Distinguishing male and female samples was easy, because the sexes don’t mingle when they’re not courting.

Alonso and his team argue that males that eat the proper amount of beetles are less likely to have parasites and are therefore more likely to woo a female through that final inspection. (Related: “Flashier Great Tits Produce Stronger Sperm, Bird Study Shows.”)

Fairbairn stresses that the findings are interesting but far from definitive.

“What they’re suggesting is a cool idea, but that’s all it is at this point. As they acknowledge in the article, they really can’t show a connection between mating success and this behavior in males.”

This article was first published by National Geographic on 24 Oct 2014.